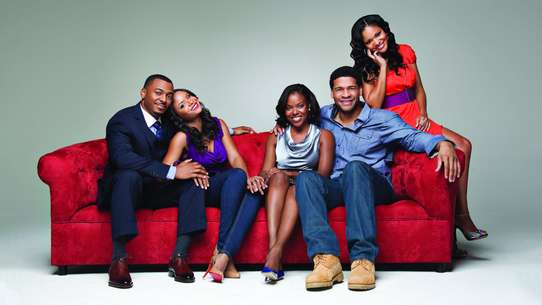 The BEST episodes of Let's Stay Together

“Let’s Stay Together” is the story of Stacy Lawrence, a pediatrician who is engaged to Charles Whitmore, the contractor she hired to remodel her kitchen. Stacy and Charles have a fun, sexy, intense dynamic. However, six months in, some of the magic of finally finding a soul mate has worn off, and they find themselves constantly renegotiating their rules of cohabitation. In contrast, Stacy’s super-fabulous younger sister Tasha and her husband Jamal act like an old married couple even though they’re only in their 20s. Tasha made a lot of mistakes in love before she found a stable, ambitious guy like Jamal so she has dedicated herself to pleasing her man and raising their six-month-old twins. Jamal considers himself lucky to have a fine, dedicated wife like Tasha even though she does bring the drama on a regular basis. Charles’ earthy younger sister Kita, a proud employee of the DMV, is celebrating her independence by taking a break from dating while she explores all that life has to offer before she settles down.

Stacy confronts Connie about a kiss in the Season 3 opener. Also, Jamal fears that Troy has feelings for Tasha; and Crystal is the recipient of a generous offer

When Stacy finds out that Charles watches pornography, she sets out to make adult material with him. Elsewhere, Kita throws her own birthday bash and is encouraged to sign up for a reality show.

Charles and Stacy install a security system in their home. Meanwhile, Crystal and her friends decide to pledge Tasha's sorority.

Stacy and Tasha's rivalry emerges when both run in a race. Meanwhile, Crystal volunteers to shoot a commercial for Charles' company.

Stacy is left to dog-sit her mother's unruly dog; Troy sends Jamal out of town on business and tries to make his move on Tasha

Charles behaves like a baby when he gets sick; Jamal and Troy become running buddies. Meanwhile, Crystal has a dating party for her college schoolmates.

Stacy aspires to be an ideal housewife; Jamal and Tasha consider a vasectomy; Charles' cousin becomes a hit on the Web.

A gift from Stacy's old boyfriend bothers Charles, so he decides to replace it; Tasha worries she's less attractive now that she's a stay-at-home mom.

Stacy hires Charles to renovate her office; Kita has romantic dreams of Jamal.

Charles hires a wedding planner since Stacy is procrastinating; Tasha becomes an entrepreneur.

#24 - Your Arm's Too Short to Box with Godparents

Stacy is offended and gets in a fight with Tasha; Jamal and Charles sneak around to see each other.