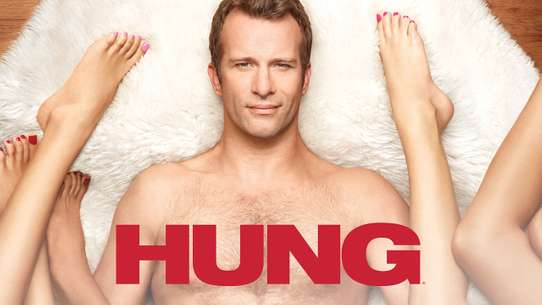 The BEST episodes of Hung

Every episode of Hung ever, ranked from best to worst by thousands of votes from fans of the show. The best episodes of Hung!

Tanya discovers that Charlie has skipped bail, and she asks Missy, the mother of Charlie's child, to help locate him. Lenore declares war on Tanya and the Wellness Center, and Sandee tries to position Jason to take Ray's spot. Ray faces concerns about his ability to satisfy women, particularly Jessica.

When his shoebox of cash goes missing, Ray goes after the prime suspect: Lenore. His investigation lands him a brand new client named Kyla. Meanwhile, Sandee offers Tanya the opportunity to expand her business.

The survival of Tanya and Ray's business depends on Charlie's whereabouts; Jessica is accused of negligence by Matt; and Lenore tries to get Sandee out of the picture for good.

Tanya takes matters into her own hands after Jason steals one of Ray's clients. Lenore discovers some surprising news about Jason. Meanwhile, Jessica tries living on her own, and Charlie asks Tanya for a favor. Ray works with a new client who likes to dress up as a cop.

Ray’s night with Kyla leaves him wondering who she really is; a competition develops at the Wellness Center; Tanya gets help from Charlie in finding out what happened to Ray’s money.

#7 - Mister Drecker or Ease Up on the Whup-Ass

Ray worries that his cover might be blown when he confuses one of his former students with a client. Tanya finds her self taking care of a convicted felon, and Jess takes a job working the Dr. Matt Kopylov's office, the husband of Ronnie's mistress. Lenore makes a deal with Jason's fiancée, Sandee.

#8 - Don't Give Up on Detroit or Hung Like a Horse

Ray and Tanya must convince a bank officer and her friend that their "Wellness Center for Women" idea is financially sound. Lenore discovers a new prospect to rival Ray.

#9 - The Middle East is Complicated

Ray must choose sides between Yael and a new client; Tanya turns to Charlie for stress relief; Lenore learns of Tanya's duplicity; Liz surprises Ray with a revelation about her personal life.

Ray's unscheduled appointment with Claire threatens his participation in a student-alumni baseball game; Frances has doubts about her affair with Mike and her business relationship with Tanya; Ronnie delivers a stern message to Ray.

Jessica turns to Ray for help with a rodent problem that may be imaginary. Rebuffed by Ray in her attempts to add Mike to her stable, Tanya gets guilt-management advice from Charlie (Lennie James), then goes to extremes to prove her success. Ray has difficulty thawing a client who is cold as ice.

Ray irritates Lenore and risks losing a client by giving Claire marriage advice. Tanya tries to prove she can land a big fish for Ray after being humiliated by Lenore during a meeting with a 60-year-old widow. Ray uses his sex earnings to pay for the school baseball team’s transportation to away games, raising Mike’s suspicions. Jessica embarrasses Darby by crashing an eat-in protest outside a fitness gym. At the end of a long day, Ray reconsiders accepting a gift delivered by his neighbor’s wife, Yael.

#13 - A Monkey Named Simian or Frances is Not a Fan

The guest list for Frances and Mike's wedding doesn't include Tanya; Ray takes back what was his after a physical confrontation with Jason; Tanya finds a connection with Charlie's kids.

After Ray tells Lydia he's leaving the business, she takes Ray and Tanya on a ride they will never forget. Darby threatens to leave home, and Lenore confronts Jason about missing a date with a client.

#15 - Even Steven or Luckiest Kid in Detroit

Ray considers leaving the business; Tanya is emotionally frayed after encounters with Damon and Vera-Joan; Jessica makes a decision about the future.

Spurred by criticism from Damon and Darby, Ray tries to prove he's not an insensitive ex-jock. Seething from the demands of her new boss at work, Tanya turns to Charlie for advice on how to deal with an even more irritable problem: Lenore. Meanwhile, Jessica feels the pinch of the economic downturn, but can't stomach Ronnie's remedy.

Tanya finally gets Francis to agree to dinner with Ray and Lenore is continuing to be a pest as usual. Ray can tell that Mike is struggling to not continue with his life and tells that he needs to look at himself and tell himself that he is wonderful. Damon goes back to the Poetry Bar and embarrasses Darby after which he has a performance "enhancing" scone and sees Jessica and Ronnie naked. Ray has to choose whether to cancel on the big client or his son who needs him.

Ray gives Lenore an ultimatum, and probes Tanya about the possibility of cutting ties with her fellow pimp. Disturbed that Damon has defiled the school baseball diamond, Ray considers Tanya's suggestion that his son find a new hobby to shake him out of his recent doldrums. Ignoring Ray's warning, Lenore offers Jessica advice in dealing with Ronnie. On his way to meet a new client, Ray has to think on his feet when he runs into Mike in a hotel lobby.

After standing him up, Jemma tells Ray they should take a break, and Ray seeks out Tanya for advice on women. Ray finds himself in an uncomfortable situation at Jessica and Ronnie's family barbeque.

#21 - Strange Friends or The Truth Is, You're Sexy

Ray's life continues to frustrate: His neighbor Koontz is on his case for urinating in the lake; he and Jessica continue to argue over the best way to parent the twins; and it turns out Lenore has disappeared, along with his wallet.

Tanya objects to the break in protocol after Jemma bypasses her to set up "dates" directly with Ray. Jessica confronts Ronnie about their finances, but he refuses to give her a straight answer. After Jemma prods Ray to open up about himself, he gives his basketball team an inspiring pep talk.

Ray, Tanya and Lenore's new partnership starts inauspiciously when Ray "holds back" during a tryst with a pregnant client.

Tanya worries that Lenore may stage a coup for control of Ray, who is unnerved by rumors of layoffs at his school.

The students of Lakefield vote for Coach Drecker as their recipient for the fundraiser but Ray finds it embarrassing. Tanya has other ideas to boost Ray's career as a gigolo.