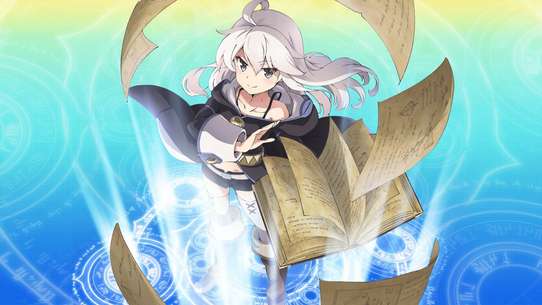 The BEST episodes of Grimoire of Zero

It was the year 526. The world knew that witches existed, and that they practiced the notorious art of sorcery. Nevertheless, the world did not know anything about the study of magic. Our story follows a half-man, half-beast mercenary; humans mockingly call his kind the "fallen beasts." He always dreamt of becoming a human, but one day, he met a witch who would change his life forever. "Do you desire a human form? Then be my escort, mercenary!" The witch introduced herself as "Zero," and explained that she was searching for a one-of-a-kind magical tome that bandits had stolen from her lair. Entitled "The Book of Zero," the grimoire supposedly contained valuable magical knowledge that could be used to effortlessly bring the world to its knees. Thus, in order to realize his dream of becoming a human, the mercenary must accompany Zero on her journey—despite her being one of the witches he so loathed. This is the story of a haughty sorceress and a kindhearted beast. http://zeronosyo.com/

As they make their way to Latette, Mercenary teaches Zero about different aspects of the world while also warming up to Albus.

#2 - The Witch and the Beastfallen

A witch, Zero, and a half-beast, Mercenary, form an unlikely alliance to begin their quest. Meanwhile, they are being stalked by a mysterious figure.

The group comes upon the city of Formicum where they look to stay and rest. While there, Zero and Mercenary run into some trouble.

Mercenary tries to save Zero from Thirteen, only to have his plans compromised. Meanwhile, Holdem and Albus face their own problems as they try to escape their captors.

The three start their investigation into the massacre in Latette, leading Zero to meet someone from her past.

Thirteen and Zero are determined to finish what they started. Meanwhile, they learn more about Thirteen's intentions, including why he chose to become Sorcerer of the State.

Zero, betrayed by Mercenary's doubts about her, dissolves the agreement. Now alone, Mercenary finds himself helping out a young woman with a Beastfallen problem.

Albus joins Mercenary and Zero. With the new member in tow, the group heads out to a new village, but not all goes as planned.

With Mercenary, Holdem, and Albus on the run, they must figure out a way to free Zero from Thirteen's clutches.

Mercenary learns more about Holdem's past while tending to his wounds. Meanwhile, Thirteen has sinister plans for Albus.

The battle for Wenias has begun! Will Mercenary and Zero's plan come to fruition or will it fail?

Zero and Thirteen faceoff with Mercenary looking on. Meanwhile, Albus is still looking for a way out from her captor's grasps.