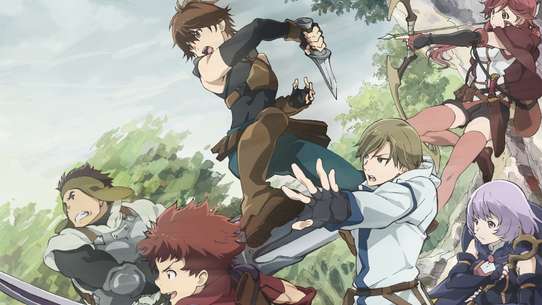 The BEST episodes of Grimgar of Fantasy and Ash

Fear, survival, instinct. Thrown into a foreign land with nothing but hazy memories and the knowledge of their name, they can feel only these three emotions resonating deep within their souls. A group of strangers is given no other choice than to accept the only paying job in this game-like world—the role of a soldier in the Reserve Army—and eliminate anything that threatens the peace in their new world, Grimgar. When all of the stronger candidates join together, those left behind must create a party together to survive: Manato, a charismatic leader and priest; Haruhiro, a nervous thief; Yume, a cheerful hunter; Shihoru, a shy mage; Mogzo, a kind warrior; and Ranta, a rowdy dark knight. Despite its resemblance to one, this is no game—there are no redos or respawns; it is kill or be killed. It is now up to this ragtag group of unlikely fighters to survive together in a world where life and death are separated only by a fine line.

Haruhiro and his party are in the Cyrene Mine. Ranta got separated from the party and is fending off kobolds alone. Can they all get out alive?

Haruhiro and his party are finally facing the same group of goblins that killed Manato. Will they be able to avenge Manato?

#3 - Between Life and Death

Haruhiro and his party encounter Death Spots and reach the floor where Mary's original party died. Will they be able to get away safely?

Haruhiro and his party continue to grow stronger and learn new skills, but an unexpected challenge changes everything.

#5 - They Were Called Goblin Slayers

Haruhiro and his party now know Mary's past and try to have better teamwork within the party.

Haruhiro and his party are figuring out how to continue fighting without Manato, and we learn about Mary's past.

Haruhiro and his party are dealing with Manato's death and figuring out what's next. Will they get their party back together to survive?

Haruhiro and his party go into the Cyrene Mine where they encounter kobolds and have to deal with Ranta's lack of cooperation.

Haruhiro and his party take the day off and use this time to rest and prepare for their next challenges.

Haruhiro awakens in the world of Grimgar. We follow him and his party as they become Volunteer Soldiers and struggle to earn a living.

#11 - Are Goblin Pouches Filled with Our Dreams?

Haruhiro and his party are enjoying their first earnings. They are getting used to life here, but continue to work hard to live.

Haruhiro and the others find a goblin they might be able to defeat. Will they finally beat their first monster?