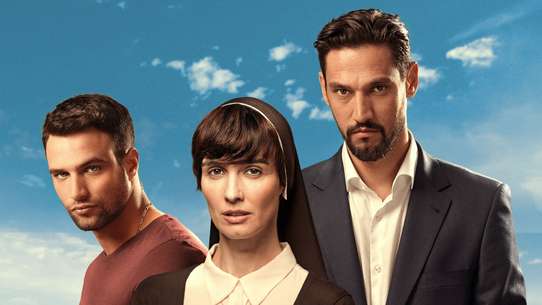 The BEST episodes of Forgive Me Father

Lucia Medina, a Catholic nun, returns to her home to confront the past. It is darker than she thought: the high unemployment has resulted in crime and drug trafficking. She decides to address the scourges even though her moral convictions will clash head-on with her acts, causing many personal dilemmas. The situation becomes even more complicated when she discovers that her nephew Rafa has starting to traffic, and that Bruno - her high school crush - is one of the local bosses.

Coming from Rome, Sister Lucía returns to Barbate, the town where she was born, after two decades of her absence. She there she meets again with the hard daily reality that her family faces. Her brother Miguel de Ella, an unemployed fisherman, is going through great financial difficulties; her sister-in-law Antonia works in a canning factory over which there are continuous rumors of closure; and Rafa, the eldest of her nephews, works for 'El Rojo', leader of a small drug gang.

When the Mexicans discover Rafa's activities, they demand Bruno's head. Lucía asks Lachambre to help her separate her nephew from drug trafficking.

Lucía finds herself overwhelmed by the family drama, while Rafa, unable to kill Bruno, spares his life and decides to give up drug trafficking and use part of the gang's funds to revive the local canning company. Lucía gets him to confess that it was Lorena who asked him to do it to exempt Lario.

Rafa and Paula's lives hang in the balance. Kidnapped by Lario, they will become the 'exchange currency' with which Bruno's ambitious lieutenant intends to make his dark plans come true. Bruno and Lucía will try to save their son.

Lucía begins teaching Barbatean teenagers at the Trafalgar Institute. While Rafa explains to Lucía that Bruno is actually a major drug lord, Doña Matilde and Father Verdaguer try to prevent the real reasons why Lucía became a nun from coming to light.

Miguel's unexpected death shocks his family and the inhabitants of Barbate. After blaming Bruno for the death of his father, Rafa swears revenge. Shattered, Antonia has a revealing conversation with her firstborn. On the other hand, the nun breaks all relationship with Lachambre.

After being wounded at the hands of Bruno's men, Rafa receives care from Lucía, the young man will end up trusting her. Lachambre receives a visit from Mexican drug traffickers.

Lucía collaborates with the Civil Guard to dismantle Bruno. With the supervision of Menéndez and Oliver, Lucía has a first contact with Lachambre, to whom she assures that she will leave the robes for him.