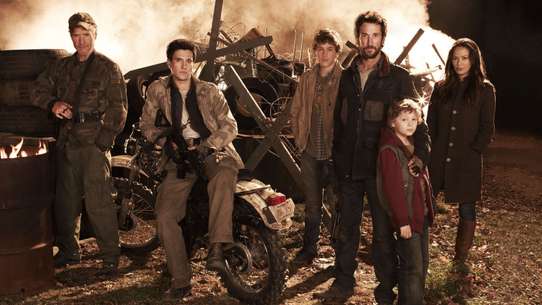 The BEST episodes of Falling Skies

After a global invasion by several races of extraterrestrials that neutralizes the world's power grid and technology, quickly destroys the combined militaries of all the world's countries, and apparently kills over 90% of the human population within a few days, the chaotic aftermath of an alien attack has left most of the world completely incapacitated. In the six months since the initial invasion, the few survivors have banded together outside major cities to begin the difficult task of fighting back. Each day is a test of survival as citizen soldiers work to protect the people in their care while also engaging in an insurgency campaign against the occupying alien force.

When skitters approach the newly combined resistance force, the groups’ interaction surprises everyone. Meanwhile, Tom finds out life-changing news just as the 2nd Mass comes face-to-face with their most dangerous threat to date.

When the 2nd Mass destroys a crucial Espheni base, a relentless enemy is taken down and the Mason family is reunited with those who had been lost. But the arrival of more interstellar players puts the fate of the Earth’s remaining survivors in doubt.

With Weaver leading several squads of fighters against the aliens, Tom remains behind to help protect the civilians as they evacuate. But a major breach in security endangers both the soldiers and the civilians. Tom is confronted with a decision that may lead him to discovering what the aliens want with the captured teenagers, humankind and the planet.

Season three of Falling Skies opens seven months after the 2nd Mass arrived in Charleston. In the interim, Tom has been elected to political office, but he has his hands full as the resistance continues to battle the alien invaders. Tom’s decision to have the rebel skitters fight alongside humans creates tension and raises suspicions that someone may be feeding secrets to the enemy. Meanwhile, Hal struggles with nightmares that seem so real, he has difficulty knowing if he’s awake or dreaming. And Tom and Anne prepare to welcome their baby.

Tom and the remnants of the 2nd Mass learn to pilot a Beamer as part of their plan to destroy the Espheni Power Core, and the group draws straws to see who will embark on the dangerous mission. The threat of death hanging over everyone triggers long-simmering confrontations between many of our main characters, ultimately bringing the 2nd Mass closer together.

Hal stumbles across bodies of de-harnessed kids and finds someone from his past. Tom and Anne grow closer. And Weaver’s health deteriorates just as Tom discovers he may have been keeping important matters from the group in order to protect them.

With the weight of humanity’s survival on Tom and Lexi’s shoulders, they must defeat Tom’s mortal enemy and find a way to destroy the omnipotent Espheni Power Core. Meanwhile, a new, terrifying Espheni Bomb is dropped onto Chinatown, immobilizing the 2nd Mass and preparing them for Human Skitterizaton.

#8 - The Price of Greatness

The 2nd Mass meets new faces, while Tom comes across his former mentor, but it’s difficult to know whom to trust. Maggie realizes that Pope may not be sticking with the group very long. Tector embraces his military past.

Ben is endangered by someone who he thought he could trust. Tom captures another hostage. Weaver offers Matt a job to lift his spirits. The 2nd Mass are trapped in a basement and face a new enemy.

Tom is haunted by memories of his time with the aliens. Pope plants seeds of doubt about him among the group. Ben’s hatred for skitters grows. The 2nd Mass locate a bridge that will help them cross the river to safety ahead of an impending attack.

With hostilities escalating between the resistance and the alien invaders, Tom calls on a nuclear specialist known as "The Rat King" to come up with a plan that will strip the aliens of their power. As suspicion continues to mount about a mole within the resistance, Tom and his leaders make a drastic decision that jeopardizes trust among the group. Anne, meanwhile, has a feeling that all is not right with her newborn.

The Masons run into trouble on the road when a family of outlaws intercepts their search-and-rescue mission. Meanwhile, looming doubts over the construction of a massive alien weapon ignite a conflict of interests. And an investigation to apprehend a killer on the loose hits a road block.

After the people of Charleston defeat another alien attack with the help of new advanced weaponry, Tom is invited to meet with a powerful leader. While Hal wrestles with an invasive evil, Ben struggles with his identity and the notion of being human again. And Anne uncovers startling new information that puts everyone in jeopardy.

Tom uncovers confidential intelligence about the heart of the alien operation. Meanwhile, Charleston prepares to mount an offensive against the Espheni, but a massive explosion brings the operation to a halt. And the identity of the mole is finally uncovered, but not before more blood has been shed.

The 2nd Mass prepares to take the fight to the invaders with an assault on one of their bases. But Weaver’s increasingly strange behavior worries Tom that he might not be fit to command. Hal and Tom encounter a left-behind woman who employed a suspicious means of surviving the invasion, making it unclear whether they can trust her.

A familiar face returns to the 2nd Mass, but his intentions remain unknown. Meanwhile, a skitter is captured and brought back to the camp as a prisoner. And Hal bonds with Maggie as she begins to open up about her past.

Weaver is still in command of the 2nd Mass, while Anne continues to serve as medic. They have seen many battles and are a much leaner unit now. Pope has taken command of the Berserkers, a renegade group within the 2nd Mass that Weaver doesn’t fully trust.

Hal finally reveals his internal struggle to everyone, and it doesn’t bode well for the Masons. Lourdes experiments with a risky new medical procedure. And Charleston’s government sees a massive shift in leadership when a group breaks away on a search and rescue mission.

#19 - Everybody Has Their Reasons

The 2nd Mass arrives at a safe haven. As the two groups make plans for the final assault on the Espheni, the 2nd Mass begins to realize that things aren't exactly as they seem.

When a mission goes terribly awry, Tom and Pope must rely on each other to survive. Meanwhile, Weaver and company search desperately for two members of the 2nd Mass who have gone missing. And Marina takes matters into her own hands in Charleston, disregarding Tom’s authority.

While members of the 2nd Mass attempt to dig out a shot-down Beamer, Tom and a small team follow the Volm to a supply cache in search of equipment to expedite the process. Along the way, they encounter a friend, and must decide whether or not to trust her. Back at camp, Maggie and Ben grow closer as he teaches her to hone her new skills, while Pope and Sara continue to clash, resulting in a fight from which they may never recover.

Weaver discovers a shocking truth about an old friend and must decide how to best protect the 2nd Mass. Maggie and Isabella are forced to work together, while the remainder of the 2nd Mass attempts an escape led by Tom.

Tom and the 2nd Mass hatch an elaborate plan to escape the confines of the Espheni Ghetto. Meanwhile back in Chinatown, after learning from Ben that Lexi has been keeping a deadly secret, Maggie confronts Lexi publicly. At the Espheni Youth Camp, Matt tries to talk Mira out of a dangerous escape plan. While trekking through the woods with her guerilla fighters, Anne has a flashback to her time in the Espheni Tower with Karen, where a terrifying secret about Lexi is revealed.

The two-year anniversary of the alien invasion is fast approaching as the people of Charleston prepare for another potentially devastating offensive. A sniper attack by an unlikely gunman creates questions and doubts within the new government. Hal believes he knows the identity of the mole. And Anne’s concern for her baby continues to grow.