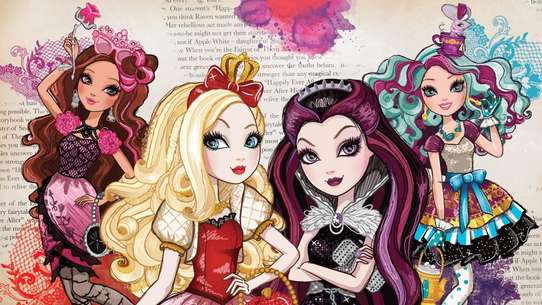 The BEST episodes of Ever After High

Welcome to Ever After High, the legendary boarding school where the teenage sons and daughters of famous fairytales learn to relive their parents' classic stories. But you can never judge a book by its cover. While the school Royals embrace their pre-written Happily Ever Afters, some of the other students want to rewrite their destinies. Will these Rebels flip the script?

Raven wants to bake Apple a poison-free birthday cake, so Briar steps up to make sure her friend has the best birthday ever after.

Daring Charming is challenged to go a date with Lizzie Hearts...and ends up being unhexpectedly charmed by her!

After the page-turning events of Legacy Day, the battle between the Royals and Rebels begins - with an epic food fight in the Castleteria.

Darling Charming uncovers her heroic side after a wild dragon sets his sights on her friends forever after.

Madeline Hatter decides to go off script and run against Apple White in the Royal Student Council Election. Will Maddie's riddlish-filled debate win over the other students, or is she putting the cup before the kettle?

Cerise Hood has successfully kept her family secret hidden under lock and key. But when Kitty Ceshire catches her up to some unusual activity in the woods, she tries to unravel her secret like a ball of yarn in front of the school.

Professor Rumplestilskin's plan of failing all the students may have worked in the past, but he may have met his match with Briar Beauty. She HAS been studying Forever After, you know. Now, if she can only keep her eyes open long enough to help the other students...

With the help of Maddie, Raven decides to go off script to find a new storybook nemesis for Apple. Her search is shorter than expected when an evil classmate steps up to blow the house down. Dun, dun, dun!

With Legacy Day being today, Apple's constant pressure, and Maddie's encouraging words, will Raven accept her destiny dutifully as the next Evil Queen, or flip the script and rewrite her path?

Hunter Huntsman tries to save Cerise Hood and her mother from the Big Bad Wolf when he unknowingly stumbles upon their family picnic in the Enchanted Forest.

All the students are getting fairest for the most hexcellent school dance, though Duchess Swan has a sneaky plan under her wing that could blow the house down on the big event.

After greeting her friends and love interest Prince Daring, Apple White meets her new roommate, Raven Queen, hoping the latter will follow her destiny to be the Evil Queen so that Apple can have her happily ever after. During rehearsal for Legacy Day, Raven Queen has questions about taking the pledge, and leaves. Headmaster Grimm tells Apple to watch over her roommate.

When Cedar Wood discovers Ashlynn Ella and Hunter Huntsman are dating, whe carves out a plan to keep her friends' spellbinding secret.

Blondie Lockes tries to uncover if she's really a Royal when the students are assigned to research their family trees.

Ramona Badwolf, daughter of the Big Bad Wolf, gets returns to Ever After High, and resumes her rivalry with Cerise Hood.

Poppy O'Hair tries to decide whether she's a Royal or Rebel—or a little of both.

Friends and teachers of Raven Queen all gather in Baba Yaga's classroom to encourage her to go all "Evil Queen" on them. Will she take their advice? Or will she flip the script and follow her heart?

Lizzie Hearts realizes that following her mother’s wicked advice may not be in the cards for her.

When Holly and Poppy O'Hair discover they were switched at birth, the fairy different twins decide to continue following the stories they always thought were their destinies.

She may be the new girl at Ever After High, but C.A. Cupid could teach a class in helping people find love.Lucky for Hopper, she may have arrived just in time to help him find his Happily Ever After.

The first day of school from Raven Queen's point of view.

When Cupid is made Dexter's lab partner but sees that both he and Raven like each other she decides to tell them herself and make them lab partners.

Apple White may be the fairest of them all, but there are more than tiaras and tea parties in the typical day of this busy Royal.