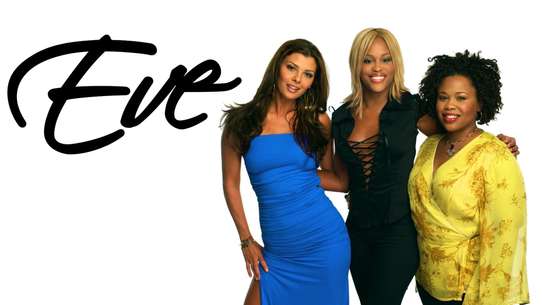 The BEST episodes of Eve

Every episode of Eve ever, ranked from best to worst by thousands of votes from fans of the show. The best episodes of Eve!

Eve is named for its star, rapper Eve, and is about a trio of women who have their own boutique & clothing line. The show follows their dating lives and those of their male friends. Michelle Penelope "Shelly" Williams, is trying to navigate the exhilarating world of 21st Century love, sex, romance and career; she has been a little too single, a little too long in her mind. Her two best friends, Rita and Janie, offer conflicting advice as Shelly tries to find her way on the rocky road to love. Their male friends include J.T., a handsome guy who enjoys being single, and his best pal, Nick, who is searching for the perfect woman who can meet his exact standards. Donovan Brink is the manager of Bedlam (one of Miami's hottest clubs), and friends with both Shelly and J.T., inevitably getting stuck in the middle when problems arise.

Shelley Williams meets J.T. and the two start to date as friends. But when Shelley has a feeling that J.T.'s not his type of man to be dating with, it comes down to it when Rita and Janie think that the two are a perfect couple and that Shelley should give him another chance.

The women at DivaStyle accidentally accept a client who turns out to be a pimp, Rodney P. When Shelly refuses to do business with him, Rodney calls in his lawyers, Sugar-Free and Comfort. Meanwhile, Rodney's colleagues take his ""discrimination"" fight to the streets by picketing outside the store.

When J.T.'s mother walks in on him and Shelly in bed, Shelly fears their romance will sour unless she can win his mother's acceptance and respect, and Rita breaks up with her ""perfect man"" when their sexual role-playing typecasts her as the submissive one.

Shelly's childhood friend, April, reappears in her life, and her party-crashing antics begin to influence Shelly's behavior, which causes friction between Shelly and her friends Rita and Janie. Meanwhile, Nick receives an email of a dancing stripper and tries to delete it before his boss can see it.

After drinking his apple juice, shattering his favorite beer mug and walking in on him shadowboxing naked, Nick tells Shelly that she has overstayed her welcome at their townhouse, placing J.T. in the middle of a showdown between his best friend and his girlfriend.

After spotting Janie helping Grant (guest star Sharif Atkins) shop for an engagement ring, a distraught J.T. turns to Rita and his parents for advice, which leads to a dramatic showdown between the two men at Shelly's birthday party. Meanwhile, wanting to avoid tearful goodbyes as he leaves for England, Donovan sneaks out of the party and mulls over his future plans in the cab to the airport with driver Rufus (guest star Ludacris).

#7 - Hair is Stronger Than Pride

Shelly convinces J.T. to visit her very popular hairstylist Coleman, but when J.T. voices his dissatisfaction with the haircut, Coleman bans both of them from his salon. Shelly begs J.T. to apologize. Meanwhile, when Nick flirts with beautiful delivery woman Danni, a jealous Rita attempts to prove to Nick that Danni may actually find Rita the more attractive package.

On Valentine's Day, the friends debate whether or not it was fate that Shelly and J.T. became acquainted. In a series of flashbacks to six months earlier, J.T. almost meets Shelly in line at a coffeehouse but becomes frustrated by her lengthy order. He also nearly encounters her at DivaStyle, but leaves after getting frightened by the sight of a wedding veil. Meanwhile, also in flashbacks, Shelly comes close to being seduced by handsome cheater Kevin Thorpe , with whom she had broken up. But at the last minute, she asserts her independence, leaves him and puts on the sexy dress to finally meet J.T.â€”and her destinyâ€”at Z Lounge.

J.T. is upset when Shelly discusses details of his bedroom antics with her gal pals, who disclose them to Missy Elliott (playing herself) in a nightclub during a celebration for Janie.

Shelly ponders whether she and J.T. are an item after seeing him with another woman at Rita's party; Nick's girlfriend (Carmen Electra) is wearing him out; Rita learns the truth about her financial state. Julio Iglesias Jr. has a cameo.

Shelly is on the verge of falling for J.T. and ending her celibate ways, but Janie's brief encounter with J.T. at the supermarket may change her plans.

Shelley breaks the ""no dates"" rule and invites her new boyfriend to the New Year's Eve party, and everyone swaps stories about past dates. Everyone discusses their worst New Year's Eve dates ever! Whoever had the worse one got an entire bottle of champagne. Rita's date: died on New Year's Eve of a heart attack after she showed herself nude to him. Nick's date: a ventriloquist dummie. JT's date: believed that she was ""Wonder Woman"" Janie & Marty's first New Year's Eve in their new house was ruined by the surprise visit by Marty's mother. Donovan's date hooked up with an old boyfriend during her date with Donovan. Shelley found out that Mark was once gay and proposed to his ex-boyfriend on the top of a mountain.

DivaStyle finds itself in a publicity nightmare when fashion commentator Robert Verdi slams one of its dresses, worn by Brooke Burke to a televised awards show.

When Shelley starts wearing fake breasts, men begin to give her special treatment. She later considers getting breast implants.

J.T.'s old flame comes to town so Shelly feels she must up her game in order to keep her man from being tempted away.

In an attempt to mend their rocky relationship, J.T. and Shelly sit down for an honest conversation about the effort and compromises each must make if they're going to stay together, but just when she thinks they're making progress, Shelly is shocked to learn that J.T.'s idea of compromise involves her changing her lifestyle. Meanwhile, Nick tries to pretend that he is happy about Donovan's romantic interest in Rita after learning of their newfound mutual attraction.

After catching Shelly rifling through his wallet, a skeptical J.T. does some background checking of his own; Nick opts to get a tattoo. Rappers DMX and Bizarre have cameos.

A severe storm makes the gang confront issues concerning greed and faith: Shelly squabbles with Janie over her lottery winnings, while Nick has a religious experience.

When Coleman's (guest star Phil LaMarr) hair salon gets shut down, Shelly and the girls help set him up in their shop temporarily, but they soon regret the decision when the demanding stylist takes over DivaStyle. Meanwhile, the gang learns some surprising information about Donovan after an immigration raid on Z Lounge.

When Shelly and Rita's stepmother (Jodi Lyn O'Keefe) fight, it is up to Shelly to swallow her pride and apologize.

Shelly pretends to be disabled when a potential buyer in a wheelchair (Daryl ``Chill'' Mitchell) catches her using a handicapped parking spot.

Shelly and Rita take a martial arts class, but a rivalry ensues when Rita proves to be more adept. Meanwhile, Donovan begins dating Rebecca (guest star Tayna Roberts), a dynamic older woman, but trouble arises when he attempts to set J.T. and Nick up with her friends.

Shelly and J. T. â€˜dip back' and break Nick's pool table in the process. J. T. tries to make Nick believe he broke it. Janie and Rita express their concern to Shelly when she â€˜double dips back' with J. T. Donavan asks Rita on a date that turns into a disaster.