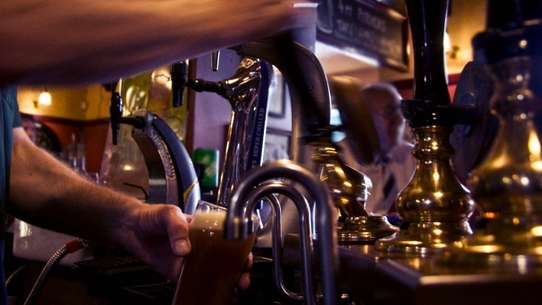 The BEST episodes of Early Doors

Every episode of Early Doors ever, ranked from best to worst by thousands of votes from fans of the show. The best episodes of Early Doors!

Early Doors is set in a small pub in Manchester where daily life is bound up in the issues of love, loneliness, and blocked urinals. Regular drinkers Joe and Duffy pass the time with landlord Ken and his police officer cronies.

It's Melanie's 21st birthday party and 'Jumping Joe's Krazy Roadshow' is in full swing. Phil and Nige take the opportunity to try out their new business venture and Tommy eagerly eyes up the buffet.

The excitement never stops in The Grapes, with the drawing of the football card. The Police are keeping busy, with drug raids, helicopter rides and free electric on the agenda. Jean prays for good health and a Peak Practice video, while tales of Joan's Mum put Tommy off his beer. Duffy and Joe give Liam love advice, will he take it or will he take the honest approach?

In the penultimate episode of life at The Grapes Ken the landlord smartens himself up to play the romantic lead. There is growing concern amongst the regulars that their favourite boozer may be turned into a fun pub and Duffy plays down his recent good fortune.

The future of The Grapes is uncertain as Ken the landlord is ready to throw the towel in. Tanya however has different plans for him and romance is high on her agenda. A police informant spurs Phil and Nige into some drastic action.

Ken the landlord is laid up with the flu. The cops arrive to celebrate their successful drugs bust. Duffy is in no mood for celebrating and faces up to the prospect of single life, seeking solace in the bottom of his beer glass.

Good news for Melanie hurts Ken. Meanwhile, Phil and Nige own up to an error, Eddie and Joan are all dressed up for their anniversary and Jean's Maltesers are missing. Joe keeps a secret, is Duffy in for a taste of his own medicine?

Women throw themselves at Ken in The Grapes. Liam's cooking Melanie a meal for her birthday, although Joe and Duffy suspect she's got a bigger treat in store, Phil and Nige find a bonus in Comet and Duffy's playing away from home. Meanwhile, Joe's sleeping in the spare room after a "wardrobe incident".

Discarded fag ends in the urinals and the arrival of temporary traffic lights in the vicinity causes chaos in The Grapes.

Ken is forced to downsize the transport for the Big Boy's Beano, they'll be going in a taxi soon. Phil and Nige stare death in the face, Melanie finds her real father and Liam gets a lesson in music and romance from Joe and Duffy. It won't stop him getting on the wrong side of Melanie. Has Jean managed to talk herself out of a holiday?

It's the big day in The Grapes. The boys prepare for the Big Boys Beano with a hearty breakfast, while Melanie meets her real Dad. Back at The Grapes, Ken discovers who's been blocking the urinals!

Forged bank notes are being past over The Grapes counter but who is the culprit? Luckily Phil and Nige the policemen are on the case.

It's Quiz Night down at The Grapes and Eddie reveals his specialist subject. Tanya lays on her charms for Ken and he lays on some sandwiches for the regulars. The Quizmasters word is final.