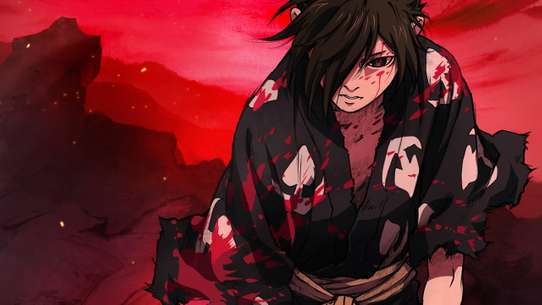 A samurai lord has bartered away his newborn son's organs to twelve demons in exchange for dominance on the battlefield. Yet, the abandoned infant survives thanks to a medicine man who equips him with primitive prosthetics—lethal ones with which the wronged son will use to hunt down the multitude of demons to reclaim his body one piece at a time, before confronting his father. On his journeys the young hero encounters an orphan who claims to be the greatest thief in Japan.

Hyakkimaru has regained his voice from the devil god, but one leg was stolen from him. After returning to the deserted temple and having his wounds taken care of, he again goes into battle with the demon. Meanwhile, in the abandoned temple where Mio and the children are waiting ...

Kagemitsu, who offered up his own son to the demons. Hyakkimaru, who is trying to get back the body parts that were taken from him. As if drawn together by fate, they face each other.

#3 - The story of the mercilessness

Dororo comes down with a high fever. While woozy from its effects, the youngster catches a glimpse of some red spider lilies, which stirs up memories of past days spent with parents Hibukuro and Ojiya.

Hyakkimaru comes face to face with Tahomaru, Mutsu and Hyogo, who have been possessed by the power of demons. Dororo, Lady Nui and Biwamaru hurry to the scene, where they witness a ferocious battle that will determine the future of the land of Daigo.

Daigo's castle is engulfed in flames. Within, two brothers by blood are at the mercy of fate. Dororo, Jukai and Lady Nui also head for the castle, each with their own thoughts weighing down upon their hearts. For a life that began with a silenced cry, where will the path of destiny lead?

Inside Daigo's castle, Lady Nui appears before the cell in which Dororo has been imprisoned. Meanwhile, Hyakkimaru is also approaching the castle as he tries to take back both his body and Dororo. Behind Hyakkimaru stands Midoro, who has transformed into a ghoul.

#7 - The story of breaking the cycle of suffering

Daigo Kagemitsu continues to prepare for war with the neighboring land of Asakura. Upon receiving word that Hyakkimaru is approaching his domain, Kagemitsu sends Tahomaru to dispose of him.

Jukai is a doctor who travels the land fitting prosthetic arms and legs to those who have lost their limbs in war. One day, on the riverbank he finds a baby missing most of its body parts. He decides to raise the child, who he names “Hyakkimaru”. Jukai provides the child with prostheses, but the time comes when Hyakkimaru sets out on a journey to recover his own body parts.

Struggling to adapt to an unfamiliar world of "sound", Hyakkimaru is injured in a fight with a ghoul. He is taken in and nursed by a girl named Mio, who looks after children orphaned by war. However, after becoming aware of a demon nearby, Hyakkimaru heads out to fight it before he is fully recovered.

#10 - The story of the Jorogumo silk spider

The spider-like ghoul Jorogumo is wounded by Hyakkimaru. To heal itself, it transforms into a woman and takes advantage of the hospitality of a young man named Yajiro. Having let Jorogumo slip through their fingers, Dororo and Hyakkimaru stop at a village where they hear rumors of a kidnapper at large.

After entering Lord Daigo's domain, Dororo and Hyakkimaru hear tales of Banmon, the huge wall that is the last remnant of a fort that once stood on the border. Hyakkimaru squares off against the fox demon that haunts the wall.

A village within Daigo's domain is being terrorized by a ghoul that dwells in a nearby lake. Tahomaru, accompanied by his aides Hyogo and Mutsu, volunteers to exterminate the ghoul.

#13 - The story of questions and answers

Jukai is reunited with a bloodied Hyakkimaru at the site of a recent battle, and finds out the truth of how Hyakkimaru and the demons are connected. Hyakkimaru asks Jukai for a new prosthetic leg, but...

Dororo and Hyakkimaru happen upon a village and are brought before its chief, Lady Bandai. However, Hyakkimaru inexplicably draws his sword in her presence, resulting in both him and Dororo being locked in a storehouse by the villagers. It turns out they are not the only ones confined there...

Dororo and Hyakkimaru come face to face with Tanosuke the Slaughterer, who wields a cursed sword in which a demon dwells. Hyakkimaru narrowly manages to repel Tanosuke, but the demon blade falls into Dororo’s hands and begins to take control of him.

#16 - The story of the cape of impermanence

The shark demon lets out a roar and attacks Dororo, who is tied up and unable to move. Meanwhile, a troop of soldiers commanded by Tahomaru is also approaching the cape.

While traveling along a mountain path in search of a demon, Dororo and Hyakkimaru encounter a young man named Dice-spot Saburota. The man says that he too is hunting the demon, and they set off to exterminate it together.

In Japan's Warring States period, Lord Daigo Kagemitsu makes a pact with 12 demons, offering them his unborn son in exchange for the prosperity of his lands. Years later, young thief Dororo is attacked by a ghoul but rescued by a mysterious boy, whose body parts turn out to be almost entirely prosthetic.

At a certain village, young girls are offered up as ritual sacrifices to appease a giant centipede demon that appears shrouded in black clouds. Hyakkimaru and Dororo team up with Saru, a boy whose older sister has been offered as a sacrifice, and together they confront the demon.

#20 - The story of the Blank-faced Buddha

Having left Daigo's domain, Dororo finds a statue of Fudo, one of the wisdom gods. But the statue is actually a demon that is harvesting humans' faces in an attempt to find one for itself.

Dororo has been captured by Itachi and is being taken to the cape where Hibukuro supposedly hid the money. As Itachi and his men look for boats to get across to the cape, they are approached by a one-armed boy named Shiranui.

To fix Hyakkimaru's broken sword, he and Dororo travel to a village where a master swordmaker named Munetsuna lives. Upon arriving at Munetsuna's house, they are met by his daughter Okowa.

Sabame has been feeding people to the demons to protect the village over which he rules. As Hyakkimaru once again confronts the demon moths, Dororo gets trapped in a storehouse.