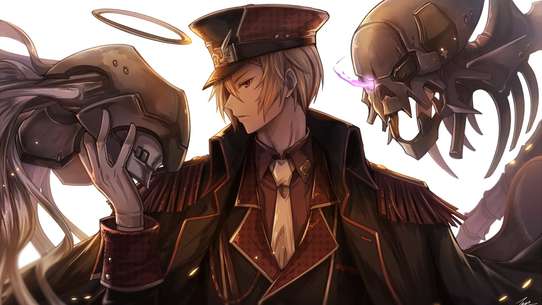 The BEST episodes of Divine Gate

Every episode of Divine Gate ever, ranked from best to worst by thousands of votes from fans of the show. The best episodes of Divine Gate!

When the Divine Gate opened, the living world, the heavens, and the underworld became connected, ushering an era of chaos where desires and conflict intersect. To restore order, the World Council is formed. As peace is restored, the Divine Gate becomes an urban legend. In that world, boys and girls deemed fit by the World Council are gathered. They are ones who aim to reach the gate for their personal objectives. Those who reach the gate can remake the world. What lies beyond the gate? When they reach the door, will the world change? Will it be the past that changes, or will it be the future?

Akane, Midori, and Aoto are separated from their advisers and magically find themselves acting in a play, conspired by Loki and Shakespeare. As they are forced to play their part, they each meet someone who they've been looking for...

Concerned about Aoto's emotional disconnect, Akane and Midori look him up on the academy server, but his information were classified. Determined, the two steal Undine's access pass and finds out that Aoto is a suspect of the Blue Christmas massacre.

With "despair" being the key to the Divine Gate, both Akane and Midori's loss of their significant person tragically gives them access to the Gate as well. However, Aoto is up for more despair as he faces his twin brother, Ariton.

After escaping Shakespeare's divine play, Akane, Midori, and Aoto find themselves inside the zone. Aoto already holds the key to the Gate, but Akane and Midori do not. Unfortunately, Loki already has that figured out, and great tragedy awaits the two.

For Akane, his father meant the world, so he cannot understand why Aoto would kill his own parents. However, Aoto does not share his story either. The colliding two run into each other later, when a patrol Driver suddenly starts to malfunction.

Lead by Arthur, the Knights of Round and the Adapters from the Academy head for the Divine Gate. Arthur explains that his wish is to destroy the Gate and return the world to its original state. However, Loki and Oz stand in their way to stop them.

Akane and the team go to an abandoned section for special training. During the latter part of their training, they meet a group called "The Defiers." Hybrid of human and animals, they have super strengths, and begins attacking Akane and the team.

Akane and the team were able to escape the collapsing Divine Gate, but Arthur has gone missing and the World Council has imposed a martial law to find everyone. Meanwhile, Loki joins the Geniuses of Divine and has something else up his sleeve.

The memory of her and her friend is the reason why Midori pursues the Divine Gate. When Arthur announced that they will start the search of the Divine Gate, Midori has mixed feelings; She wants to find the answer to her question, but she is also afraid.

On one rainy day, an Adapter attacks the passengers on a tram. Luckily, Aoto, another Adapter who was at the scene, stops him with his ability. Akane and Midori are ordered by the Academy to recruit Aoto, but they hear a disturbing rumor about him.

#11 - More Important Than Yourself

Arthur finally decides to go find the Divine Gate. He asks the members of the Knights of Rounds as well as the select few from the Academy to join him on this expedition. However, Loki and Oz set out on their own mission as well in response.

Led by the spirit of the key, Akane, Midori, and Aoto reaches the front of the Gate. There, the Key gives them the option to choose their own fate. However, they quickly learn that the Divine Gate is much more than just something that grants wishes...