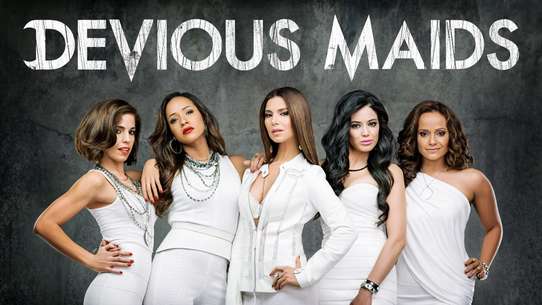 The BEST episodes of Devious Maids

The series centers on four Latina maids working in the homes of Beverly Hills’ wealthiest and most powerful families, and a newcomer who made it personal after a maid was murdered and determined to uncover the truth behind her demise, and in the process become an ally in their lives.

The maids put their own lives at risk and unmask a killer.

The mystery surrounding Flora's death comes to a head.

Nicholas reveals a shocking secret while in a pill-induced haze. Rosie wants to save Kenneth. Zoila forces Genevieve to face her mother. Valentina asks Remi to help Ethan. Spence gets some bad news.

When Nick finally admits his secret to Marisol, she convinces him to make things right with all those involved. Carmen meets a handsome stranger who offers to help her with her music career. As Zoila waivers between Pablo and Javier, she gets some shocking news. Valentina is offered the opportunity of a lifetime. Spence and Rosie decide to tie the knot.

Carmen feels threatened by an old flame from Alejandro’s past and goes to great lengths to insure that her career isn’t in jeopardy; Zoila helps Valentina with her job but ignores problems at home; Rosie begins a new job with a dysfunctional family; Marisol tries to make peace with Opal; Peri threatens Spence so he will stay in their marriage; Adrian copes with a home invasion but fails to protect Evelyn in a dangerous situation.

Marisol discovers some shocking news about her fiancé Nicholas and Opal. Dissatisfied with the doctor that Didi’s provided for Kenneth, Rosie takes Kenneth to a specialist who provides them newfound hope. Carmen prepares for her performance debut in front of industry bigwigs, but when reality hits she struggles to perform. Genevieve tries to show her support by inviting Zoila to a luncheon. Increasingly wary of Adrian’s behavior, Evelyn finds comfort elsewhere. Valentina struggles to get over Remi.

Marisol discovers more secrets about Opal. Rosie attempts to help Lucinda, which only leads to further strife within the Miller family. Carmen prepares for a performance. Zoila tries to move on from her husband and goes on a date. Genevieve interferes with Valentina and Ethan’s relationship.

Reggie moves forward with his plans to tear apart the Miller household. Genevieve is surprised when her estranged mother shows up at her door. Marisol deals with a gossipy new hire at the Deering mansion. Ty's obsession with Carmen takes a violent turn. Adrian begins to suspect that Tony may not be who he claims to be.

Nicholas is jealous over Marisol’s growing friendship with her book editor. Lucinda crosses the line with Rosie. A new visitor creates problems for Carmen. Tony makes a decision that doesn’t sit well with Evelyn. Things get complicated for Valentina and Ethan.

Marisol is at risk of blowing her cover when an ex-student recognizes her in front of Rosie. Valentina discovers the cause of Remi's mood swings and reluctantly turns to Zoila for help. Carmen and Sam have some disagreements about their relationship.

When Marisol confronts Opal about Nicholas' accident and threatens to turn her into the police, things take a violent turn. Valentina finds herself in trouble, bringing Zoila and Pablo together to help her. Rosie continues to investigate her suspicions about Reggie. Carmen attempts to help Spence when his drinking starts affecting his job. Adrian learns the truth about Tony.

Marisol convinces Nicholas to get rid of Opal; Reggie grows jealous when he learns of Rosie’s history with Spence; Carmen tries to let Ty down easy; Zoila gets closer to Javier; Adrian is suspicious of the relationship between Evelyn and Tony.

Rosie makes a big decision after Spence starts asking questions about Ernesto's behavior; Zoila learns a disturbing truth about Dr. Neff and tries to warn Genevieve; Jesse clashes with Marisol over her suspicions about Olivia; Evelyn puts Carmen in charge of disciplining her foster son.

Marisol puts herself in harm's way as she digs deeper into Flora's murder. Peri goes through great lengths to get Rosie to forgive her. Carmen rekindles her relationship with Sam after seeing how lonely Alejandro is, despite his fame. Zoila continues to disapprove of Genevieve and Phillipe's relationship. Remi makes a major decision, putting Valentina in a difficult position.

After the shooting at Rosie and Spence's wedding, lives are changed forever.

Marisol believes Nicholas could be hiding something from her. Genevieve wants Zoila to bring a date with her to try and make Pablo jealous. Evelyn wants Adrian out of the house to spend some time with Tony. Carmen and Rosie fall out over Carmen's new job. Valentina and Ethan's relationship develops. Genevieve hears something shocking about Remi.

Marisol finds a new love; Peri goes to great lengths to keep Spence and Rosie apart; Zoila discovers that Valentina is back from Africa; Carmen and Alejandro settle in to their fake relationship; Odessa reaches her limit; Adrian and Evelyn hire a handsome bodyguard.

Zoila discovers a huge secret that finally helps Rosie get to the truth about Peri’s murder. Carmen and Danni find themselves in a dangerous situation. Genevieve makes a new friend and Marisol attempts to get closure with Peter. Adrian has big news to share, bringing Evelyn one step closer to finalizing the divorce she’s always wanted

Zoila's job is jeopardized when Genevieve has financial troubles; Marisol makes a discovery at the Powell house; Carmen is jealous when Sam starts dating; Valentina worries about Remi's erratic behavior.

Evelyn blackmails Rosie so she can spend more time with baby Tucker. Zoila is upset when Genevieve presents her with an interesting proposition for Valentina. Marisol discovers some new information about Flora and grows suspicious of Michael. Carmen is troubled by Alejandro's reaction to Odessa's illness.

Marisol struggles with Jesse being both her boyfriend and her employee. Zoila concocts a scheme to get her annoying sister to end her visit. Evelyn pursues her dream of adopting a child. Carmen’s singing career finally gains traction. Rosie is suspicious of the Stappord’s story about Katy.

When Nick refuses to divulge his secret past, Marisol sets off on a quest to find out the truth. Zoila struggles with her feelings for Javier and Pablo. Carmen must play babysitter to Spence's son. Rosie recruits Lucinda and Didi to work together to rescue Kenneth and put a stop to Reggie's financial thievery. Valentina tells the police what she knows about Ethan and his crew.

Rosie deals with having Ernesto back in her life; Genevieve makes a heartfelt offer to Zoila.

Lives are changed forever following the explosion at the Powell mansion.

Nicholas asks Marisol a surprising question. Opal turns to Ethan for help. Genevieve invites Zoila and Javier over for dinner. Valentina gets caught in the crossfire of Evelyn and Adrian trying to outsmart each other. Carmen and Spence deal with Ty misbehaving. Lucinda and Rosie argue about her behavior.