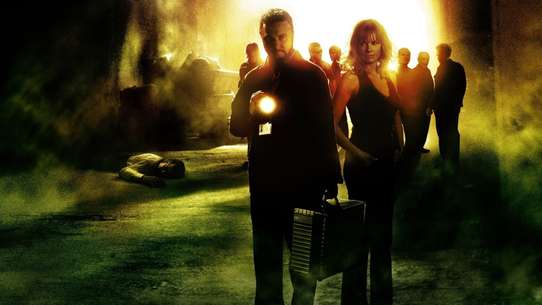 CSI is a crime drama in which the characters use cutting-edge forensic tools to examine the evidence to solve the case. Rather than asking 'whodunnit' (investigating witnesses/suspects), CSI explores the 'howdunnit'.

The CSI teams come together to save one of their own when they learn one team member has been kidnapped and buried alive, and now they must find him before he suffocates under five feet of dirt.

The CSI teams come together to save one of their own when they learn one team member has been kidnapped and buried alive, and now they must find him before he suffocates under five feet of dirt.

The team meets a blast from the past, with a chance to solve a cold case that has haunted the team for 14 years.

Catherine's friend Laura's mogul husband Mark has a lot to hide behind his successful international corporation, and he's hired a crack team of assassins to carry out the murders of anyone who might be aware of what he's doing, and that includes Laura's lawyer and Laura herself.

The CSI team says goodbye to Catherine Willows as she makes a life-changing decision.

A spa weekend for Sara, Finlay, and Morgan turns into a murder investigation and missing persons case when Finlay disappears, as the CSI team must piece together what happened in detail to find her.

The investigation of a triple homicide leads to the discovery of corruption running rampant throughout the LVPD. The closer they get to the truth, the more serious are the repercussions.

D.B. Russell leads the CSI team on a hunt to find Morgan and Ellie Brass following their kidnapping by a ritualistic killer.

#9 - The Accused Is Entitled

Grissom and the team investigate the death of a young woman found in the hotel room of a popular actor.

Langston becomes more determined than ever to track down Nate Haskell after discovering that he's kidnapped his ex-wife, Gloria.

After years of pursuit and a countless number of murders, Langston comes face-to-face with serial killer Nate Haskell inside the house where his killing spree began.

All hell is breaking loose in the aftermath of the shooting of Eckley, the kidnapping of Russell's granddaughter, and Stokes quitting. Fin seems to have disappeared, causing the CSIs to be short-handed and struggling to keep up. Given the personal nature of the case, Russell becomes heavy-handed and reckless in his effort to dig up fresh leads.

The Cadillac of an infamous 1970’s mob boss turns up in a lake, even though he disappeared years ago. A photo of current murder victims also turns up in the car, so the team must determine whether this current murder spree is related to the missing gangster.

Catherine revisits one of the very first cases she worked as a CSI when the convicted felon in the murder claims the verdict was based on faulty evidence.

The CSI team is called in to investigate the stabbing of a couple found at a local motel that is reminiscent of two incidents that occurred in the same room.

When a student is arrested and tried for the murder of a popular high-school girl, the suspect's 12-year-old sister confesses to the crime. This results in the judge giving the prosecution 72 hours to re-examine the evidence before the jury delivers its verdict.

After Warrick is shot in a Las Vegas alley, the CSI team comes together to deal with the aftermath.

As Russell and his team investigate a series of murders with disturbing similarities to the sins in "Dante's Inferno", one of their own confronts peril on a dangerous undercover mission to get close to the killer.

When a teenager and her sister are the sole survivors of the gruesome murder of four members of one family, Grissom and his entire team investigate the crime. What initially looks like a bizarre cult murder becomes more disturbing when they discover the motive behind the massacre.

Grissom investigates the murder of an aging rockstar who is found dead in his kitchen with an exact replica of the crime scene on the counter next to him. Catherine probes her own abduction and learns that someone may be targeting her family.

The CSIs investigate the murder of a rock and roll groupie and the disappearance of a prostitute that both have ties to a mysterious band.

Russell seeks advice from a former colleague during an investigation into the death of a man's ex-girlfriend.

Catherine comforts Warrick when he is accused of murdering a famous Vegas gangster and even he is uncertain of his guilt or innocence.

The CSI unit investigates when Frank, an apparent murder victim, sits up and needs help but is he just another victim?

Finlay must deal with a bomb planted in her car. Russell gets a call from someone claiming to be the Gig Harbor killer.