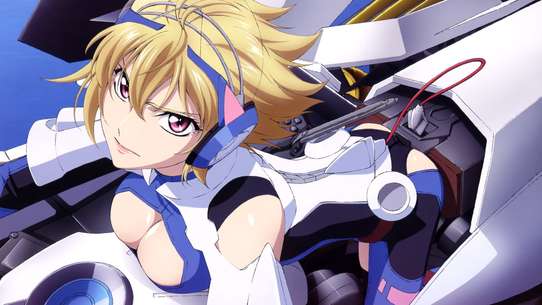 The BEST episodes of Cross Ange: Rondo of Angel and Dragon

The royal life of Princess Angelise Ikaruga Misurugi was as idyllic as the life of a sixteen-year-old princess could be. Beautiful, talented, athletic, loved by her people, and soon to be baptized in honor of her ascension to the throne of the Misurugi Empire, Angelise had everything. Even her kingdom was in a blissful age of peace and prosperity thanks to the utilization of an extremely advanced technology materialization force known as "mana." However, everything Angelise has come to know soon crashes to the ground around her after she is revealed to be a "norma," a member of society resistant to the effects of mana and unable to use it herself. Just like the rest of the norma, Angelise is arrested and removed from society. Now she's being forced to work as a soldier based out of the prison camp, Arzenal, and fly a transforming robotic vehicle called a "Paramail." To survive, Angelise will have to adapt to several different aspects of her new life: coping with prison society, relationships with other "norma" women, and piloting her Paramail against giant beasts known as DRAGONs.

Ange reunites with the rest of her comrades as they prepare to head into their final battle against Embryo and complete Operation Libertus.

Ange's brother, Julio, attacks Arzenal with his own fleet. With no other option, Jill commences Operation Libertus as Ange and the remaining pilots prepare to fight back.

Salia helps Ange escape from Embryo’s clutches. But Ange’s escape becomes short-lived as Embryo continues to hunt her and Momoka down. Just when it seems like they’re cornered, Tusk arrives on the scene to face off with Embryo.

When Embryo’s attempt to seduce Ange fails, he soon reveals his true character along with his diabolical plans for Aura and the two worlds. Meanwhile, Jill’s descent troubles Hilda and the remaining Arzenal fighters.

Despite returning to Arzenal and reuniting with her old comrades, Ange soon finds herself at odds with Jill, whose devotion to completing Libertus has grown into a dangerous obsession.

Three foreign Para-Mails appear and attack Arzenal with a fleet of DRAGONs. But when Ange engages the enemy head-on she discovers a shocking truth.

The inhabitants of Arzenal attempt to recover from the attack by the mysterious Para-Mails. When a DRAGON survivor is discovered in the base, the pilots learn that not everything is as it appears.

Ange is captured by Salia, Ersha, and Chris, who have all been swayed to Embryo’s side. When Ange finds herself face-to-face with Embryo once again, he reveals the truth behind his own existence and that of Ange’s very world.

Embryo continues with his plans to combine the two worlds and, using Aura’s power, create an entirely new world. Ersha has a change of heart, and Salia’s jealousy of Ange grows. Meanwhile, Ange mourns those she has lost.

Ange finally reaches a decision and chooses to return to Arzenal. The invasion begins, but takes an unexpected turn when their plans are thwarted by Embryo's scheming.

The fight is on, and soon Ange and company find themselves locked in a battle to the death with their former teammates as the world continues to collide.

With Ange kidnapped by Embryo, it’s now up to Tusk, Hilda, and Salia to unlock the power of the Vilkiss and save her before she is lost forever.

Ange awakens to find that she, Tusk, and Vivian have been transported to an alternate dimension. As they work to learn more about this unknown world, Ange and Tusk begin to grow closer together.

#14 - Goodbye From the Gallows

Despite returning to their homes, both Ange and Hilda are met with betrayal and must face the cruel realities concerning the ones they once cared for.

After an encounter with two mysterious women riding DRAGONs, Ange, Tusk, and Vivian are taken to a strange castle where they once again cross paths with the pilot of one of the mysterious Para-Mails, Salamandinay.

Ange awakens after her crash landing to find herself in a very compromising position with a mysterious boy. With the Vilkiss damaged, Ange will have to rely on this stranger and his suspicious familiarity with para-mail if she wants to leave.

With the tragic events of the previous battle fresh on her mind, Ange chooses to become the pilot of the powerful para-mail, Vilkiss in order to find death on the battlefield.

After escaping Arzenal, Ange, Momoka, and Hilda go their separate ways. While Ange and Momoka head to the imperial palace to aide Sylvia, Hilda returns to her hometown in search of her mother.

The Arzenal Normas are given the day off to participate in the annual Festa celebration. However, all Ange can think of is the mysterious message she received from her younger sister, Sylvia.

Ange’s rogue tactics continue to put her at odds with her teammates, especially their squad captain, Salia. But when a new DRAGON appears, Ange will have to learn to follow orders if she and the others hope to survive.

Although Ange has finally accepted the reality of her life, tensions between her and the other Norma at the Arzenal facility come to a head as a fellow pilot’s revenge results in dire consequences.

Just when Ange thought she had finally put her past behind her, Momoka, her former maid, appears in search of the beloved princess that she once knew.

After being exiled to the island of Arzenal, Angelise clashes with her fellow Norma over her refusal to accept the truth. But when the girls are thrown into battle, reality will strike in the most brutal way imaginable!

Princess Angelise of the Misurugi Empire lives a life of privilege in a world where users of an advanced magic known as “Mana” rule. But her world is shattered when she discovers that she is in fact a Norma - an outcast who cannot use Mana!

Salamandinay and her troops begin making preparations to invade Ange's world and take down Embryo once and for all. Now Ange must decide if she will stand and fight at Salamandinay's side.