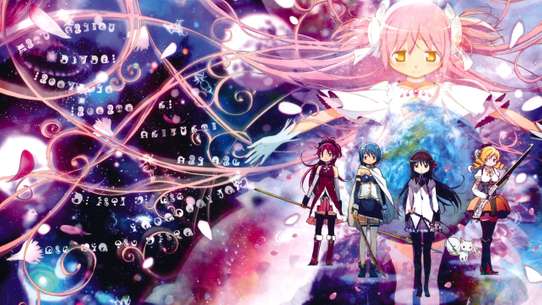 There exist familiars who have the power to grant one wish to a chosen girl. However, that girl must then become a Puella Magi, a girl with magical powers, and fight against witches, evil creatures born from curses that are responsible for murders and suicides. A schoolgirl named Madoka Kaname and her friend Sayaka Miki are approached by a familiar named Kyubey and Puella Magi named Mami Tomoe with offers of becoming magical girls. Another Puella Magi named Homura Akemi tries to prevent Madoka from making such a deal.

The timid new girl is so nervous and withered. She introduces herself shyly while feeling the eyes of all students in the class.

Madoka appears in front of Homura, full of determination -- and she declares to Homura, "I found my wish." But what will be her decision?

#3 - I'm Not Afraid of Anything Anymore

Madoka and Sayaka are getting used to Mami's witch hunting trial run, yet their wishes remain undecided. Mami reveals her past to the two girls.

Thanks to healing magic, Sayaka can fight without a scratch. But she seems extremely exhausted. On the way home, Madoka comments on Sayaka's fighting.

Homura intervenes in the battle between Sayaka and Kyoko. The next day, Sayaka and Madoka search for traces of the familiar that slipped away.

Kyubey appears in front of Madoka, who is consumed by grief. Not understanding her emotions, he tells the history of the human race and of his kind.

#7 - Miracles and Magic Are Real

After the fierce battle they witnessed, Madoka and Sayaka now fully realize the demands of being involved in the magical world.

Now that Sayaka's wish came true by making a contract with Kyubey, her mind is clear and she doesn't seem to regret becoming a magical girl.

#9 - Can You Face Your True Feelings?

Sayaka, in low spirits, wavers between the wish that came true by accepting the destiny to fight and the high price she paid for it.

A Grief Seed hatches, and a new witch emerges. With Homura's help, Kyoko is able to escape the witch's labyrinth while carrying Sayaka.

#11 - That Would Be Truly Wonderful

Madoka and Sayaka find themselves in a desperate situation and are rescued by Mami Tomoe, a magical girl. Afterward, Mami invites them to her house.

Eighth-grader Madoka experiences an odd dream and goes to school the next day, only to learn there's a new girl in her class -- a girl from her dream.