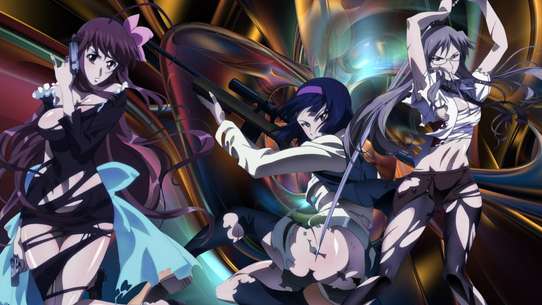 The BEST episodes of Corpse Princess

Shikabane - the living dead who continue even after they die because of strong attachment or obsession. They attack people and kill them. Shikabane Hime are girls created to hunt Shikabane. A boy, Kagami Ohri, was adopted by Tagami Keisei, a Buddhist priest of Kongon Clan, when he was a child, and was raised in an asylum. One night, he encounters a beautiful girl at the temple who works for the chief priest. She is Hoshimura Makina, a Shikabane Hime, who hunts Shikabane under the orders of Kakusei.

The true agenda of the Seven Stars and the Traitor Monks is revealed as the Catastrophe of the city creates Numerous Shikabane and The Corpse Princesses Fight the hordes. Only to collapse when their Contract bond is broken as Hokuto destroys a mysterious Casket.

Keisei is later wounded more heavily and dies after shifting his contract with Makina to Ouri. Makina manages to defeat Shichisei Kowaku whilst fighting with Ouri.

#3 - One Hundred and Eight Lies

Inuhiko[?], Ouri's classmate smacks Kasuga in hopes of getting her back to normal, but Kagusa escapes and Inuhiko tells Ouri that Kasuga loves him. Makina hears of the incidents at school and runs there, and meets Kasuga who manages to trap Makina with the balloon curse and runs away. Ouri catches up with Kasuga who is about to get eaten by her "happiness". Makina defeats a shichisei but is knocked unconscious by another. Ouri makes an attempt to destroy the happiness monster with a Zadan Jutsu but fails. It is revealed that Ouri is believed to be the child of a corpse.

Ouri learns of his mother being a corpse and more of his past. The Kougon Sect regroups as the Seven Stars commence the final action of their plan as Planes all over the city crash into buildings creating Countless Shikabane.

As the battle between Hokuto and Makina Continues it is revealed that Corpse Princess' Choose to Bond with their Monks and all the Princess' regain their power. Another of The Seven Stars is defeated and one gives up. The last Seven Stars escapes with Hokuto. Makina and Ouri decide to make a final decision on their Future.

Itsuki fights a corpse and Ouri is shown a side of the shikabane hime he doesn't know. Rumours are heard that Keisei's body has turned into a corpse, and Sadahiro is sent to destroy it. Later on, Makina meets with "Keisei's corpse" but it turns out that it was the shichisei Ena. Ouri and Makina meet with Sadahiro and his shikabane hime in the forest; they all face the body controlling shichisei.

Ouri and Makina fight Ena, one of the Shichisei. Ouri is shown to have a bit of Zadan Jutsu power, having entered the Kougonshuu. Meanwhile, Kagusa gets controlled by Touya, the "balloon monster" shichisei. Ouri and Makina confirm their contract but afterwards, the controlled Kasuga goes into Ouri's apartment and pushes him down onto the floor.

Kasuga Nozomi dies completely because she did not fulfill the requirements needed to become a shikabane hime. Only girls of a certain age group and under special circumstances can become Shikabane Hime. Makina wakes up in the Shichisei Headquarters and fights Hokuto excitedly. The shichisei reveals some plans and the kougonshuu reveals to Ouri that they believe that he is the child of a corpse. He loses control when he remembers his childhood, and the high priest Gon kicks him out of kougonshuu to relieve him of his job as a contractor priest. A small scuffle over Ouri's priest friends allows him to escape back to the orphanage. One of the shichisei, Huzuchi, is revealed to be killed by Ouri's "mother" and has a grudge against Ouri for being the only one left alive.

The Kougan discover from surveillance videos that Hokuto is in the area. Aragami-san gives the intel to Keisei, upon which Makina shivers trying to keep her excitement and anger under control. Ouri is back at the orphanage for the time being since he is out of work. Keisei tells Ouri about how in his past, he was raised by Makina's father, and why he made the pact to be a contracted priest. The Shichisei Hokuto, Ena-san makes his move and targets Ouri by possessing him. The Buddhist Corpse of Shikusei Kowaku and the Traitor Asaka attacks Keisei and Makina at the temple grounds. Asaka escapes and Keisei pursues. While checking on the safety of the orphans, Keisei is stabbed by the possessed Ouri.

A bit of history about Itsuki and "Genpaku" Takamasa's early days as a team. Genpaku has to face a friend from four years ago, one that he could not kill back then.

Makina is dispatched to assassinate Kun Osaki, a J-pop singer who became a Corpse after refusing to accept her death because of her wish to continue singing. Armed yakuzas are, however, instrumental in fending off the first attempt when an unknown monk warns Osaki's manager. Keisei gives Makina a hand in killing Osaki.

A priest wants Makina to be killed. Makina is currently imprisoned and spirits are eating her rune. Ouri undergoes priest training but gets cut off because of an incident at Makina's prison.

After several children killed in a highway accident come back to life as corpses, Makina is dispatched to kill them. However, Ouri Kagami gets in the way when one of them pleads to him to help her escape. Keisei and a band of anti-corpse monks assist Makina to take down the child corpses.

Makina saves a bunch of students from a Corpse, specifically Kasuka (nicknamed Omune-sama), a girl who later becomes infatuated with Makina's beauty of death. Later, Ouri investigates what happened to Minai from Makina with no success. Curious about Ouri's insensitivity towards death, Makina approaches Keisei asking why he is so compassionate towards the Shikabane. Keisei shows us a flashback of Ouri's first appearance at the orphanage, where we see an emotionless 3 year old Ouri. He had been detached from the world until he rescued a kitten crying by the riverbed. In a tragic twist, that cat died shortly after from a car accident. Ouri, affected by this incident, is aware of death constantly. Kasuka visits Makina bad mouthing Ouri, suggesting he would never know Makina like she does. Makina defends him by stating he knows more about her (death) than Kasuka ever will.

The shichisei make their grand entrance and a minor fight is held but quickly cut short. Major characters assemble and are re-introduced.

#17 - Funeral Program for a Contracted Monk

Keisei's funerals are celebrated and Ouri decides to become a priest because now the only thing that his brother has left to him is Makina. He understands that the night of the Keisei's death has changed his life for ever...

Keisei learns that Minai is dead after being killed by an auditor, which is strange to him since Ouri was hiding her. He rushes out of the hospital to his superior, Bishop Gon to confront him. Afterward, Ouri is called out by Kasuka to look at a magazine featuring a cult with followers that regenerate after being burned alive. Under the belief that it is related to the Shikabane, Ouri visits this cult only to discover it to be a hoax instead. Upon Ouri's departure, the cult leader is visited by Seven Corpses calling themselves Skikusei Hokuto. He is killed by Hokuto, the leader of the Shichisei Hokuto. The group is contacted by the Kougon traitor, Akasha to plot the elimination of the Kougon shikabane sect, Shouhouha. Meanwhile, Keisei tracks down the auditor to Ouri's part time job. Forced to keep hidden, the auditors leave suddenly. Finally we see Makina's visions of the Shichisei Hokuto, suggesting she was killed by them.

Makina Hoshimura, a deceased teenager, is given her first mission to eliminate dead corpses on Earth. Her target is Hagino, a criminal accused of killing women, who came back from the dead as a vampire corpse.

Minai defeats the Corpse, Mitsuyoshi, with some help. After killing him, Ouri has his cell phone taken away for "evidence" by Minai. After school, Minai and Ouri go buy a new one together. Later Minai's contract priest is killed by a group of thugs making Minai a normal Corpse. She is hunted down by other shikabane hime, but escapes with Ouri's help. He takes her to the bar where he works and says she will be safe there. There, she is told that if she makes a contract with Ouri she will be able to survive as a shikabane hime. She then kills herself (or is killed), saying that she is Shuuji Isaki's shikabane hime.

Makina defeats the SUV corpse after being assisted by Keisei. The rogue priest is revealed to be Akasha, a member of the Kougun cult who went underground due to his radical views of using Corpses as instructed. Keisei uses a cube filled with the blood of dead corpses as a shield to temporarily defeat Akasha, who retreats. The entire Kougun cult is shocked to learn that Akasha has resurfaced while contemplating plans to reinstate Keisei back with them.

Ouri encounters an ex-high school student named Mitsuyoshi, who had somehow turned into a Corpse with telekinetic abilities after dropping out of school. Despite Makina and Minai's intervention in trying to kill him, Mitsuyoshi's abilities and his fighting strength somehow hampers their efforts in subduing him.

Makina is tasked to hunt down an unknown Corpse responsible for killing off young women. Keisei learns that someone familiar with Corpses is using a doctor to conduct illegal experiments on dead bodies in order to turn them into monsters.

A Corpse disguised as an SUV roams around the Greater Tokyo Area, killing off anyone who dares to enter it. Keisei tells Ouri the true nature of his job, which results in his suspension unless he kills Ouri. A new Shikabane Hime team arrives, namely Itsuki Yamagami and her contractor priest Takamasa Sougi, to deal with a rogue Kougon cult priest.

Makina completed an Enkiri to get rid of the rotten rune. Meanwhile, Ouri is continuing training but Makina interrupts Ouri in the hot springs and demands to be released from the contract. She is then captured and put in prison. "Genpaku" Takamasa takes Ouri to observe one of his missions to kill a corpse.