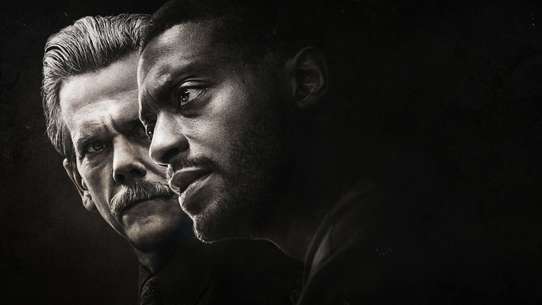 The BEST episodes of City on a Hill

In early 1990s Boston, Assistant DA Decourcy Ward forms an unlikely alliance with a corrupt yet venerated FBI veteran, Jackie Rhodes. Together, they take on a case that ultimately changes the city's entire criminal justice system.

As Decourcy prepares to take Sinclair Dryden to trial, despite pushback from the Suffolk County DA, Jackie tracks down a key witness. Siobhan reaches a settlement on behalf of the Mendoza family, but her moment in the spotlight is cut short. Caysen is offered a second chance by a loved one. Reckoning with the rifts in her own family, Jenny meets her long-lost half-brother.

When an unlikely source confides in Decourcy, the Massachusetts State Police hatch a plan that promises arrests without the help of the FBI. However, keeping out of the way is not exactly Jackie’s strong suit. The Genesis Coalition pitches a new strategy to curb Boston’s crime rate. Jenny opens up about her past to a sympathetic ear.

As Jenny grows closer to Diarmuid Doyle, her unwitting husband Jackie is released from the hospital — and he’s after revenge. Siobhan calls on Decourcy for help cornering Needham Industries as she fights to expose the corporation’s malfeasance. After a break in the case against Sinclair Dryden, the DA’s office bumps up against an unforeseen obstacle.

Decourcy pursues justice in and out of the courtroom. Despite his maneuvering, Jackie discovers he can't escape his past, and Jenny finally confront hers. Cathy says goodbye to the root of her struggles. Siobhan has sights on a new dream.

#5 - Mayor Curley and the Last Hurrah

Jackie celebrates another moment in the spotlight, though an unfamiliar pang of guilt leaves him reflecting on his legacy. Decourcy considers the best course of action to finally carry out justice for the murdered guards. Jimmy is desperate to weasel his way out of the mess he’s created, even if it means putting his brother’s future into question. Jenny faces what has been haunting her all these years. Season finale

#6 - Is the Total Black, Being Spoken

Jackie uncovers one of Decourcy’s informants and hatches a plan to use him as a pawn to discredit the Assistant DA. Siobhan receives some welcome news, in the midst of plotting her run for City Council. Jimmy Ryan faces problems far worse than a guilty conscience.

With the gang’s arms dealer in custody, Jackie thinks he’s a step closer to glory. But Decourcy is the one in a position to negotiate and he’s considering cutting off the gun supply rather than going after the buyers. Jimmy and Frankie must find a new dealer as they prepare for their next job. Cathy and Jenny struggle to comfort their daughters who’ve undergone trauma. When Michaela falls into some trouble, Rachel decides to take her investigation into her own hands.

Struggling to make ends meet after leaving the FBI, Jackie Rohr gets a job offer from his old mentor. The perks are enticing, but Jackie has no idea what he’s getting himself into. ADA Decourcy Ward eyes a promotion but is diverted by some bad news which lands him back in Brooklyn. Siobhan Quays, having left her prestigious law firm for a position at the ACLU, takes on a case against a construction colossus. Jenny Rohr begins volunteering at a community center where she runs into a familiar face.

U.S. Attorney Karen Shimizu tries to get rid of her troublesome agent once and for all. Jackie schemes his way into a new mission. At the Suffolk County Courthouse, Decourcy and Siobhan spar on opposing sides of a legal battle. Meeting dead-ends at every turn in the effort to help her son, Grace does something desperate. Jenny surprises Benny with some rebellious fun. Cathy re-ups her supply by going straight to the source.

Decourcy is a step closer to connecting the stolen guns to the Revere robbery when an insider agrees to talk. Jenny no longer can ignore Jackie's indiscretions after they show up on her doorstep. Money problems worsen for the Ryan family.

#11 - High on the Looming Gallows Tree

Jackie celebrates a win in front of the cameras but, behind closed doors, he reaches a new low. A shining moment from Decourcy promises a potential future in politics, but any pride Siobhan feels for her husband is squandered by an unexpected betrayal. The Grand Jury reconvenes, and this time Sheik doesn’t get off easily. Thanks to Signa’s detective work, the Ryan family is now under the watchful eye of the Suffolk DA.

With the evidence against Sinclair Dryden piling up, Jackie takes action. As Decourcy fights to prove Curtis Whitaker’s innocence, Caysen, who is desperate to clear his own name, entertains a compromise. Siobhan makes headway in her case against Needham Industries but is set back when a reporter comes asking questions. Jenny meets with a lawyer to discuss her father’s lawsuit.

Assuming the involvement of the Campbell brothers at the Copeland territory shootout, Jackie confronts Grace, who can no longer sidestep her sons’ criminal activity. Resenting the outcome of a negotiation that he could not take part in, Decourcy finds comfort in the strength of Siobhan, who keeps her head even after tragedy strikes. Jenny insists on helping Maeve, whether or not that means defying Jackie.

Jackie shows a glimpse of vulnerability when a violent attack stalls the Dryden investigation, but Decourcy presses on, tracking down a list of Sinclair’s potential victims. Caysen is formally brought on as an investigator in the DA’s office, where he must navigate competing interests. Siobhan weighs risking everything she has built to reveal the truth about her past. Jenny’s suspicions are reinforced.

Kelvin struggles to lead the Braxton Boys. Jackie homes in on Grace. Decourcy finds himself at a disconnect with Siobhan, as he seeks vengeance while she focuses on recovery. Cathy pays a visit to old friends.

#16 - A Program of Complete Disorder

When Victoria Dryden runs away from home, Sinclair sends Jackie to find her. Caysen is after justice for BPD Officer Russ Wallace, who he believes may have been intentionally executed by another member of the Strike Force. The incident sparks a dispute at the Ward home in Brooklyn, where Decourcy is looking after his ailing father. While building a case on behalf of her impaled client, Siobhan experiences an intensifying array of symptoms. Diarmuid Doyle tries to help Jenny remedy what has been bothering her, but his plan backfires.

Jackie reckons with the destructive consequences of his actions. Rickey Townsend prepares to testify against Decourcy. With violence intensifying between the Copeland Crew and the Braxton Boys, Decourcy, Anton and Siobhan face off in the interrogation room. Left reflecting on her role as a mother and leader in the community, Grace makes an unfortunate miscalculation. Jenny makes fast friends with the mysterious woman from Belfast.

Vying to become Boston’s next DA, Decourcy takes on a murky case involving a murdered police officer. He recruits the help of Caysen, who is becoming increasingly alienated from the officers in his unit. As the Drydens try to solve their Victoria problem, the Rohrs drop Benedetta off for her freshman year at NYU. They return empty nesters but to no peace and quiet. When Siobhan receives a distressing phone call, a dark secret resurfaces.

As Jackie continues his fling with Letitia Dryden, Jenny sets out to get her husband reinstated in the FBI. The pressure on Decourcy mounts when a colleague competing for the position of DA lands a conviction. Caysen testifies at the federal trial of Tony Suferin and is blindsided by the consequences. A threatening interaction offers Siobhan a sense of what exactly she is up against in her fight for the Mendoza family.

When an assistant U.S. attorney overdoses and ends up left for dead, Decourcy Ward suspects Jackie Rohr's involvement. In turn, Jackie goes after the BPD for a questionable drug arrest at a federal housing project. Community activist Grace Campbell recruits Siobhan Quays to work on behalf of Braxton and its residents, but their efforts are subverted as tensions flare between rival gangs.

#21 - The Wickedness of the Wicked Shall Be Upon Himself

Jackie strong-arms Jimmy to get a step closer to finding the armored truck guards. Decourcy rattles a suspect called to testify before the Grand Jury. Siobhan learns something unsettling about a leader of the Coalition.

#22 - If Only the Fool Would Persist in His Folly

Jackie searches for his absent informant. Searching for purpose, Jenny revisiting her passion to become a teacher. Decourcy works up a plan to overcome the town’s infamous 'Code of Silence' and get a few suspects to talk. Minogue is assigned a big case, but not the one he actually cares about. Jimmy skips town to visit his kids and finds that, even a thousand miles away, he’s not safe from his problems back home.

As Decourcy increases pressure on the Justice Department, Jackie counters by looking into his adversary’s romantic past. While Jackie’s digging up dirt, Siobhan is planning ahead, focused on starting a family even as Decourcy remains preoccupied by the escalating conflict. Jenny realizes she can’t keep ignoring her mother after an unsettling phone call. With business at the salon all but dead, Cathy Ryan turns to an unlikely income source.

After an eventful Sunday at church, Decourcy finds out he has a new powerful enemy in town—one that puts his wife in an awkward position. Jackie is stirring up trouble in his own home, and his distrustful mother-in-law is onto him. Investigators Hank Signa and Rachel Behnam look into an unsolved missing persons case connected to the robbery in Revere. That could mean trouble for Frankie Ryan, who’s busy laundering his most recent loot and, with the help of his brother, getting carried away in the process.

#25 - From Injustice Came the Way to Describe Justice

Jackie and Decourcy continue to hunt down the weapon connected to the Revere robbery. Local reporter gets a tip that could lead her down a treacherous path. Siobhan questions whether doing what is right is ultimately what is for the best.