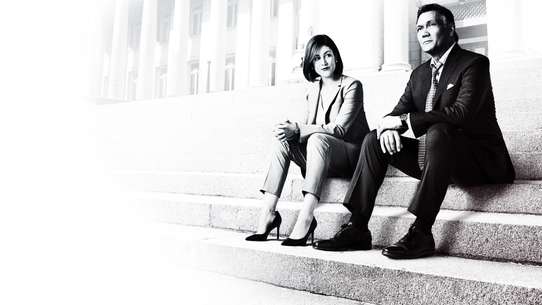 Coming from a famous Memphis family known for taking on injustice, brilliant lawyer Sydney Strait used to work at her father Elijah's celebrated law firm until their tumultuous relationship got in the way. After barely speaking to him for years, Sydney is suddenly thrust back into the family fold when her philanthropist mother passes away unexpectedly. In the wake of her loss, hoping to reconnect with the daughter he loves, Elijah asks Sydney to rejoin his firm. She agrees because despite her lingering resentment and distrust, she knows that working alongside her father is her best hope at changing the world... if they can ever get along.

Sydney and Elijah race against the clock to get political asylum for a journalist whose life is at risk. Emerson plans a Thanksgiving surprise for Elijah.

Emerson's mother, General Virginia Howe, arrives in town with a life-or-death case she wants Sydney and Elijah to take. Delia helps her son deal with her father's meddling behavior in the family business.

Sydney and Elijah help a twelve-year-old girl find justice for the failed levee system that flooded her town. Della and Anthony fight for an old blues musician's song rights.

Elijah and Sydney must put personal feelings aside to help a group of farmers in danger of losing everything to an insidious corporate scheme. Anthony and Jake team up to take on a seemingly lighthearted case about a stolen barbecue sauce recipe.

The fate of an innocent man is in the hands of Elijah and Jake. Meanwhile, Sydney and Anthony take a case brought to them by an old professor, and it may be more than it seems.

#6 - Fire in a Crowded Theater

After a young woman is murdered Elijah and Anthony take on hate-speech in a case against a controversial leader who is represented by Elijah's old friend and attorney Rachel Madsen.

Sydney, Elijah and Briana take on a pill mill owner responsible for creating an addiction epidemic in a small Tennessee town. Jake helps George move forward in his post-prison life.

In the aftermath of her family tragedy, top corporate attorney Sydney Strait puts aside years of conflict with her father Elijah to rejoin his legendary civil rights firm and take on a chemical company whose product may cause cancer.

Elijah and Sydney help a Catholic teacher who is fired from her school after undergoing IVF treatment. Anthony gets involved with Briana's nephew when he is prohibited from competing on the high school wrestling team.

Sydney and Elijah try two separate cases for ex-college football star Marcus Wright, who is dying. Della is presented with a lifetime achievement award from the LGBTQ community.