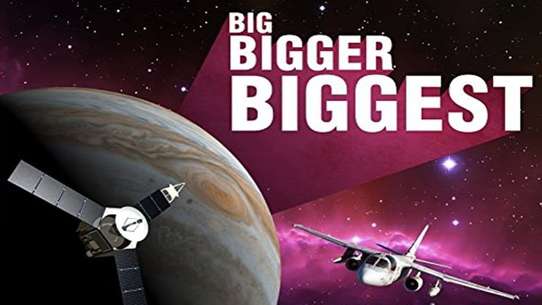 How did bridges evolve in size from tiny bamboo walkways spanning streams to long suspension bridges connecting distant islands? How did buildings surge in stature from ground-hugging houses to cloud-busting skyscrapers? We reveal evolutionary engineering leaps that enabled different types of structures to explode from big to bigger to biggest.

Over 4 million people use the London Underground every day. Find out how four key inventions in a series of landmark metro systems helped it become the biggest subway in the Western world.

Continuing this week is the factual series that examines the evolution of modern engineering. This edition studies the leaps in structural technology that led to the development of the world’s largest free-standing dome – the Kyushu Oil Dome in Oita, Japan. Home to the J League football club Oita Trinita, the Kyushu Oil Dome measures over 270 metres across and stands at 20 storeys high. Made of steel, Teflon and titanium, the roof can open at the flick of a switch, and allows sunlight into the stadium below even when closed. The pinnacle of modern structural engineering, this gargantuan dome owes its existence to nearly 2,000 years of innovation.

A chronicled look at the evolution of the warship, with a viewing of the US Navy's state of the art USS George H. W. Bush.

The Akashi Kaikyo Bridge in Japan is the longest suspension bridge in the world. See how technological breakthroughs led to the development of this supersized bridge.

Continuing this week is the factual series that examines the evolution of modern engineering. The third instalment explores the leaps in aviation technology that led to the development of the world’s largest cargo plane – the Antonov An-124. Weighing in at 392 tons, the Antonov An-124 can carry tanks, trains and even other aircraft to the farthest corners of the globe. The pinnacle of modern aeronautical engineering, this gigantic cargo plane owes its existence to nearly 100 years of innovation...

The Singapore Flyer is tallest Skywheel on Earth, rising 165 metres into the sky. It can whisk 1,260 passengers around hourly to see a stunning 45 km panorama of three different countries below. Twice the height of the Statue of Liberty, the ground-breaking observation wheel effortlessly rotates 28 luxury capsules through the sky, each carrying 28 passengers. Extraordinary engineering ensures the wheel stands firm against the area’s monsoon rains, thunderstorms and dangerous Sumatra wind squalls. But the Singapore Flyer wasn’t built in a day. It stands on the shoulders of historic engineering achievements that have allowed it to grow so tall. This film explores five landmark observation wheels – including the original Ferris Wheel and London Eye - that each feature a major technological innovation that contributed to the construction of the Singapore Flyer.

Factual series examining the evolution of modern engineering. This edition studies the technological leaps forward that have allowed the construction of the world's biggest space station - the International Space Station (ISS), scheduled for completion in 2011. One of the greatest engineering feats of all time, the ISS weighs some 450 tons and spans the area of two football pitches, yet hurtles 200 miles high above the earth at 17,500mph.

The Three Gorges Dam harnesses the power of China’s great Yangtze River. The gigantic structure is over two kilometres long, towers over 60 storeys high and creates a reservoir of 600 kilometres in length. On completion, the scheme will be able to generate 22,500 megawatts of power – enough to supply electricity to 60 million people. However, the Three Gorges Dam has some important predecessors to thank for its existence. It stands on the shoulders of engineering achievements that have made its immense scale possible. This film charts the stories of six historic inventions, embodied by six landmark dams. One by one, the incredible stories behind these structures, and the technology that allowed them to grow bigger and bigger, are revealed.

At 57 km long, the Gotthard Base Tunnel is the longest and deepest tunnel in the world. Every day, 2,000 workers descend into the Swiss Alps, braving the heat and dust to continue work on the mammoth engineering project. Their mission is to solve the biggest traffic congestion problem in Europe. It is hoped that when it is completed, the tunnel will revolutionise transport across the Alps. From 2017, high-speed trains will be able to make the trip faster than an aeroplane. However, this daunting project would not be possible without six innovations.

Powering through the waters of the Caribbean, the Independence of the Seas is longer than New York’s Chrysler Building is tall and wider than the White House is long. The largest cruise liner in the world, this 18-deck leviathan cost some $800million to build and generates enough electricity through its six diesel-electric engines to power the city of Southampton. The Independence carries 4,370 passengers in unrivalled luxury, while some 1,360 staff work behind the scenes in the control rooms, kitchens and engine rooms. Nearly four million square feet of steel in the form of prefabricated blocks were required to build the ship, while hi-tech ‘azipod’ propulsion units and bow thrusters make it incredibly manoeuvrable for a vessel of its size. However, the Independence of the Seas was not built in a day. The 160,000-ton giant and the maritime engineers that designed it relied on a number of historic engineering achievements. ‘Big, Bigger, Biggest’ charts the technological developments that preceded the completion of the Independence, focusing on six iconic ships that embodied the advancements of their ages.

The tallest man-made structure on Earth towering nearly half a mile into the sky is the Burj Dubai Skyscraper in the Persian Gulf. This film reveals how seven ingenious technological breakthroughs enabled engineers to build this super-structure. From its double-decker elevators and fire-proof evacuation rooms to its unique wind-cheating design. Using a mix of stunning CGI animation and on-location filming, this film reveals the innovations that changed Skyscraper design forever and enabled them to grow in size and scale from BIG to BIGGER into the Burj Dubai the Worlds BIGGEST."

The Panama Canal is set to double its capacity almost a century after it opened. Find out why its success lies in four key breakthroughs that enable ever bigger ships to navigate landlocked areas.

Heathrow Airport in London is the busiest international airport in the world. This film reveals how seven ingenious technological breakthroughs enabled engineers to build the most modern terminal of this super-structure Terminal 5. With its enormous free span roof and fully automated baggage system to the robotic vehicles speeding passengers to its doors, T5 is designed to feed 30 million extra passengers through Heathrow. Using a mix of spectacular CGI animation and on-location filming, this film shows in stunning detail the innovations that changed airports forever and enabled them to growfrom BIG to BIGGER into Heathrow Airport the Worlds BIGGEST.

Continuing this week is the factual series that examines the evolution of modern engineering. This edition studies six developments that have made the construction of a giant floating oil rig possible. The 45,000-ton Perdido platform lies in the Gulf of Mexico with pipes stretching 3,000 metres into the sea. This feat of offshore engineering is largely due to six design breakthroughs stretching back to the first oil rig over water in 1891....

France’s TGV has been pushed to 575 kilometres. Examine four iconic trains and the breakthroughs that enabled the development of the fastest train on the planet.

Find out what made it possible for the world’s largest icebreaking ship to smash through solid ice a metre and a half thick and pulverise blocks of ice the size of a car with its huge propellers.

This second instalment of the show that explores major leaps in engineering reveals how six technological breakthroughs enabled the construction of gigantic submarine, the USS Pennsylvania. First commissioned in 1989, the USS Pennsylvania is the biggest submarine in the western world. However, the construction of this mammoth underwater warship would not have been possible without six key innovations... This programme examines all six, and details how the monster submarine developed.

Explorer how innovative breakthroughs on six landmark telescopes contributed towards the development of the world's largest telescope, allowing astronomers to see further into space than ever before.