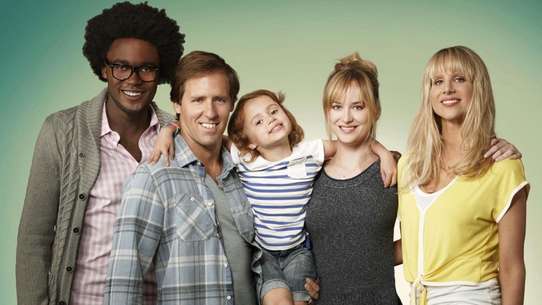 The BEST episodes of Ben and Kate

Kate Fox followed the rules all her life…until she got pregnant in college and dropped out just shy of graduation. After the birth of her daughter, Maddie, Kate put her twenties on hold. Now working as a bar manager to make ends meet and maximize her time with five-year-old Maddie, she’s uber-prepared for every possible catastrophe – except for the arrival of her older brother, Ben Fox.

With Career Day at Maddie's school coming up, Ben wants to find an actual job so he can make his niece proud. Meanwhile, Kate starts to develop a crush on her neighbor Will, and BJ face backlash from a co-worker at the bar for getting a raise.

When a high school reunion is held on the eve of Thanksgiving, Will (guest star Geoff Stults) encourages Kate to attend and stand up to the high school bully, Anna (guest star Amber Stevens) for giving her an unforgettable nickname. Meanwhile, in the midst of the holiday season, Ben doesn't think he can keep much longer the huge secret that he and BJ have been hiding from Kate.

When Maddie fails the test to get into the gifted program at her school, she becomes part of "The B-Squad." Kate, who blames herself for Maddie's failure, decides to take matters into her own hand and gives The B-Squad an unforgettable experience. Meanwhile, Ben runs into an old pal from college who stole one of his business ideas, and BJ's mother, Wendy, comes to town and gets a surprising introduction to Buddy.

Tommy finally brings around his new girlfriend, Lila, to meet the gang. But when Kate suggests the two women get to know each other, things don't go as planned. Meanwhile, Ben moves forward with his "Rail Mall" business plan.

Although Ben, BJ and Tommy disapprove, Kate and Will take their relationship to the next level when they go on a romantic camping trip together. Of course, the trip quickly goes awry when some unwelcome guests decide to tag along. Meanwhile, BJ makes it her mission to help Tommy move past his feelings for Kate.

When Kate sees the face that Will makes while playing guitar during his cover band's performance, she gets turned off and unable to take him seriously. Meanwhile, Tommy gets Ben a job at the country club which soon backfires for both of them, and BJ attends a support group where she gets good advice about her friendship with Kate.

Kate gets invited to her hot neighbor's Halloween party, so BJ tries to help Kate break free and be someone completely out-of-character for the night. Meanwhile, Ben and Tommy decide to stay home and hand out candy to the trick-or-treaters in hopes that they'll meet some hot moms, but the night takes a turn when Tommy unknowingly eats some of BJ's "candy" from Amsterdam, and Kate bonds with Will (guest star Stults), a single father.

When Ben decides to throw a birthday party for Kate against her wishes, her frustration soon turns into excitement when she realizes that Ben invited Molly, Kate's wild friend from high school, to her party. Meanwhile, Ben finds out that Darcy, the only woman he truly cared for, is moving into what used to be his and Darcy's dream home with her new husband, and Tommy comes clean to Kate about why he hates Molly.

Ben and Kate discover an unopened envelope from 15 years ago that contains the yearly scavenger hunt their dad used to organize for them when they were kids. The find prompts them to complete the unfinished hunt, but raises old issues of sibling rivalry. Meanwhile, the scavenger hunt takes an unexpected detour for Kate when BJ enlists her to help get belongings back from an old fling.

When Ben Fox discovers that his ex-girlfriend, Darcy, is getting married, he sets out to crash the wedding. Meanwhile, Kate gets advice from her friend BJ on how to obtain more sex appeal on her first date with her new boyfriend, George (Jon Foster). As a result, their first date is disastrous. Ben then finds out that George is cheating on her. Ben rushes to tell Kate about George's infidelity. George makes up a lame excuse on why he is with another woman; shortly after, Kate breaks up with him. Elsewhere, Ben only has fifteen minutes to crash the wedding, but he is too late. In the end, Ben moves in with Kate and her daughter Maddie.

Ben continues to expand his "Rail Mall" idea with his new business partner, Vera, but when she brings in more associates to help expand their plan, Ben doesn't like the direction in which it’s heading. Meanwhile, after finding out that Will has been dating since their break-up, Kate goes on a date with a baker she met at Will’s party. Also, BJ and Maddie pose as mother and daughter for a commercial audition.

Now that Ben is living with Kate and Maddie, Kate wants Ben to be more responsible and prepared for potential emergencies, where Maddie is concerned. Of course, Ben thinks there isn't a plan for everything. Meanwhile, Ben's crazy ex-girlfriend Louise makes a surprise visit and BJ might actually be developing real feelings for her boss, bar owner Buddy.

Ben finishes settling in Kate's home. Meanwhile, Kate lies about her residence to get Maddie into a better school district, but when her plan falls apart, she must admit the truth to Maddie's principal (Alan Ruck). Additionally, Katie tells Ben that he needs to be more strict when disciplining Maddie.

When Ben and Kate's father, Randy, pays an unexpected visit, chaos ensues. Kate starts asking big questions about herself and her life trajectory, causing a big fight between her and BJ. Meanwhile, Ben confronts his dad about all the things they never did together, as they search, with Tommy, to finally find and accost Maddie's dad for running out on Kate.

Kate returns to college, determined to focus on her studies instead of boys this time around. Ben is excited to celebrate his two-month anniversary with girlfriend Vera.