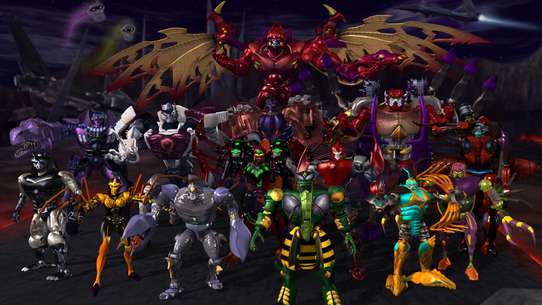 Trapped on a primitive planet, two opposing factions, the Maximals and the Predacons, of Transformers, a race of sentient robots, fight over its precious Energon. Soon they discover that there are other forces at work on the planet - a powerful alien race that does not approve of their presence. And as they delve deeper into the planet's history, they uncover a terrible secret, one that must not be allowed to fall into the wrong hands, or their entire race's very existence could be threatened.

Dinobot sees a chance to regain his lost honor when he spots Megatron attempting to alter history using the knowledge on the remaining golden disk.

The Maximals manage to take out the transwarp cruiser and fend of the Predacon attack. But the battle is far from over, as Megatron heads for the now uncovered Autobot Ark - containing the heroes and villains who'll shape the Cybertron where the Predacons and Maximals come from.

Destruction rains down on the Maximals as Megatron unleashes the weapons of the Nemesis. Optimus orders a desperate attempt at getting the Ark airborne.

Megatron is captured, but the battle used up too much of the cruiser's energon supply for there to be enough for the travel back to Cybertron. While Ravage interrogates Megatron about where they might find more, Primal confronts Silverbolt about his relationship Blackarachnia, leading the Fuzor to go off on his own to find her.

While Inferno, Quickstrike and Waspinator go looking for a new ""colony"", Megatron discovers one of Tarantulas' secret projects - the reactivation of the gigantic Decepticon warship that shot down the Ark before it crashed into the sea.

As the transwarp wave generated by the explosion in ""Other Voices (2)"" nears Cybertron, the Maximals rejoice, thinking the rescue is on its way. But unbeknownst to them, it is intercepted and diverted by the leaders of the Cybertronian Predacon alliance, who view Megatron as a loose cannon and wants to deal with him quietly, by sending one of their covert operatives.

Hopelessly outnumbered and outgunned, Rattrap, Cheetor and Dinobot try to keep the Predacons away from the Axalon where Rhinox lies delving deep into the Matrix, pursuing a faint hope...

Using a newly discovered blank protoform, and his part of Rampage's spark, Megatron creates a clone of Dinobot incorporating his enhanced transmetal 2 technology. Discovering the experiment, Cheetor and Depthcharge try to destroy the equipment, but it is activated during the fight and blows up - the cat getting caught in the blast.

Rhinox spots a falling stasis pod while surveying unused Predacon territory. He is the first to arrive, but the pod is damaged and he is unable to activate the DNA scanner. Unless he can get it working again soon, the protoform's spark will be extinguished.

An alien spacecraft lands and captures Airrazor while she's examining it. Optimus and Rattrap enter to rescue her, while the Predacons stand outside, ready to break the truce at a moment's notice.

A series of earthquakes uncovers a heavily damaged stasispod. Out of it comes a freakish robot - barely sentient, but with extremely powerful weapons. Scoffed at by the others, both Silverbolt and Rampage sense a kindred spirit, each in their own way.

Blackarachnia attempts to use the transmetal driver on herself, but all it accomplishes is to disrupt her Predacon programming, making it deteriorate quickly to the point that it will make her mindless unless it is removed.

Two new Maximals awake in Predacon territory, both with bizarre looks and unusual personalities due to the damaged systems in their stasispods. Taking advantage of their confusion, Megatron convinces them they are Predacons, hoping to finally crush the Maximals with these reinforcements. Meanwhile, Blackarachnia returns to the Predacon base with Tarantulas' body, Tigatron and Airrazor go of looking for more stasispods, Rhinox shuts down and connects to the Axalon in an attempt at reaching Optimus' spark, and Dinobot realizes that the aborted armageddon has left the planet looking awfully familiar.

Cheetor discovers a huge stasis pod, containing Protoform X - a failed Maximal experiment that created an indestructible spark but drove it insane in the process. When Predacons arrive, a fight breaks out over it, setting off an energon storm that leaves Blackarachnia and Silverbolt together damaged, having to fend for themselves - While Protoform X awakens, looking for a victim...

A stone circle, showing abnormal energon readings, is activated during a Predacon attack and attracts an alien probe. While investigating it, Optimus is disintegrated, leaving the Maximals bickering over who's in charge, while the Predacons prepare to attack.

Surviving the energon surge thanks to their new transmetal bodies, Tarantulas sets up a shield around the alien construct and heads inside along with Megatron and Quckstrike. Outside, Optimus and Rattrap try to figure a way in, while the two other transmetalized Maximals return the wounded Rhinox and Dinobot the CR chambers.

The alien machine is destroyed and Optimus went up with it, but the explosion sets off a quantum surge that changes the planet - and several of the robots. In his new, more powerful transmetal body, Megatron hopes to take out the Maximals before they have a chance to regroup and recover.

During a fierce storm, the immortal spark of the Deception Starscream lands on the planet and takes control of Waspinator's body. He convinces Megatron to let him help with an attack on the Maximal base, which he knows to be offline. His skills are after all considerable... but then again - so is his treachery.

Dinobot challenges Optimus for leadership of the Maximals, but while they fight the Predacons launch an ambush.

Optimus is implanted with one of Tarantulas' bugs, this one letting Quickstrike remote control him. After securing the Maximal base, Megatron goes after the original Megatron's spark, hoping it will give him equal power to Optimal Optimus.

One of the Maximal stasis pods, put in orbit before the crash, falls down in the north, and Optimus rushes out to retrieve it. Unfortunately, Megatron anticipates this and sets up an ambush that nearly kills the Maximal leader. Without a flyer, the Maximals race to the pod in hope of getting it before the Predacons reprogram the dormant robot inside.

Optimus and Rattrap race to the island to assist Tigatron and the wounded Airrazor, while Scorponok and Blackarachnia make their way towards the obelisk.

Dinobot is captured while on a recognizance mission, and surprisingly asks Megatron for permission to rejoin the Predacons, offering the golden disk as proof of his sincerity.

Cheetor becomes trapped in Tarantulas's net of deceit and torture.

The aliens, the Vok, send Tigerhawk to Earth to stop Megatron's meddling with time. He crashes into the Predacon base, but the Predacons have no intention of takeing this lying down... especially Tarantulas.