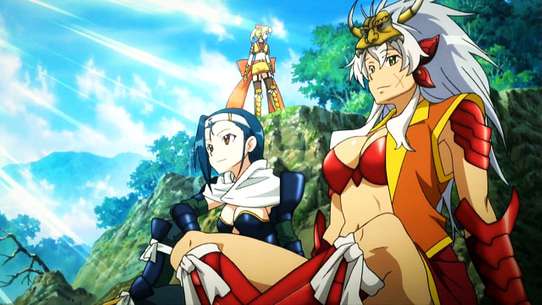 Hideyoshi is a normal modern middle-schoolgirl. However, she is one day transported to a world very similar to feudal Japan, with the exception that there are no men! There, she meets Oda Nobunaga whose ambition it is to unite all the land under her rule and gather together the Legendary Crimson Armor.

Hideyoshi, Nobunaga and Akechi head to the village that was burnt down the previous night. With the victims downhearted due to losing their homes, Hideyoshi uses her own unique methods to lift everyone's spirits. Later that day, Hideyoshi speaks with the talking dog she met earlier named Shiro, who tells her she has ended up in the past of an alternate world which doesn't have any men. The next day, Akechi starts training Hideyoshi to become a warrior. Despite losing all of her sparring matches with Akechi, Toyoomi shows promise fighting with a staff, having previously seen a tv program about Kung Fu, and is made Oda's retainer.

Nobunaga, Hideyoshi and Akechi go to meet with Yoshimoto Imagawa to negotiate for the left leg of the Crimson Armor, along with Ieyasu Tokugawa, who also resembles one of Hideyoshi's high school friends, but Yoshimoto refuses to hand it over. Not wanting to use her forces to obtain, Nobunaga gets an idea from Hideyoshi and settle things via recreation, challenging Yoshimoto to a variety of games. After reaching a tie, the final game involves kite-fighting, with Hideyoshi and Ieyasu attached to kites with fireworks attached to them. Hideyoshi's firework doesn't go off thanks to Ieyasu's attacks and Ieyasu goes up instead. Hideyoshi manages to catch her from falling, but then her firework goes off after all. At the end of the day, Yoshimoto admits her loss and gives Nobunaga the armor piece and Hideyoshi is rewarded with some Japanese sweets.

Nobunaga, Hideyoshi and Akechi bear witness to a lengthy battle between Kenshin Uesugi and Shingen Takeda, who both possess pieces of the Crimson Armor. As Hideyoshi tries to take a picture with her phone, it gets hit with an electrical discharge from the battle and breaks. Akechi becomes downhearted when her idea to retrieve the armor is rejected by Nobunaga. After running into Ieyasu, Akechi decides to go behind Nobunaga's back to try and obtain the armor for her by turning Kenshin and Shingen against each other, tying up Hideyoshi when she learns of it. After Nobunaga frees Hideyoshi, she punishes her by stealing her glasses before going to meet Kenshin and Shingen herself, challenging them both to a battle for the armor. After Nobunaga defeats Shingen in battle, she agrees to relinquish the armor if she kills her, but Kenshin stands in their way, offering her life to save Shingen. Nobunaga chooses not to kill either of them and accepts both pieces of the armor.

Yoshimoto and Ieyasu invite Nobunaga, Hideyoshi, Akechi, Shingen and Kenshin to go hawk-hunting, in which they use trained hawks to hunt for food. When the hawk goes into a mysterious wood whilst chasing after a rabbit, the others venture in, where they find Masamune Date sitting round a gathering of dead samurai who are forcing her to tell 100 ghost stories. The others soon learn they can't leave the forest until they tell all 100 stories, which proves to be difficult since none of Nobunaga's stories are scary and Akechi is easily frightened. Being mocked by the others, Hideyoshi gives Nobunaga a story from her time, the performance of which proves to be so scary it puts out all the remaining candles, allowing the dead samurai to pass on and the others to leave. Ieyasu is seen conspiring with her aides, planning to encourage Nobunaga to complete the armor so that she can take it from her.

Akechi recalls the day she first met Nobunaga, who took a liking to her and showed her a world outside of her workaholic life, asking for her help in conquering the land. Meanwhile, Nobunaga takes Hideyoshi through the inspection tunnels, talking about the good luck charm she received from her grandmother, Nobusada. However, as they prepare to head back, Hideyoshi accidentally activates the security system, filling the way back with deadly traps. Meanwhile, Masamune talks with Akechi, before Nobunaga and Hideyoshi manage to escape from the tunnel. It is revealed that Masamune is actually Hideyoshi's teacher, who travelled back from the present after discovering someone that came out of the shrine and then disappeared.

As Nobunaga and co. put together a play as per Hideyoshi's reccomendation, Akechi becomes irritated with Hideyoshi. Having trouble coming up with a script, Hideyoshi ends up adapting one of Yoshimoto's yuri stories. After rehearsals, Hideyoshi is troubled both by Shingen and Kenshin vying for bigger roles and Ieyasu's controversial suggestion for an ending. On the day of the play, after the various script changes pan out (which included Hide inadvertently adopting Akechi's role as Oda's lover, flustering Akechi, and Shingen and Kenshin acting likewise, but actually were trying to outdo each other in performance), Ieyasu's servant, Hanzou, ends up setting fire to the stage, trapping Hideyoshi inside, but Nobunaga comes to her rescue. Following the success of the failed play, Masamune informs Nobunaga about the location of the last pieces of the Crimson Armor.

Nobunaga, Hideyoshi and Akechi travel on foot towards Saigoku to negotiate for the remaining armor pieces. Stopping in a town to rest, the villagers show fear towards Nobunaga, believing rumors that she eats children. This turns out to be due to Akechi's attempt to spread word of Nobunaga's kindness, which somehow got scrambled as it was passed along from person to person. After another long hike, they came across a village with a hot spring, which Hideyoshi spends too long in and catches a fever. With her fever worsening, Masamune anonymously donates some modern medicine from her time, claiming it to be from overseas. With Hideyoshi unable to take the medicine, Nobunaga delivers to her via a kiss, which Akechi happens to witness. As Hideyoshi recovers the next morning and the trio arrive in Saigoku, the three owners of the armor keep an eye on them.

As Mitsuhide becomes downhearted having seen the 'kiss' between Hideyoshi and Nobunaga, the trio are confronted by the three owners of the armor, Chosokabe Motochika, Otomo Sorin and Mori Motonari. However, they are easily restrained by Nobunaga, who tickle tortures them into telling her the location of a chest containing the armor. However, Mitsuhide becomes too focused on her jealousy that she doesn't notice the chest is booby-trapped before handing it to Nobunaga, who barely avoids it. The Saigoku Trio escape and kidnap Hideyoshi, taking her to the top of the mountain and demanding Nobunaga bring the rest of the armor. Nobunaga and Mitsuhide become separated, with Nobunaga facing Motonari while under the effect of an anesthetic, while Mitsuhide faces Motochika and Sorin, who exploit the weaknesses in her confidence. However, they manage to regain their resolve and win their respective battles and gather the remaining armor. As Mitsuhide falls deeper into despair over Nobunaga's preference towards Hideyoshi, Ieyasu and Masamune make plans to claim the armor.

As the trio stop by Honnouji on the way back, Hideyoshi reads up on her history of her world, in which Mitsuhide betrayed and killed Nobunaga. Overhearing Mitsuhide talking to herself about potentially killing Nobunaga, Masamune tells her to test her bonds first and gives her some supposedly strong sake. That night, Mitsuhide ties up Hideyoshi and offers the sake to Nobunaga until she passes out, before setting the inn she is on fire. Before walking into the flames herself, Hideyoshi breaks free and stands before Mitsuhide, telling her that she should face her feelings before heading inside to search for Nobunaga. As Mitsuhide goes in after her, she finds Nobunaga, who stops her from throwing her life away by reminding her how important she is to her. When Mitsuhide stops breathing as a result of taking in too much smoke, Nobunaga performs CPR on her to bring her back. As Hideyoshi continues to search the burning building, she discovers Masamune attempting to steal the Crimson Armor. As she awakens after being saved by her, Hideyoshi comes to realization that Masamune is actually her teacher. As Masamune escapes with the armor, she is confronted by Ieyasu.

As Nobunaga, Hideyoshi and Akechi catch up to Masamune, they find her already beaten, the armor taken by Ieyasu who is now attacking Nobunaga's castle. As Nobunaga and Akechi head to the castle, Masamune explains to Hideyoshi how she travelled back in time to obtain the Crimson Armor and allow the Date clan to conquer Japan, inadvertedly ending up in the alternate past and bringing Hideyoshi with her. She explains she had encountered a Date clan member from the future, later discovering a jewel that could send her through time and a scroll containing the legend of the Crimson Armor. As Ieyasu sneaks into the castle to try and retrieves the remaining pieces of armor, Masamune warns Hideyoshi that the armor will go out of control if not equipped with the jewel she brought with her. Ieyasu uses her magic to activate the armor, awakening the evil heart inside her.

As Ieyasu becomes possessed by the armor and unleashes her power on the village, Nobunaga asks the other feudal lords for her help in stopping her, with Hideyoshi pushing that they find a way to do it without killing her. Working together, the group combine their attacks to overwhelm Ieyasu, giving Nobunaga the opportunity to break the armor, turning Ieyasu back to normal, albeit with a newfound fondness for Nobunaga.

As Nobunaga begins rebuilding her castle, Masamune finds the Crimson Armor amongst the wreckage and becomes swayed by it. As Masamune pleas that she needs to wear the armor to change the world, Nobunaga tells her how her recent experiences taught her that there is more to being a leader than to rule with power. As her friends stand to fight against her should she try, Nobunaga destroys the armor, saying there is no need for it, bringing Masamune back to her senses. Afterward, Masamune tells Hideyoshi that they need to return to their own time. In the epilogue, Hideyoshi stops in front of the temple and spots a dog who reminds her of Shiro. When she confronts the dog, it is none other than Shiro who is elated to Hideyoshi but he can't play with her because of an important mission he has to complete. Hideyoshi begs him to know what is, so he whispers it to her. But by then, the show has ended.

The Present Day. There's a middle school girl named Hideyoshino who loves fashion and cell phones. Her nickname at school is "Hideyoshi". Just before her exams, she realizes that her only hope is divine intervention, and goes to a shrine. There she is whisked away by a mysterious light...The next thing she knows, she is surrounded by female bandits who proceed to attack her! She is saved by a general with a gigantic sword. The general calls herself Oda Nobunaga...