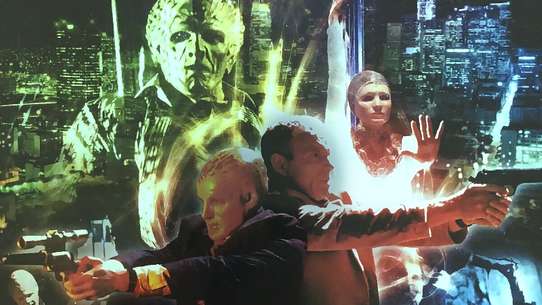 The BEST episodes of Alien Nation

"That was the scene in California's Mojave Desert five years ago - our historic first view of the Newcomers' ship. Theirs was a slave ship, carrying a quarter million beings bred to adapt and labour in any environment. But they'd washed ashore on Earth, with no way to get back to where they came from. And in the last five years, the Newcomers have become the latest addition to the population of Los Angeles... "

George is confronted with his past as a slave on the spaceship, when it appears that an old Russian Roulette style game he was once forced to play has returned. Will George take revenge for his brother, who died being hit by a bolt of salt water while playing the game on the ship?

The method of a serial killer stalking Newcomers re-creates one of their most grisly legends.

George (Eric Pierpoint) goes under cover as a client at a computer-dating service for Newcomers to locate a female Newcomer killer.

George and Sikes (Eric Pierpoint, Gary Graham) search for a Purist radical who has been murdering special Newcomers.

Sikes and George (Gary Graham, Eric Pierpoint) follow the trail of a mysterious Tenctonese box which is deadly for those who fail to comprehend its powers.

When the Francisco family move into a rich suburban part of L.A., they get to experice hate and racism spread by the radical Purists.

While investigating a famous doctor's murder, Sikes and George (Gary Graham, Eric Pierpoint) discover he was attempting to contact a probe seeking the Newcomer slave ship.

George and Sikes (Eric Pierpoint, Gary Graham) discover a Purist plot to sabotage an election while investigating the bombing of a Newcomer voter campaign office.

While investigating a series of mysterious Newcomer deaths, Sikes and George (Gary Graham, Eric Pierpoint) discover a plan to eliminate the Newcomer population with a lethal bacteria.

Sikes and George (Gary Graham, Eric Pierpoint) uncover a prostitution ring after a Newcomer prostitute, on the run from her pimp, is murdered in Sikes' apartment.

George (Eric Pierpoint) searches for the killer of a Newcomer corporate executive (David Selburg) who invented a durable synthetic fabric.

Sikes and George (Gary Graham, Eric Pierpoint) become involved in a federal search for a Newcomer who was programmed to kill while in the quarantine camps.

Sikes (Gary Graham) attempts to prove George (Eric Pierpoint) innocent in a drug case as Susan (Michele Scarabelli) prepares to transfer the pod to her husband.

Sikes (Gary Graham) vows to capture a serial murderer who once eluded him when it appears he has killed again.

During heavy rioting, the precinct is near deserted & Sikes & Francisco must stop criminals who attempt to take the precinct over and raiding the evidence lockers for drugs, money and weaponry.