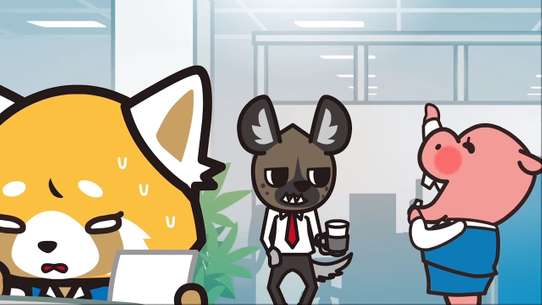 The BEST episodes of Aggressive Retsuko

Series of 100 one-minute anime shorts that centers on Retsuko, a 25-year old red panda who works in her dream company's accounting department. But it turns out that she is forced to keep doing more and more impossible tasks by her superiors and co-workers. She doesn't talk back to them, but she still has to let off steam, so she ends up going to karaoke by herself and singing death metal.

Heinrich fixes everything except Retsuko's computer.

Retsuko and Giselle go out for dessert, but Giselle won't stop taking photos of the ice cream to post online.

Armadonna laments that she and her boyfriend have lost their spark.

Retsuko is mid-conversation with co-workers, when her boss, Buffalo, awkwardly joins in.

Retsuko and Doug try to agree on a restaurant for Zelda's birthday dinner.

#7 - Dear Mother of That Child

Retsuko gets stuck sitting next to an annoying little kid on the subway.

Retsuko has to wait for her boss, Hog, outside with no shade.

To keep him in a good mood, Retsuko has to listen to her boss, Buffalo, rant.

Retsuko goes to a company mixer where there are intimidatingly accomplished and handsome men present.

Hippatricia goes on a diet.

Retsuko invites Zelda over to watch TV, but Zelda gives away all the plot twists.

Beverly leaves work early to get her nails done.

Retsuko's sexist boss, Hog, yells at her for no good reason.

Armadonna laments that she's given up on dating and just wants to look at handsome anime characters.

Retsuko agrees to split the restaurant check, but then her co-workers order more than they said they would.

#19 - The Whereabouts of the Present

Retsuko buys Eaglette a coffee mug for her birthday.

Ape Admin brags about how men are always checking her out.

#24 - Trip to the Convenience Store

Doug is about to go on a food run but won't stop asking Retsuko questions about what to get.

Doug won't stop asking Retsuko questions about how to do his job.