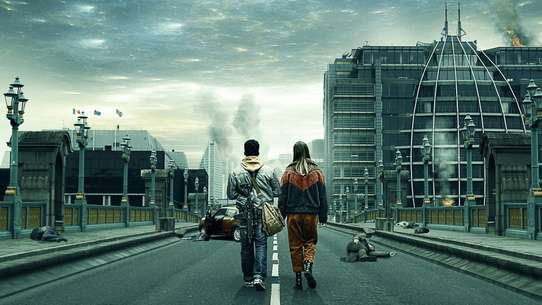 When astronomers detect a transmission from another galaxy, it is definitive proof of intelligent extra-terrestrial life. The world’s population waits for further contact with bated breath. They do not have to wait long. Within days, mankind is all but wiped out by a devastating attack; pockets of humanity are left in an eerily deserted world. As aliens hunt and kill those left alive, the survivors ask a burning question – who are these attackers and why are they hell-bent on our destruction? Emotional, cinematic and rooted in character, it is a unique marriage of human drama and the best science fiction. This is a story of ordinary people in extraordinary circumstances - but they are more than just victims in a brutal war. For, as we will come to realize, the aliens’ savage attack on earth is not arbitrary: its seeds are being sown before our very eyes.

With Adina's plan in motion, the world's last hope is for Bill to make one more journey, risking his own life in search of Catherine's help.

Bill's latest discovery is put in jeopardy, even as trouble brews with the human aliens; Catherine must decide where her loyalties lie.

Adina's plan for world destruction reaching completion; those in the alternate world are under attack.

A deadly face-off leads to a life-threatening moment; Catherine and Sam seek help for his parents.

Emily agrees to help Bill test her for the virus, but soon experiences serious side effects. Sacha, who has secretly followed the group to stay close to Emily, tries to remove her from the group. For their part, Catherine, Sophia and Nathan set out again in search of Bill Ward.

As Adina starts the next stage of her plan, astronauts Juliet and Richard see warning signs in space; uncovering Adina's sinister mission.

Catherine, Sophia, Zoe and the other survivors, finally reunited, prepare for the ultimate attack. But it is Bill who is the only one to hold the fate of humanity in his hands, provided he is helped by Isla.

The survivors make some disarming discoveries not only about the aliens but also about themselves. Mokrani goes on the offensive, taking the fight to the aliens. Ash is forced to make the hardest decision of his life. Chloe's past catches up with her, threatening to rip apart the delicate semblance of normality she is so desperately clinging on to.

When astrophysicists detect a transmission from another galaxy, it is definitive proof of intelligent extra-terrestrial life. The world's population waits for further contact with baited breath. They do not have to wait long. Within days, mankind is all but wiped out; just pockets of humanity are left in an eerily deserted world.

Cracks start to show as the survivors find different ways to cope. Jonathan's increasingly perturbed by Sacha's strange behaviour. Emily proves to be an exciting conundrum for Bill. Mokrani is horrified as his men delight in the opportunity to exact revenge.

At the university, Sophia watches the videos recorded by Dylan, a young man they found dead, while Catherine focuses on the algorithms he left behind and which decipher the behavior of robots. Thanks to Bill's intervention, Isla manages to flee and join her family.

At the Observatory, Mokrani and Catherine clash over the fate to be reserved for Micah, whom Catherine considers to be a major source of information. Micah reveals to Catherine that she has to find Bill Ward. The latter, for his part, tries to find out more about Emily, still assailed by visions of Adina, the leader of the aliens urging him to kill Bill.

Tom grapples with a betrayal and encounters a familiar face; Catherine looks for a solution to the dangers of the black hole.

After the devastating alien attack, disparate pockets of survivors emerge into a shattered world. They quickly realise they must put their differences aside if they are to stand any chance of survival. For they are not alone. Something sinister lurks in the shadows and whatever it is, it won't consider its victory complete until it has killed every last human.

London, four months after the attack. The survivors organize the Resistance. Bill continues his research on aliens and understands that their DNA is human but that their organs are degenerating. In France, a severely wounded dissident alien reaches the Observatory.

Bill joins the military group formed by Ethan, Dominic and Michael. The three men hold a young alien hostage, Isla. Catherine, Sophia and Nathan continue to search for Bill. Adina, and the aliens also set out to find Bill. Chloe accuses the blow when she realizes that Sacha killed Ash. She suggests to her increasingly unstable son to run away with her.

With Richard's help, Catherine discovers she can travel to another world; a new revelation puts Martha's loyalties to the test; Zoe breaks Bill out of prison.

Tragedy strikes, altering the course of the future forever. Catherine's priorities change with the arrival of Sophia. Things come to a head between Jonathan and Sacha. Emily's so happy she can see again that she's stopped asking why, even if others haven't.

As the dust settles on their brave new world, the survivors are forced to face some cold truths. Catherine is stunned to discover the part she played in bringing about the alien attack. Helen becomes fixated on revenge. Emily momentarily regains her sight.

Catherine, Sophia and Nathan make their way to London, accompanied by Victor, a survivor encountered by chance. Along the way, the dangers multiply. Sacha's feelings towards Emily intensify and the young man's behavior becomes more and more disturbing. Feeling threatened, Bill is forced to flee.

Mokrani and Catherine are preparing to fight their lives. Emily looks for answers to her many questions, even if she knows that the consequences of the truth could come to light. Sacha's visions continue, projecting a confusing image of the future.

Without telling Emily or her parents anything, Bill decides with Zoe to test on Emily the biological weapon he hopes to be able to use against the aliens. Catherine, for her part, has had difficulty managing her grief since Mokrani's death. She now has only one thing on her mind: to find out who Bill Ward is and find him. Sophia is ready to help him, but Nathan hesitates.