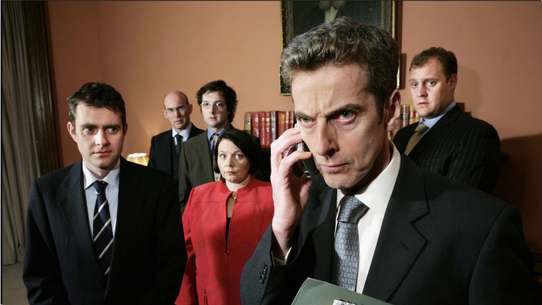 The BEST episodes of The Thick of It

The Thick of It is a British comedy television series that satirises the inner workings of modern British government. It was first broadcast in 2005, initially with a small cast focussing on a government minister, his advisers and their spin-doctor. The cast was significantly expanded to coincide with Christmas and Gordon Brown's appointment as prime minister in 2007, which saw a number of new characters forming the opposition party. These characters continued for its third series in 2009, and the fourth and final series about a coalition government was broadcast in Autumn 2012.

Someone sends an email they shouldn't have, while Hugh lies to a Select Committee...

The government, the opposition and the civil service all have a lot of questions to answer about the suicide of a nurse after his flat was sold off. They must now come before an inquiry into the scandal which has engulfed all corners of politics. Lord Goolding is reputedly a fair man, but he is not going to stand for any nonsense and neither is his team of expert inquisitors, so surely now the truth will come out. Unless someone lies, or creates a diversion of some kind, or simply pretends not to remember anything. Which they obviously would never do.

With Nicola Murray and Peter Mannion on the back foot after the unravelling of the key worker housing sell-off policy, both government and opposition scramble for the moral high ground while the dirty floodwater of scandal laps around their toes. Several people are even calling for some sort of inquiry. Everyone wants to spin their own version of the story, by fair means or foul. But with more fingers being pointed, the scandal gets even bigger, threatening to implicate everybody. Meanwhile, in amongst it all, the department is trying to somehow launch the new Carers Pass.

Stewart Pearson is running 'Thought Camp' at a remote country house hotel, as the perfect way to re-engage the party with the creative cloudscape. No phones, no iPads. Peter Mannion can definitely think of better ways of spending the Easter weekend than 'imagineering' with Stewart, Emma and a bunch of back-benchers and party workers. Meanwhile, Phil is surprised to find the ministerial offices less than deserted. Glenn is there, working on the Fourth Sector backlog. Fergus and his advisor Adam are meeting with a young, attractive economist who wants to start a bank. Then all political hell is let loose when an unexpected and tragic news story breaks.

An empty London flat threatens the future of a potential Housing Bill. Dan Miller is getting plenty of media-attention for his work on the bill, which is creating a degree of envy.

Reshuffle day at Number 10. When the job at the Department of Social Affairs and Citizenship is turned down by everybody else, there is no option but to promote unknown quantity Nicola Murry to the Cabinet. The downside is she is very keen, has a husband who works for a company that has government contracts, has an 11-year-old about to go to a private school and is about to face the media at a crucial by-election poster launch. Something will have to be done.

The final reckoning. Every dog has its day, but as the fallout from the inquiry starts to take its toll, the everyday problems of government continue unabated. Despite the fact that no-one is actually talking to each other any more. The Home Office have cut police numbers, created a huge backlog of arrest paperwork, and managed to blame DoSAC for the enormous queues at police stations. At Malcolm's suggestion, Dan Miller gets sent on a fact-finding mission to the local cop-shop to press the flesh, in the belief that it will make the government look unresponsive. Or does he have another motive?

With Nicola safely on a train to attend the party's Here 2 Hear event in far-flung Bradford, Malcolm is free to launch his latest plot against the leader of the opposition. But Olly will find it difficult to help, given that he's in St Thomas' Hospital with a burst appendix, and Ben Swain will want more than a bar of chocolate for playing along with the scheme. When Nicola finds out what's going on, she has to try to control the situation from a seat in standard class, right under the watchful eye of a 24-hour news channel. Is she sitting on the fast train to Nowheresville, West Yorkshire?

Nicola Murray and her team are desperate to find a major sports personality to be the face of DoSAC's new Healthy Choices campaign. Malcolm's away on holiday and doesn't want to be disturbed, so they take advice from Steve Fleming, who's back on the scene as the PM's new fixer. Is Steve really as nice as he seems? Everyone knows Malcolm never takes holidays, so what's he up to now?

As the election looms and the Opposition eye the prize, the word around the Westminster Village is that Malcolm Tucker is running out of both options and friends. He may have bitten off more than he can chew with Steve Fleming, but when an offer of help appears from an unlikely direction, Malcolm starts to set his finest trap yet.

With the Prime Minister away at a summit in Spain, Malcolm Tucker is left at home to mind the shop. Just as Nicola Murray is about to launch her Fourth Sector Initiative to the media, the media decide that what they really want is someone to launch another leadership contest. Does Nicola have what it takes and, if she does, can Malcolm take it away from her before she does any damage?

Nicola Murray is stuck in an Eastbourne hotel bedroom with nothing but a laptop, a printer and a tiny kettle while she and Olly try to finish her speech for the annual party conference. It's not going well. But Glenn has brought in his secret weapon - Julie Price, tragic widow, people's champion and regional photo opportunity. Is this the breakthrough they need, or the start of a tug-of-Julie with Malcolm Tucker?

Something goes terribly wrong at a ministerial visit to a factory – only Malcolm can help, but will he?

After weeks of trading bitter blows in the press, DoSAC minister Nicola Murray MP and her shadow Peter Mannion MP are invited onto BBC Radio 5Live for a debate on Richard Bacon's late-night phone-in programme. Director of communications Malcolm Tucker and opposition PR guru Stewart Pearson decide to listen in the comfort of their respective offices, but when some breaking news threatens to make things difficult for the politicians, the programme quickly turns into a phone-in like no other. Malcolm and Stewart are left no choice but to start getting their people over to the studios.

Nicola Murray MP has only been secretary of state for just over a week, but already there is press speculation on how long she will last. And now someone at the Department of Social Affairs and Citizenship has completely wiped the immigration records of 170,672 people. Who's going to get the blame, who will have to break the news to Malcolm and how will Nicola get through lunch with the staff of the Guardian without revealing the scale of the latest disaster?

With Glenn gone, Nicola Murray is busy breaking in her new policy advisor, Helen Hatley. When Helen is accidentally photographed holding notes from an ideas meeting, Nicola is understandably angry. Of course, Nicola is already stressed by having an eight foot pork chop following her about, whilst simultaneously being attacked by the rest of her party for endorsing an unpopular policy. Even worse, her rival Dan Miller seems to be getting on very well with Malcolm Tucker.

There's a reshuffle in the offing and the PM's new 'blue skies' advisor is making trouble...

Hugh Abbot is the Minister for Social Affairs and he's facing a policy crisis; his 'Snooper Squad' idea has been vetoed which leaves him with just forty minutes to come up with a new policy.

Peter Mannion, the Secretary of State for Social Affairs, is told to launch his coalition partner Fergus's new 'Networked Nation' policy at a school. Peter doesn't even know how to right-click a mouse and would rather be celebrating his wedding anniversary, but Stewart Pearson won't hear otherwise. So Fergus is left in charge of drawing up a list of staff redundancies, and Terri Coverley is pretty sure she can make Fergus's hit list if she works hard at under-performing, and finds help from an unexpected direction. Peter's policy launch is a disaster, and the disaster recovery plan is even more of a disaster.

The civil servants at DoSAC are preparing for a visit from the DoSAC shadow minister Peter Mannion. For Mannion and his team, this informal pre-election briefing is a good opportunity to measure up for new curtains. For Terri Coverley, this principally means putting on a bit more make-up. For Nicola Murray, it is simply another distraction on a day when nothing seems to be going right. All she really wants to do is get Glenn and Olly to kick-start the Fourth Sector Pathfinder Initiative. And then she gets a call.

Hugh enlists the help of a focus group to help him make a decision between two policies.