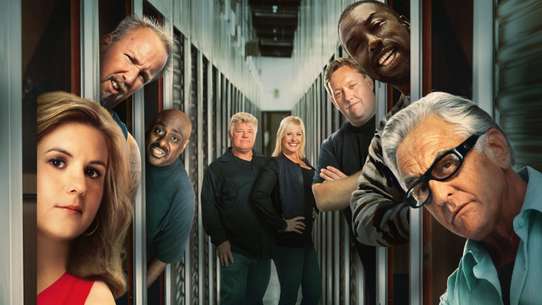 The BEST episodes of Storage Wars

A&E presents the new original real-life series "Storage Wars," which follows professional buyers and their teams as they scour repossessed storage units in search of hidden treasure. Part gamblers, part detectives, these auction pros have found everything from coffins to the world's most valuable comic book collection, paying as little as ten dollars for items valued in the millions. Each episode of "Storage Wars" follows a group of bidders as they get a quick peek inside the units, aided only by the beam of a flashlight. They then must assess on the spot if the unit is worth a bid and how high they will actually go to grasp the gold. The high-stakes fun begins as we see if the resulting buy is full of mostly trash... or true treasure. Driven by Dan Dotson, one of the most successful and outrageous auctioneers in the country, the cast of buyers is as colorful and varied as the treasures they uncover.

Rumors run wild in Orange, California when 6 lockers--owned by one tenant--go up for auction. Dave and Darrell vie for a unit with a 12 grand payday. Barry Weiss stumbles across a vintage magazine. One buyer nearly breaks a hip. And Jarrod is forced to ask Dave Hester for an appraisal. The question remains, who was this previous tenant? An antique dealer? A local business owner? Or perhaps something worse?

#2 - Portrait of the Gambler

The buyers return to Montebello, CA. Previously Jarrod and Brandi lost money, and an employee. Will their luck turn around? Dave Hester finds some marketing Americana. Barry buys a sweet unit. And Darrell Sheets stumbles onto what may be the biggest find in Storage Wars history!

The buyers head to the wealthy beach neighborhood of Westminster, CA. Darrell brings his bravado and a wad of cash, and leaves with both of them intact. Dave finds classic car parts, Brandi goes rogue with a giant-priced locker, and Jarrod is more than skeptical. Meanwhile, Barry finds an antique medical device and brings another antique to appraise it. But will the doctor be in?

A storm is brewing in Whittier, California. When it rains in the auction business, only the best bidders come out to play. Darrell Sheets tries to bat down his competition when a locker with a twenty-seven thousand dollar payoff opens up, Dave Hester bids on a unit with a stockpile of antiques, and Barry Weiss lands himself a locker previously owned by a man with an... antique weapons fetish.

In Riverside, Jarrod and Barry are greeted by a mob of eager newbies. With their financial futures at stake, the buyers must choose to fight or befriend the crowd. Barry Weiss buys a "mystery trunk." Jarrod and Brandi battle for a unit filled with household goods and classic signs. And Darrell Sheets finds a box of turn-of-the-century books. If these books are valuable Darrell could make thousands. If they're not, he'll be just another victim of the mob.

The buyers head out to rainy San Jacinto, CA. Darrell Sheets discovers something that is music to his ears. Brandi and Jarrod find they need to team up with Barry if they want to make any money. And Nabila Haniss tries to expand her territory, but will she score...or strike out?

The third season begins at the crack of dawn in La Verne, CA, and finds "The Collector" in training. Dave Hester enjoys bidding, and bidding people up. Darrell Sheets shows up alone and quickly detects a find of his own. And Jarrod and Brandi start the new season with a system...but will it help them find zen?

The buyers return to Long Beach, CA. Jarrod and Brandi have never done well here, so will their luck change? Darrell Sheets finally gets some exercise in Long Beach, buying for the first time and "wiggling" his way into the black. Barry Weiss laps the rest, finding a very unique kind of race car. And Dave Hester goes all out for a unit that hasn't been opened in 20 years. But when the dust settles will he find hidden treasures, or a big bust?

Trouble comes to Mission Hills, California when a mysterious new bidder aims to dominate the competition. Darrell fights for a drum set, Jarrod and Brandi face a three thousand dollar loss, and heavy-bidder Dave Hester is pushed to his limit in a duel with his new nemesis. From light shows to peep shows, could this be the day the Mogul loses his crown?

Tempers flare! The buyers attack! In Yucaipa, California Darrell Sheets crosses the line with a stab at Dave Hester's Newport Consignment Store. Brandi and Jarrod argue over the worth of a bizarre looking horse head. Barry Weiss bids on a locker littered with antique furniture. And Dave Hester makes his strangest discovery ever! But when all is said and done, will Darrell get the better of Dave? Or will the Mogul overcome the Gambler's antics?

The buyers square off in Costa Mesa, California. Dave's estranged brother surfaces and challenges the Mogul over a unit filled with rock memorabilia. Barry uncovers a wooden rendering of a head (and refrains from making tasteless jokes). And Darrell vies with Jarrod for a century-old slide projector. From antiques to bad blood, personal items from the past are about to dictate these buyers' futures.

The buyers blow into Santa Ana, CA. Barry Weiss climbs aboard the buying express. Dave Hester may have trouble leaving the station. And one buyer finds something that s got magic written all over it. From train sets to talking trash, it s another auction show down in Santa Ana.

The buyers meet up in La Habra, CA and run into "The King of Palmdale." Ivy Calvin, a former ultimate fighter gets into the ring and quickly goes toe to toe with Darrell. Jarrod and Brandi buy, and meet a nerd. And Barry Weiss hits the links with a famous golfing buddy.

The buyers head to Harbor City, CA. Jarrod and Brandi get back to the business of buying. Dave Hester "Yups" his game as Nabila Haniss tries to bid the circus out of town. Barry Weiss looks like a hobo, and acts like a hobo, but buys like a pro. And Darrell Sheets goes big on the manliest of lockers, but will his unit hit the bullseye...or did Darrell totally blow it?

The buyers invade the best little city in the USA, Azusa, California. Darrell Sheets sees past the competition, by winning a timeless unit. Jarrod and Brandi continue their journey of quality over quantity, but hope that one item doesn't stain their momentum. And Barry Weiss' buying judgment comes into question, as he starts to wonder himself whether he can pull a rabbit out of his hat...one more time.

A record-breaking 100 vault auction brings extra buyers to Chatsworth, CA. Darrell Sheets gets Mark Balelo to bite on a big group of vaults, and their contents lead to an explosive situation. Herb and Mike steal some vaults that might make them storage kings. And Barry Weiss finds some antiques, but will grandma's stash lead to big cash?

The heat is on as the buyers return to the high desert, and a lot has changed. In this episode, Darrell Sheets finds a macabre oddity, Dave Hester discovers an antique toy, and Barry Weiss asks one of his buddies from Aerosmith (no big deal) for an appraisal. When the smoke clears and the dust settles, who will be left standing as the competition comes full circle?

The buyers head back to Ontario, CA and if people didn't notice Dave Hester before, they won't have any trouble now. Jarrod Schulz reverts to his previous ways, overpaying on some toys that make it hard for him to break even. Darrell Sheets has a brush with "The Man," and Barry Weiss has a brush with his own mortality. From Goddesses to Warlords, Ontario is anything but boring.

When auctioneer Dan Dotson calls in sick, his wife Laura is forced to take the reins. But with a crowd of unenthusiastic buyers, Laura will have to pull out all the stops to sell these lockers. Barry finds a "knock out" unit, Dave goes after an electronics locker, Jarrod tries to up his street cred with a "gangsta" unit, and Darrell uncovers a classic movie prop. Will Laura's unbridled enthusiasm pull in big bucks from the buyers or will she end up letting down her auctioneer hubby?

The buyers journey eastward to the city of sin for a marathon of auctions. But with a 300 mile haul between them and their stores, the rules of the game have changed. Now on a level playing field, Jarrod fires back at the big dogs. Dave Hester rolls up his sleeves with an “earthy” find. And Darrell Sheets bids on a unit with some golden potential. Away from home without their teams, the buyers will find out who has the skills and who’s just plain lucky.

The buyers head back to Santa Ana, California and the reunion is anything but fruitful. Jarrod and Brandi quickly see their profits roll away, Barry becomes an organ donor, Dave proves that sometimes not making a deal is good common sense, and believe it or not, Darrell's hopes for a Santa Ana upside rest in the balance of a coin toss... scout's honor.

It's nine stories of treasures in Koreatown and the Vegas Ladies discover that one of them has some Texas flair. Kenny lucks out looking for lady stuff and Mary gets the spring back in her step.

The buyers venture into Downtown, Los Angeles, where they find themselves in a new kind of auction, called a vault auction. It's pallets and crates instead of lockers, and Darrell Sheets thinks it's a perfect place for a showdown with Dave Hester. Jarrod and Brandi put all their marbles in some mystery boxes. And Barry Weiss flexes his auction muscles, which leads to memorable trip to Venice Beach.

In Hawaiian Gardens, Darrell breaks in the new guy. Brandi and Jarrod detect something mysterious in their unit and Justin paws his way through a decent locker.

The buyers invade the quiet town of Simi Valley, CA. Darrell and Brandon smoke the competition. Jarrod and Brandi find some safes, "release the Kraken," and walk away with literally a pirate's booty. Dave Hester again breaks down the competition but in the end it's his heart that is left broken. And Barry Weiss rides in on a vintage motorcycle, but will he drive off into the sunset the big winner... or with an empty backpack?