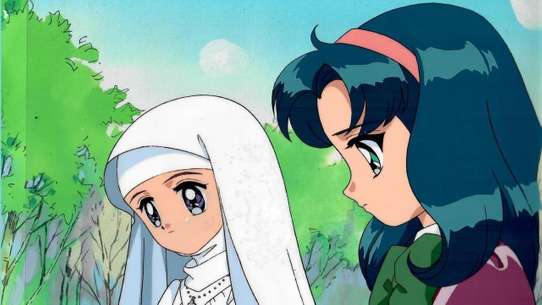 The BEST episodes of Saint Tail

Every episode of Saint Tail ever, ranked from best to worst by thousands of votes from fans of the show. The best episodes of Saint Tail!

The story of Saint Tail follows a simple formula: school girl Meimi Haneoka transforms into the mysterious thief Saint Tail, and steals back what was stolen or taken dishonestly. She's assisted by a classmate and sister-in-training, Seira Mimori, whose position in the church after school each day allows her to hear the troubles of those who have been wronged and have come to pray to God. While Saint Tail steals to right the wrongs done to innocent people, she's a thief to the police force. Her classmate Daiki Asuka Jr., called Asuka Jr., and son of Detective Asuka, is hot on her trail. Saint Tail delivers notices of her planned capers to Asuka Jr., to give him a fair chance to catch her.

To stop a forced wedding, Saint Tail must steal a wedding veil.

Meimi plans to buy a hedgehog pet, only to have it purchased by someone with a devious plot for the animal.

A notice by Saint Tail to Asuka Jr. starts rumors of the two working together.

#8 - The Cutest Little Thief! She Will Steal Your Heart!

A string of thefts convinces Asuka Jr. that Saint Tail is behind them.

Proof of a popular idol girl's relationship is in the hands of a rival. She must give up an acting job or the locket will be show to the media, unless Saint Tail steals it first.

Asuka Jr. has been missing, and Meimi fears he's been kidnapped. From his place of captivity, Asuka Jr. tries to fathom why Meimi hid her identity of Saint Tail. Meimi prepares to save Asuka Jr. at any cost.

Rina tries to convince her uncle, the mayor, that Asuka Jr. has no plans on actually catching Saint Tail. The mayor gives Asuka Jr. one last chance: guard an expensive crystal swan sculpture on loan from another city.

Asuka Jr. follows after the stolen swan, only to find himself in the middle of a larger plot. When the two are locked in a room together, Asuka Jr. and Saint Tail must compromise to get the sculpture back before it's sold overseas.

Sawatari takes a photo of Meimi playing with her hedgehog, Ruby, outside. Upon seeing the photo, Asuka Jr. recognizes the pet from an early encounter with Saint Tail, leading him to demand answers from Meimi.

A thief hopes to make amends for his past mistakes, but may return to a life of crime unless Saint Tail arrives first.

A marathon runner's efforts are being sabotaged. Her only chance to win is if Saint Tail steals back her stolen custom shoes.

#16 - A Swordswoman's Wish! To Seal the Excellent Sword

A wonderful blade is won through cheating, and Meimi vows to steal it back. Saint Tail encounters another thief, Mouse, who's been stealing swords.

A horse has been taken, and is on a train to leave town. Saint Tail must take back the horse while avoiding Asuka Jr. on the train.

A gardener's only wish is to see a tree he healed be spared. With magic on her side, Saint Tail sets out to steal back the "Tree of Happiness".

#19 - A Precious Creature of Nature: Save the Beautiful Butterfly!

Rare butterflies are illegally captured. After receiving a notice from Saint Tail, Asuka Jr. sets out to discover their hidden location before the thief arrives to take them.

#20 - Phantasmal Masterpiece! A Woman Detective is Back

A detective returns to Japan to restore her family's honor, even if it means stealing. Saint Tail plans to find the painting to steal, herself.

#21 - A Burst of Laughter! The Detective Team Does a Great Job

Classmates Kyoko and Ryoko form a detective team to capture Saint Tail before Asuka Jr. can. They enlist Meimi as a member, and expect her to show up at Saint Tail's next caper.

Meimi and Asuka Jr. spend time together at an aquarium, where they encounter a white dolphin meant to be free.

The secret behind Meimi's mother's past is revealed. Meimi hopes to steal back a jewel to close the final chapter on her mother's past life of crime.

A young fortune teller, Maju, uses her power to steal from her visitors. Saint Tail must retrieve the stolen statue, but if Asuka Jr. meets with Maju, Meimi's identity could be revealed.

Rumors are going around that Saint Tail has been stealing countless items. Asuka Jr. holds faith in Saint Tail, but Meimi knows she must take action to clear her name quickly.