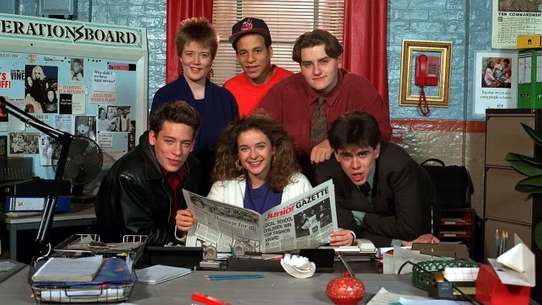 The BEST episodes of Press Gang

Every episode of Press Gang ever, ranked from best to worst by thousands of votes from fans of the show. The best episodes of Press Gang!

Press Gang was a teen programme that followed the trials and tribulations of a group of teens setting up and running a young people's newspaper "The Junior Gazette". Egos clash, professional and personal feelings collide and lots of one-liners and "crazy" situations made this every teenage-plus person's top of the list viewing. Shown as a prime time children's programme it was actually ahead of it's time socially. With mature and occasionally controversial storylines it shaped a lot of it's viewers minds those few precious years.

The new recruit, Judy Wellman, seems to go down very well with the lads but unbeknown to them she's only got her eyes set on one, Colin. But is it a case of opposites attract for him? Kenny receives an anonymous letter which contains some strange facts.

Spike is in trouble with the head when he hits another student, but he won't let anyone help him. Frazz discovers Colin's little plan that involves him as his pawn in his newest venture. Kenny suffers a broken heart when a girl rejects his advances.

The local leisure complex is being threatened with closure and The Junior Gazette come up with a great campaign to save it, or so they originally thought. The facts are wrong and the team are forced to write another edition of the paper. Much to Lynda's delight as she uses her own initiative to back the council into a corner. Does she succeed in getting the whole story and revealing the true facts.

Lynda and Spike go on their first date - a cocktail party for the paper's owner. But Lynda's fears of a social event may be a problem - not to mention a surprise visit from an Arab trying to sell the oilfields under the school.

Colin thinks he has worked out Cindy's secret, but what can he do about it? Lynda convinces him to confide in her, as she is concerned that Colin's melancholia may affect the paper's finances, and helps Colin find a way of addressing the terrible issue at hand.

The Staff of the Junior Gazette are held hostage by a gun man, from the local gun club when they print an article wanting gun's banned, everyone co-operates except a stuborn Linda, as the story unfolds it's clear one of the staff has been killed, but who?

The paper swings into action for coverage when they hear that a local record store has been brought down by a huge explosion. The staff all go flat out for coverage... but where's Spike? Actually, he's buried under the rubble, listening to the voice of an injured girl it turns out he knows but has never really noticed...

While sleeping in the newsroom, Mr Sullivan appears as Lynda's guardian angel. In the style of It's a Wonderful Life, he takes her on a journey into the future to see what becomes of some of the major characters when she is not around. Sarah is a war correspondent, Frazz a radio agony uncle, and Julie has taken over as editor.

Spike's got something to say to his dad, but Colin's got other ideas - he's handcuffed a suitcase to him.

The owner of the Junior Gazette has died and the gang are forced to review their situation. Colin has the future of the gazette on his shoulders as he is made the head editor. Lynda and Spike appear unexpectedly on a kid's TV show - with explosive results.

The future of the Junior Gazette is uncertain. As the staffers on the paper are finishing school, the owners want to turn the paper over the the next lot of kids. The Junior Gazette was meant to be a school newspaper, but Lynda and Kenny want to run the paper commercially, employing any staff that wish to remain. They draw up a proposal and submit this to the paper's owners. Colin has groomed Kenny for rock stardom, but his big concert is the same night as the proposal. Spike expresses his feelings for Lynda, but does Lynda feel the same way for Spike? Can she bring herself to say those three little words that Spike wants to hear? Spike threatens to go back to America - but can Lynda decide between Spike and her paper?

A pop star has been stranded at the train station and Lynda knows that it would make front page news at The Junior Gazette. Her only chance is to ask Sarah, but Sarah isn't feeling to good about herself. Lynda's desperate for the scoop and goes to lengthly measures to make sure it happens. Leaving poor Sarah questioning herself emotionally.

Kenny keeps getting a mis-routed line when phoning his aunt in Glasgow and strikes up a friendship with a girl in Dublin. Raymond Adams (Atlay Lawrence), a local amateur actor that Sam fancies, sets his sights on a nervous Sarah, who is about to publish her scathing review of his performance in An Inspector Calls. Matt Kerr has decided that Lynda should go with Spike to an important cocktail party hosted by the owner of the newspaper.

A Creepy statue gives Linda nightmares and determined to work out why, she and Kenny delve into there childhoods, to discover a broken promise to an old lady is the key. Meanwhile Spike is being stalked by a girl Colin wants to date

Lynda's absent from the newsroom, Colin has got his sights on the editors job and plans to run it HIS way. Can Spike convince depressed Lynda to return to The Junior Gazette and save them from going down the toilet?

A young girl called Cindy makes trouble for Colin, yet she seems to like Colin and his crazy ideas. But she never wants to go home and shies away from being touched. What is her secret? Meanwhile, Lynda and Spike are going to extreme lengths to hide their relationship from the newsteam, when all at the Junior Gazette are aware of their relationship. Tiddler even re-names her 'productive' pair of rabbits, Henry and George, Lynda and Spike.

With the staff being realeased one by one, until only Linda and Spike remain, Sarah finally tells the police the whole story as they attend the funneral of a Junior Gazette member

In a parody of Stakeout, Colin goes undercover as a hotel workman so that Frazz can photograph actor John Hartwood through the window. Protective of his privacy, Hartwood tries to get his minder to make him leave. However, he is still in the room when the actor's girlfriend, Judy Wellman, who Colin had dated in "Chance is a Fine Thing", turns up. A lady called Katherine Hill visits Lynda in the newsroom, and they realise that they share many mannerisms.

The Junior Gazette is now a fully fledged commercial business. Sam has gone and so has Spike, who has returned to America. Lynda is having obvious problems coping with him not being there. By chance an invesitgation into the corruptional dealings with the local council leads to a chain reation and a surprise visit from Spike... and a mystery girl.

Kenny continues to pursue the girl in order to solve the mystery, but Lynda needs him back at the Junior Gazette. She is eventually forced to take on Spike as her assistant for the day much to her un-delight. Kenny's mystery provokes the teams biggest under cover operation campaign yet, just what is going on?

Kenny investigates a mysterious girl called Jenny, who draws chalk outlines on the pavement outside the Highpoint Flats. He soon finds himself in hot water after finding out more then he intended to...

School, life, The Junior Gazette it all seems to be going perfect, everythings going the way you want it to. Then something happens and the next day getting out of bed is the worst thing you could have done. Are Lynda, Spike, Kenny, Tiddler caught in some weird surreal dream or is life really like this?!

Sarah contemplates her future with the Junior Gazette. Should she stay or should she go? But how will the rest of them handle her decision

Is it last day of The Junior Gazette? The gang recollect their thoughts and feelings as Lynda hands them all some sane advice, including Spike.