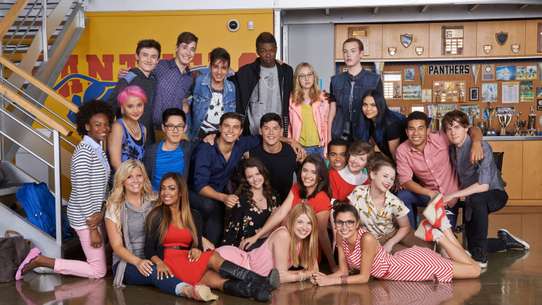 The BEST episodes of Degrassi

Every episode of Degrassi ever, ranked from best to worst by thousands of votes from fans of the show. The best episodes of Degrassi!

After winning tickets for a trip to Vegas at a fundraiser, a bunch of the Degrassi kids take off on a spring break adventure that none of them will soon forget.

the seniors get ready for graduation.

the seniors celebrate their prom and Fiona is in a partying mood. Meanwhile, Marisol wants her dreams of romance to come true; and Eli seeks forgiveness.

Clare writes an article, to the chagrin of Dallas, and others at school. Tori, Tristan, and Dave enter a talent competition. Drew and Bianca's relationship.

Campbell feels he is letting his hockey team down, and decides to fake sick to miss a practice, and be with Maya. The team finds out he was singing karaoke, and Dallas makes him skate until he collapses. K.C.'s father is out of prison, and is showing that he has changed himself, getting a job, and flirting with K.C.'s mother again. Fiona's loft is a mess, both she and Drew blame each other.

The Degrassi students return from a summer of activities a week before the new school year. Jake and Clare are still not talking, and their parents wedding sends Jake looking for space away from Clare. Katie is concerned that Bianca has been spending too much time with Drew, and Alli returns to Dave to find out he has cheated on her. Jake invites Katie, Drew, Marisol, and Alli to his remote cabin for a summer ending event, when Clare finds out, Bianca agrees to drive her. Clare arrives to find Alli kissing Jake, and runs into the woods, Jake and Drew follow, but Eli finds her first. Marisol freaks out when strange things start to happen, and Bianca keeps making references to horror movies. Marisol and Katie decide to relax with some weed Marisol found in the couch, but the two become paranoid in a shed. When repairing Clare's wound, Jake admits he still has feelings to her, the night ends with Clare and Jake's parents checking in on the party. The following morning Clare and Alli separate as friends, Katie becomes more comfortable with Bianca around, and Clare's and Jake's flirtation returns.

Eli receives opposition to the play. Tristan realizes his on-stage kiss, will be his first with a guy. Becky thinks about Adam.

Darcy's online world spirals out of control as she desperately seeks to be wanted and she'll do anything--including posting more risque pictures. However Darcy gets a big shock when her online world crashes into her real life one. Meanwhile Ellie tries to deal with more mature topics, like sex, at college and gets some tips from Ashley. But will they work?

Drew tries to win back Bianca, by entering the academic wiz team, but his concussion symptoms are revealed. Drew explains his MMA past to his mother, and tackles a shoplifter at the mall, not helping his situation, but winning back Bianca. Eli and Becky continue to clash while casting Romeo and Juliet, when Becky labels Tristan as "confused", Eli changes the two leads to homosexual males. Tristan tells Campbell he was posing as Maya, causing Campbell to become angry at both of them.

Emma can't get over Sean and Peter stands by helplessly watching his girlfriend fall for another guy. Peter and Sean want to know which of them she wants more, so they take to the streets for a race that ends with disasterous results. Meanwhile Ellie faces the harsh realities of dorm life and decides to do something about it.

Jimmy's new goals include being a successful coach for the girls basketball team, and pursuing an intimate relationship with Ashley. Meanwhile, cheer leading captain Darcy clashes with choreographer Manny.

Jay goes to an unlikely person to get help for Sean. Ellie catches the attention of the editor after she submits an article for the university paper, but is it just her writing that he likes?

Emma is at a hotel waiting for Jordan, an enviornmentalist whom she met on the internet. After waiting in the hotel lobby, his ""teacher"" greets Emma and invites her up to his hotel room, saying that the person Emma is supposed to meet should be coming soon. Emma soon discovers that the teacher is the boy she met on the Internet. She freaks out and attempts to leave, but he stops her so she scurries into the bathroom. The teacher tells Emma that he is leaving, but it is actually a trick. He has a video camera, and plans on taping himself raping Emma. Toby, J.T., and Manny dash to the reunion and tell Spike and Mr. Simpson about the whole situation and how Emma is in danger. They hurry to the hotel room and rescue Emma before anything extremely dangerous happens. In the end, though somewhat disturbed, Emma learns her lesson and the bond between her and Spike grows even closer.

Campbell continues to consider his hockey performance, and when he plays right wing, he becomes a hockey star. The attention overwhelms him, and he begins to consider self harm and leaving hockey, Campbell does both by jumping off a catwalk. K.C. realizes that his father is a bad influence on his mother, and when he shows up at their home drunk, K.C. and his mother decide to move to Vancouver. Drew teaches Fiona to be humble, and how to clean.

The second part of the season premiere, with great performances by new main stars and guest stars. When Craig got home, he discovers that his father has been rumaging through his dark room, viewing all the photos that he has taken of Joey and Angela. This led to his father beating him, resulting in the destruction of Craig's camera. The next day, Craig's father apologizes and offers Craig a few thousand dollars for a new digital camera. Later, Craig takes Angela off of Emma's hands to the park, but Craig surprisingly asks Angela to go to British Columbia with him, with the money that his father gave him for a camera. Joey finds out about this, and is angered, finally telling him to stay away from his daughter. When Craig arrived home, his father receives the news earlier in the day, and chases after Craig, ready to beat him. Successfully, Craig jumps out of his window, and meats up with Sean, thinking whether to leave to British Columbia. When he played chicken with a train, he runs of

Darcy is tired of her good girl status and strives for something more exciting and when Peter introduces her to an online admirer through her Myroompage, Darcy gets more than she expected. Meanwhile, Trying to move on from Liberty's grasp, JT finds himself interested in the new girl, Mia.

Imogen designs an intricate and expensive set for the school play, and asks her mother, who she despises, for money. Fiona meets Imogen's father, who has problems remembering things, like driving over the family dog. Katie likes Jake, but is convinced it is not mutual, instead Dallas catches her eye. Becky tries to interfere with the play's ticket sales, by asking for donations to less fortunate.

Jenna meets Becky, and she invites Jenna to her home, without mentioning the Christian group there to meet her. Becky pursues a relationship with Jenna, but it is Becky's attractive brother, Luke, that Jenna is most invested in. Clare receives advise from her mentor, but when she turns down Connor's, he publicly posts her comments on Twitter. Drew finds schoolwork difficult, with his concussion, but a job at the mall seems natural.

Imogen is over stressed, with losing her dog, Eli pressing to complete the set, and a relationship with Fiona, she decides to skip school to take care of her father. Imogen's father's health worsens, and Imogen finds out he has dementia, she then decides to let her mother be a part of their life, and returns to school. Jake admits he likes Katie, and the two start dating, Dallas trashes their garden. Becky feels bad for upstaging Adam's ticket sales, and retreats, finding out he has a heart, before finding out he is transgender.

Clare's mentor apologizes for the night before, and she only confides in Alli. He sexually harasses her again, but because he reported that she was in love with him, Clare has no proof, and she decides to suffer alone. K.C.'s mother and teacher are both interested in each other, but the night ends with the news that K.C.'s father will be released from prison early. Maya has another date with Campbell, but she starts to appear interested in him becuase he is an athlete, they talk, and share a kiss.

Marco finally accepts that Dylan is gone and starts to socialize. Spinner seems to be doing himself in before his illness has a chance to.

Zoë's trial winds down with some secrets from her past being exposed by the press. Becky continues to struggle with her testimony.

Conclusion. Zoë gets drunk at a party and rumors circulate about what happened. This prompts Beck to do a story on DTV about teenage girls and alcohol, but then she finds a video of Zoë and two unidentifiable guys and digs deeper.

Eli realizes Clare is keeping a secret from him. Drew's mother wants him to return to Degrassi. Dave considers his relationship with Alli.

KC begins to question his relationship with Coach Carson.