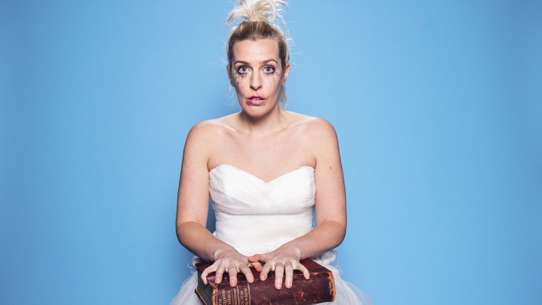 The BEST episodes of Out of Her Mind

Factually-inspired comedy about family, sex and relationships. Sara Pascoe doesn't know why everyone else in the world is pairing up and having babies and sets out on a mission to understand them. She tries to prove that romantic love is mere chemicals and conditioning and doesn't deserve our respect. This conflicts a little with preparations for her sister's wedding, and her best friend's first pregnancy.

Sara’s father, Lewis, is back, forcing her to re-examine all her important male relationships. She tries to dig deeper into why Lewis and her fiancé both left her.

Sara dials up the drama on Lucy and Stefan’s wedding day to distract from her own fears, which are only chemicals after all.

Sara is persuaded to go on a date, Carol is happily back with her awful ex, Sara tries to repair the damage she did to Marie.

Sara decides to face up to her sadness about the past and bravely attempts to return her unused but tattered wedding dress to the shop where Craig jilted her 15 years ago.

Sara organises a baby show for Scoopy to prove she doesn't make everything about her and is visited by a ghostly reminder of her own pregnancy.

Sara struggles to congratulate her sister Lucy on her engagement. That's because love is just the result of hormones and neurotransmitters - nothing to do with her being dumped.