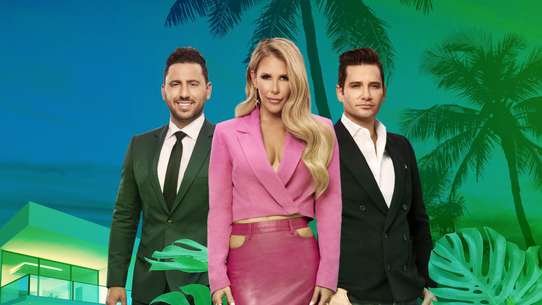 Follows the lives of property brokers in Los Angeles.

Married agents Dia and Ray wheel and deal in an effort to sell the Hollywood abode of a homeowner who plans to leave the country. In Malibu, slick Scotty Brown tries to market a Southern socialite's mountaintop house.

Newbie agent Chase Campen's real-estate savvy is tested by a buyer and a seller, who are equally unyielding. Elsewhere, agent Scotty Brown markets a renovated Malibu home---to the chagrin of the seller's wife.

Dia and Ray try to sell a Hollywood home to a woman who is ready to move in. In Malibu, Carol Bird attempts the sale of a horse estate to a famous violinist.

Josh’s grandmother, Edith, gives him a tip about real estate in a down market, so he lists a plot of land in a golf course community, while simultaneously trying to ink a deal in Bel Air in under 24-hours. Chad lands a gem of a listing in LA’s “Golden Triangle,” but quickly finds the market’s enthusiasm for the neighborhood has tarnished. Also, Madison discovers that no matter how strong his business relationships might be, the numbers don’t always add up.

Josh lists the house of his friend Dr. Sam only to realize a clever marketing scheme can quickly backfire. He also travels with Grandma Edith to the old country in an effort to sort out his memory issues. Chad wins a listing for a prime Hollywood condo project but runs into the hurdle of selling a property that exists only on paper. At Chad’s birthday party Victoria gives him a surprising gift. Madison tries to find an ideal Malibu home for a retiree only to realize that one person’s ideal is another’s nightmare. Madison attends an event in Hollywood that much to his surprise, is hosted by Chad.

As Josh copes with suffering from a "quarter-life" crisis, he strives to find the perfect piece of land for a designer's multi-million dollar fantasy compound. Chad battles over negotiations with a seller while shepherding a longtime family friend through the process of buying her dream home. Madison reaches a career milestone with his first double-digit listing, and attempts to make a buyer - a picky client of Josh's - fall in love with the property. Meanwhile, conflict between Josh and Chad explodes.

Josh's business-savvy grandmother finds him an "obituary listing," but when he ends up representing both the buyer and the seller he has to find a way to delicately negotiate. Chad tries to score a listing with an NBA star for a rental property in Las Vegas, but finds himself clashing with the star's bossy manager. Madison finds himself confused by unrequited feelings for his ex-girlfriend while house inspections reveal unexpected issues for one of his buyers.

In the premiere episode of the second season of Million Dollar Listing, Josh tries to persuade his pal, Dr. Sam, to buy a fixer-upper with huge profit potential, but it puts a strain on their friendship. Chad is dealing with a temperamental client who wants to sell his million-dollar condo in a not-so-million-dollar neighborhood. Meanwhile, Chad's girlfriend, Victoria, springs some surprising news on him. Madison's assistant leaves him in a bind, just as he secures one of the biggest listings of his career.

Josh tries to make things right with Dr. Sam by finding him the perfect condo, but the listing belongs to his biggest rival, Chad. Chad is struggling with family issues while trying to sell a pair of condos for yet another demanding client. The pressure heats up for Madison, who is missing an assistant and is left in a tight situation on a high-end deal.

Josh agrees to a co-listing with another Beverly Hills agent, but realizes she might be putting the squeeze on his commission. Chad continues to struggle moving a high-end condo, he discovers Madison might be moving in on his territory. Meanwhile, Chad tries to make time for Victoria when a big-ticket client comes walking through his door. Madison puts a dream home on the market while his clients struggle with the nightmare of sliding market conditions. He also "strips down" for a good cause while wondering if he’s revealed too much. An open house in Malibu attracts the attention of all three realtors, which results in drama.

Josh Flagg is tempted with a top listing but must find the seller a new home. Meanwhile, Josh Altman faces a demanding client and the unexpected appearance of Madison Hildebrand at an open house, and an investor enlists James to shop for property.

Josh tries to move a half-demolished home in Beverly Hills only to have a buyer’s agent tear into him during negotiations. Josh puts pen to paper and writes Grandma Edith’s inspiring story. Chad thinks he’s listing a house for a friend, but finds out first-hand how the foreclosure problem is taking its toll. Meanwhile, he tries to win back Victoria by mixing business and pleasure. Madison picks up a dream client in a nightmare market – a buyer with plenty of cash to spend. He re-thinks his sexuality when he sees his image in a different light. A broker invites Chad, Madison and Josh to help him with charity work, but egos clash as the agents try and work together.

#16 - Jumping Through Hoops for a Signature

Josh wants a listing on 20 acres of ocean view land in Malibu, but the owner isn’t signing until he drafts and presents a marketing plan to him at his home in Montana. Chad lists a Hollywood Hills pad that should be a slam-dunk with help of another agent, while Madison hunts for investment properties for one of his most demanding clients. Chad asks his girlfriend Victoria a question that will make or break their relationship.

Josh Altman may have money on his mind, but with Heather's pregnancy, he's got baby on the brain. Josh Flagg is ready to dance to the top of the real estate market and waltz down the aisle with his fiancé. James has unresolved issues with Madison over a huge listing, but Madison wants him to Brexit his home turf. A new realtor, enters the fray and proves that she's not to be messed with.

#18 - No Guarantees in the Real Estate Game

Josh Flagg must make a difficult decision; Josh Altman risks losing his commission on a favor to his mother; Madison must jump through hoops.

In the worst market he’s ever seen, Josh lists a rundown Beverly Hills mansion to sell it quickly, but his potential buyer continuously thwarts negotiations. Meanwhile, Chad puts his reputation on the line by listing a million-dollar home for a spa owner, and Madison eagerly takes on the Malibu estate of a flirtatious sex advice author.

Competition between the agents heats up in Malibu as Chad snatches one of Madison’s former multi-million dollar listings. Meanwhile, Madison takes-on a familiar Malibu listing with an ocean view, but soon realizes that the market has bottomed out for top homes. And Josh makes a spur of the moment gamble while also dealing with a potential health issue.

Tempers flare when Madison learns about Josh Altman's date with his assistant Heather.

In an attempt to sell a villa-esque listing that has sat on the market for a year, Altman rents a dunk tank to entice buyers who might love to see him drenched. James & David enter heated negotiations on two of Hollywood's famous homes: The Playboy Bunny "Ranch" and the home where the movie "Mommie Dearest" was filmed. Meanwhile, Flagg reunites with clients who previously fired him in an attempt to sell them a high-rise condo.

Altman races against the clock after being thrown a curveball by his Bird Streets sellers. James and David experience difficulties with their Santa Monica gem as the sellers have their own ideas about price, and who the buyers should be. Tracy proves she can dominate other markets as she expands her territory for a new and massive Arizona estate.