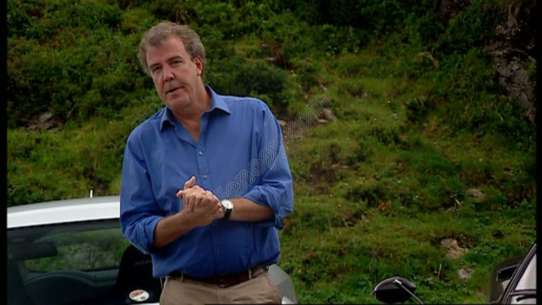 The BEST episodes of Jeremy Clarkson Meets the Neighbours

Jeremy Clarkson travels through Europe in an E-type Jaguar in search what makes England's neighbours so very different.

The motoring enthusiast explores Germany, where he visits a laughter clinic intended to help serious Germans find their humorous side and discovers that nobody has even heard of Blue Nun wine. His trip to the former East Germany includes a night in a hotel which recreates the living conditions of the Eastern Bloc, while at the Nurburgring he goes for a spin on the world's most feared racetrack.

Jeremy visits France, Britain's closest neighbor… and oldest enemy. On his travels, he attends an illegal dinner of banned foods, enrolls at the Paris School of Seduction and sails in the world's biggest yacht race where he discovers Britannia no longer rules the waves.

Jeremy visits Belgium to discover if the nation is as boring as some Britons seem to believe, experiencing the thrills of the World Pipe Smoking Championship and meeting people who bet on whether a cow will drop a pat in a field. Escaping to Holland, he discovers the Dutch display a disconcerting love of caravanning, and finds a secret club which wages war on speed cameras.

After four weeks on the road, Jeremy arrives in south-west France where he hopes to discover more about the Basques. Humiliated by his own weakness at a local sporting contest he quickly moves over the Spanish border, but the journey takes a more sinister turn when he witnesses the effects of terrorism. Later, he attends the Rioja festival, where everyone pours wine over their heads, and then he finds himself being pelted at a tomato-throwing fiesta.

The irrepressible presenter heads for the Italian Riviera, meeting up with nouveau-riche Russians and viewing the last word in tasteless decor in a £15 million three-bedroom house. In Italy, he dons body armour for lessons in gladiatorial combat and joins the judge's panel for a beauty contest - consisting of 'mature' ladies - before ending his jaunt in the company of the police.

The Moaning of Life