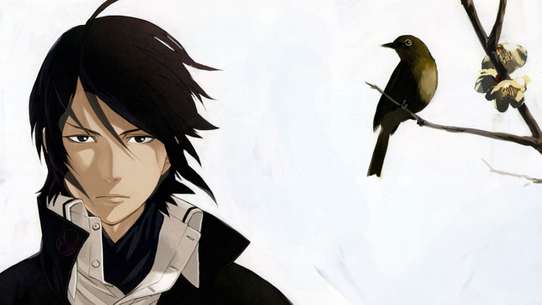 The BEST episodes of Intrigue in the Bakumatsu: Irohanihoheto

End of Edo Era - It was the time when long peaceful Tokugawa Dynasty began to be overshadowed triggered by the arrival of Westerners. During the upheaval, when youths were seeking for new age, there was an existence that brought turmoil and chaos. It was called Hasha no Kubi, or the Head of Conqueror. It was said that the person who could obtain the head could rule over the whole country.

Kanna has been promoted to the head of the elite English forces, and is planning an assault on Enomoto.

Akizuki strives to defeat Enomoto but he must first take on both Kakunojou and Soutetsu to do it.

With Akizuki closing in on Enomoto, he uses the fearsome power of the Head of the Conqueror to defend his castle.

Hijikata finally starts to realize that Soutetsu is up to something.

Under the command of Kanna, the English knights launch a daring raid against Enomoto.

#6 - Chance Meeting in the North

Akizuki finally manages to catch up with Enomoto but, once again, Kakunojou gets in the way.

Akizuki sets off for Ezo where Kakunojou is still waiting at the hospital.

Akizuki is nursed back to health by a young woman and her son.

Kakunojou is in a state of shock regarding her actions on board the ship, but her spirits are lifted when she is reunited with the troupe.

The English knights launch a second attack, but it ends in disaster.

Kakunojou and Akizuki have a difference of opinion on how to proceed against Enomoto.

Now that Kakunojou has foun dher sword, she travels north with Akizuki to reach Enomoto and the Head of the Conqueror.

Akizuki and Kakunojou are traveling together across Japan to find Kakunojou's new sword when they receive an interesting message.

An ominous star lurking in the sky while two horsemen deliver an urgent message to the emperor. Later, Youjiro saves two kabuki students from sudden death.

#15 - The Conqeuror's Head Enters a Soul

Soutetsu lets Juubei escape with the Conqueror's Head. Youjiro and Kakunojou chase after him, but their attempt is thwarted by the English forces. Later, a very dark and dangerous enemy is born.

The troupe is attacked by a group of strange ghosts, and it is up to Youjiro to save them.

#17 - The Troupe Returns to a Temporary Stage

The troupe travels to Edo based on the information in Soutetsu's script.

Youjiro meets an old friend from his childhood, and he thinks back on his life--in particular the time he spent with Sakamoto. Meanwhile, a huge army is headed towards Yokohama.

Nakaiya Juubei finally shows himself and tries to manipulate Katsu with the Conqueror's Head. Meanwhile, Youjiro must fight Kanna to try and reach the Head before it is too late.

Soutetsu leaves the troupe and seeks out a strange object capable of summoning a demon before he meets with Nakaiya Juubei. Meanwhile, the rest of the Troupe think back to when they first met.

We learn of the bloody history of Yokohama and of the even bloodier history of Youjiro's sword. Meanwhile, the troupe is creating a clever plan.

Nakaiya Juubei recruits three dangerous men who quickly become possessed by demons. This causes them to lose their minds, and Youjiro must save them.

#24 - A Curious Tale of An Underhanded Scandal

Parkes arranges a bodyguard for Katsu. Meanwhile, Youjiro and the theatre troupe have finally caught up with their target. But even out-numbered and surrounded he puts up a good fight.