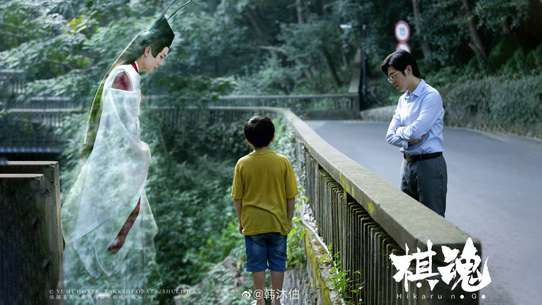 This drama is based on the classic Japanese manga of the same name, The Soul of Go, originally written by Yumi Horita and drawn by Ken Obata. It tells the story of time in the coincidence of chance to discover an ancient chessboard, and thus got to know the first person - Chu Ying, who has been entrenched in the chessboard for thousands of years in the South Liang Weiqi, and gradually under his cultivation to the Weiqi interest, and aspire to become a professional Go player story.

#5 - The Twenty-third Game: Hanging by a Thread

#6 - The Twenty-fourth Game: The Final Test

#7 - The Twenty-fifth Game: Nobody Advances for Certain

#9 - The Twenty-seventh Game: The Initiator

#10 - The Nineteenth Game: You are My Lucky Charm

#12 - The Thirtieth Game: The Divine Move

#14 - The Thirty-second Game: Answer of the Millennium

#19 - The Tenth Game: Chasing the Phantom

Liang didn't give up and went to Guang to have to have a another game; While working with Chu, Guang beat a lot of opponents and he saw them being broken down. He started to question himself and was thinking about stop helping Chu.

Guang left halfway during the game with Yü and Chu was very sad and then disappeared. 6 years later, Liang came back from Korean and was seeking for a game with Guang and the latter was busy preparing a game with a bully called He Jiajia.

Guang fixed his relationship with Chu and then pretended himself a high school student to attend a weiqi competition with Wu and He. They won the champion but was later disqualified because of Guang's age.

#23 - The Fifth Game: I Should Be Afraid of You Instead