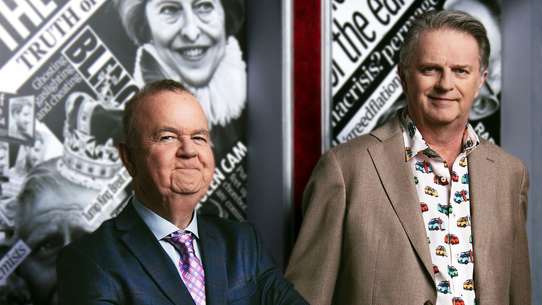 The BEST episodes of Have I Got News for You

Based on the week's news, Have I Got News For You is fronted by guest hosts and features two regular team captains, Paul Merton and Ian Hislop. Each week the show invites two guests to cast a jaundiced eye over the week's news, resulting in a fast flow of anarchic, spontaneous and hugely entertaining wit and humour. Guests typically represent the world of politics, comedy, show-business and journalism, and are often themselves particularly newsworthy participants. The final touches of Have I Got News For You are put together only hours before recording, allowing guests to comment on the late-breaking news stories of the day.

A special edition of the show featuring highlights from the year.

A compilation of the popular news quiz, looking back at the big news of 2011. With team captains Paul Merton, Ian Hislop and a variety of guest hosts and panellists.

Jeremy Clarkson acts as host, with Ed Byrne on Ian's side and Charles Kennedy on Paul's.

Brian Blessed acts as host, with Alan Duncan on Ian's team and Marcus Brigstocke on Paul's.

After Children In Need, Ian Hislop and Paul Merton return for a winter dose of Have I Got News For You. Host is Dan Stevens and guests are Miles Jupp and Susan Calman.

With Dermot Morgan on Ian's side and Janet Street-Porter on guest captain Eddie Izzard's.

A compilation of highlights from this year's editions of the satirical current affairs quiz, in which regular team captains Ian Hislop and Paul Merton were joined by a variety of guest hosts and panellists to take on the big news stories of 2014. Those in the presenter's chair over the past few months included Jennifer Saunders, Sue Perkins, Frank Skinner, Victoria Coren Mitchell, Damian Lewis, David Mitchell, Jack Dee and Martin Clunes.

The Nightly Show with Larry Wilmore