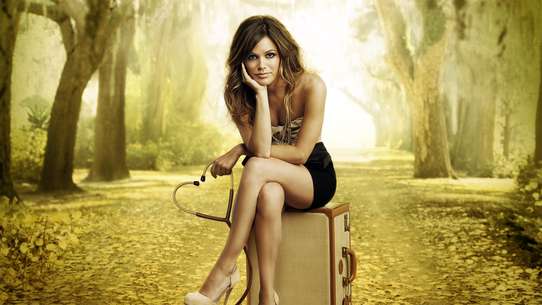 The BEST episodes of Hart of Dixie

Fast-talking New Yorker and brand new doctor Zoe Hart has it all figured out - after graduating top of her class from medical school, she'll follow in her father's footsteps and become a cardio-thoracic surgeon. But when her dreams fall apart, Zoe decides to accept an offer from a stranger, Dr. Harley Wilkes, to work with him at his small practice in Bluebell, Alabama. Zoe arrives in this small Gulf Coast town only to find that Harley has passed away and left his half of the medical practice to her in his will.

Zoe makes a monumental decision, and Wade tries to fulfill her wishes before their baby arrives. Meanwhile, Lavon feels awful about misleading Lemon and tried to repair things, and George and Annabeth are faced with a big choice.

Zoe tries to be a supportive friend to Wade, but when she makes a grand gesture, Wade is forced to make a tough decision about his future with the Rammer Jammer and BlueBell. Lavon and George meet their hero Don Todd, who helps them see things in their life more clearly. Grandma Bettie tries to convince Lemon that she has to take her search for a suitable husband more seriously. Meanwhile, AnnaBeth is trying to picture her future with Davis.

Wade and Zoe finally start to make progress after weeks of relationship issues.

Zoe to tries ignore her problems with Wade and focus on work; Wade asks Lemon for advice about Zoe.

With an impending storm about to hit Bluebell, George and Lemon prepare for their wedding day. Meanwhile, taking shelter from the storm, Zoe finds herself stranded in a barn with Wade.

Zoe forces Wade to change his ways after seeing him flirting with some women.

While Wade is upset with Zoe over his relationship issues, she decides to lay low and help George out with his problems with Lemon. Meanwhile Lemon and Wade decide to play hooky from their respective problems. AnnaBeth is excited to introduce her new boyfriend to her parents, until they decide they would rather spend time with Lavon. Brick tries to help Wanda and Tom cope with infertility issues.

Zoe and Wade feel unprepared for parenthood; a surprise shakes Brick to the core.

Zoe gets sad when she realizes she doesn’t have an heirloom to pass down to their child, Brick is disappointed when everyone forgets his birthday, Lemon and Zoe try to make plans to have a girls’ day, and George’s parents come to town.

When Wade's dad asks Zoe for help with his love life, she is happy to get involved, until Wade advises her that no good can come from it. Lavon recruits George to help persuade the city comptroller to change BlueBell's billing on an exit sign, but finds himself in competition against his rival, Mayor Gainey. Meanwhile, Lemon continues to try to raise Fancie's profile, but all her plans seem to go up in flames.

Zoe enters a gumbo contest in yet another attempt to prove she can fit in as a Bluebell resident; Lavon has a crush on Zoe and Brick's new receptionist, and the news sours Lemon; and Zoe and Brick must look past their differences to save someone's life.

Zoe finds herself in the middle of Wade and Vivian’s relationship, putting her in an awkward position. Things between Lavon and AnnaBeth are getting worse and starting to affect the town. Lemon is upset when she receives a less-than-perfect health inspection grade and devises a plan to get it changed. Meanwhile, George needs a distraction and begrudgingly agrees to go on a date with a Bible School teacher.

Trying to be hospitable to Joel, who is visiting BlueBell, Lavon and AnnaBeth invite him and Zoe over for a quiet dinner, but when Lemon meets Alabama's most eligible bachelor, Carter Covington, she invites herself along with Carter to the soiree. However, when some unexpected guests show up to the party, Lemon's ruse with Wade risks being exposed. Meanwhile, George makes a bad decision involving Lynly, which could ultimately ruin his friendship with Lavon.

Lavon organizes a talent show; Wade and Zoe wind up in a compromising situation.

Zoe is convinced that she and Lavon are cursed and the only way to make things right is to fix the past. When Vivian’s son asks Wade for some advice, he is happy to help, but not everyone is excited about his methods. After an unplanned encounter, George and Lemon try to avoid each other, but it is more difficult now that they are business partners. Meanwhile, AnnaBeth is getting fed up with one of Brick’s patients, Davis, until she learns the real reason behind his ailments.

Zoe is happy that Wade has decided to stay in town, but struggles to get him to notice her romantic gestures; someone from Brick's past pays him a visit; Lavon and George want the same thing.

When a heat wave rolls through Bluebell, Zoe realizes that the hot weather is affecting everyone's behavior and lowering their inhibitions. In fact, Zoe struggles to fight her heat-induced attraction to Wade until she finally gives in. Meanwhile, Lemon is determined to win over George's parents when they come to town for a visit, but she is caught off guard when Lavon shows up to the same restaurant with his date, Didi.

After George confesses his feelings to Zoe, she finds herself having to make a tough decision between George and Wade, leaving the two guys at odds on how to handle the situation. In search of some much needed girl advice, Zoe makes a new fast friend in former BlueBell resident Ruby Jeffries, who no one is excited to see. Lemon decides it’s time to get her own apartment and a job, but it’s tougher than she thought. Continuing to forge ahead with her new life, Lemon proceeds to return the wedding presents, but a sudden detour to Zoe’s while holding a cake knife creates a stir with the townspeople.

When Nascar’s Brian Vickers has to drop out of hosting Bluebell Junior League’s annual turtle race, Lemon is reluctantly convinced that the mayor is the perfect replacement as her co-host. Zoe is asked out on a date by a handsome local veterinarian, Dr. Judson Lyons. Wade has an unexpected visitor who stirs up all kinds of trouble for him.

Zoe reluctantly agrees to allow Joel to throw her a birthday party at Lavon's to help cheer him up, but things go awry when her mom surprises her with a visit. Vivian wants to meet Wade's dad, but Wade is leery of how she might react. AnnaBeth gets an interesting request from the Belles that she was not expecting but, in light of recent developments might be the perfect distraction for her. Meanwhile, George is determined to prove to Tansy that his nemesis Scooter McGreevy has not changed and is fooling everyone.

Zoe decides that it’s too soon in her relationship with Judson to go to the annual Sweetie Pie Dance so instead she makes plans to have a sleepover with Rose, whose parents are going out of town. George misplaces the save the dates for his upcoming wedding which causes major trouble in Lemon paradise. Lemon wants her father to finally move on from her mother leaving him, so she secretly gets him a date for the dance.

Zoe learns that Joel has hired some unreliable workers to help with the renovations, but when one gets hurt on the job he becomes litigious. Lavon has organized BlueBell’s Renaissance Faire to help keep himself busy, but when no one wants to buy tickets, he decides to use Lemon’s two suitors as the main event. Meanwhile, Wade is excited about his upcoming anniversary with Vivian, but her son has other ideas.

When Zoe finds herself treating her uncle, she takes a chance and invites him to the Hanukkah celebration that she is hosting. However, this lands her in trouble once again with Vivian Wilkes. Lemon enlists George and Lynly to help uncover crucial information about one of Brick's exes before he does anything rash. Meanwhile, Wade has a horrible toothache but refuses to go to the dentist, until Tansy intervenes and helps him to open his eyes to his future.

After Lemon's fallout with the Belles, she is blacklisted from the Junior League Halloween Masquerade party, so she calls her Grandma Bettie for help and lands herself a date with another of Alabama's most eligible bachelors. Lavon has a big surprise for his anniversary with AnnaBeth, but when she has a health scare, she turns to Zoe to help her out. Meanwhile, during the party, George has to do damage control with the town judges and Wade keeps finding himself in trouble with ineligible ladies.

Wade somehow convinces Lemon to dress up as Joelle as part of a scheme to convince Joelle’s ex-boyfriend that he didn’t actually see Wade and Joelle together. Lavon asks Zoe to help him figure out why Didi has been avoiding him, but once Zoe uncovers the shocking reason she isn’t quite sure what to do with the information. George comes to Zoe for advice in determining whether there is a medical explanation for the behavior of one of his clients.