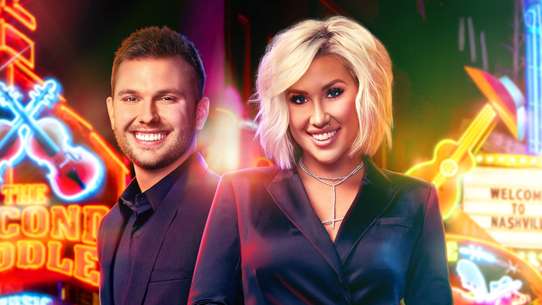 The BEST episodes of Growing Up Chrisley

Todd Chrisley's adult children, Chase & Savannah, travel to Los Angeles to pursue their dreams. Chase wants to be an actor and Savannah has her sights set on the beauty industry, but Nashville isn't LA, and their father is still watching them closely.

Following Chase and Savannah Chrisley as they embrace adulthood. Now in their mid-20s, the siblings enter a new chapter in their lives as they navigate new and old relationships, businesses and family dynamics.

Savannah prepares for the launch of her makeup line; Chase and Elliott clash as roommates.

Chase struggles to fulfill his promise of supporting Emmy's growing business; Savannah finds herself behind "bars" after making a bet with Chase.

Chase and Elliott get off the grid. Savannah's controlling tendencies push Nic away.

Chase wants to deepen his relationship with Emmy and decides to take things to the next level; Savannah's recent trauma has her burying her head in work and missing out on life.

Chase and Savannah move into their LA home and realize life in the city isn’t what they expected.

Savannah feels pressured when Chase insists she spends time bonding with Emmy; Chase crushes Elliott's big dreams and to save his friendship, he has to pull out all the stops.

Savannah and Chase are in full adulting mode – well, kind of! Savannah has a new job in L.A. as the Creative Director of a clothing brand, and Chase has decided to pursue a career in Nashville… as Todd’s Golden Child. Boss Lady With the help of her best friend, Blaine, Savannah moves into her new L.A. digs. Blaine is the perfect person for Savannah to hang with and talk to about all things marriage (!!!). Savannah’s new house is smaller than her previous L.A. place, but now she’s supporting herself. She even opted out of a delivery service to save money! After a few of her design-savvy touches (and figuring out the Wi-Fi) Savannah knows this spot is the perfect new beginning for her career. As much as she misses being on Todd and Julie’s tab, Savannah is proud to be doin’ it solo. The only thing she’s missing is someone to come home to! Even though she’s in a new chapter of adulting, Savannah misses living with Chase. The Golden Ticket Now that Savannah’s out of the house, it’s time for Chase to step into the limelight as the golden child! Chase knows that being the golden child comes with special perks, so he’s up for the challenge. How hard could it be shop and get your nails done? Todd agrees to give Chase a shot -- but Chase fails at step one. He can’t even pick out an outfit for Todd! Chase didn’t know he could hate shopping until this excursion! Chase reconsiders his play for golden child when he’s face to face with the biggest obstacle of all -- waxing. The “works” treatment is just too much for Chase, and he quickly abandons his efforts to become the golden child. Carpe Diem! After a heart-to-heart with Nanny Faye, Chase realizes he needs to go back out to L.A.! He wants to follow his dreams -- whatever they are. Chase shows up unexpectedly to Savannah’s door, he needs a place to crash! Savannah allows Chase to stay with her -- he’s a pretty good back-up to Blaine and Nic. Now that the dynamic duo i

Nanny Faye and Todd are in town to visit Savannah and Chase! Honestly though, it seems as if they really came for Nic. Todd is wary that Nic has been living with Savannah and decides to snoop, while Chase has his own problems with his growing candle business. Mission Incognito Todd believes that couples shouldn’t live together until they’re married, and the last time he checked, Savannah and Nic weren’t married yet! Todd is very suspicious that Nic has been crashing at Savannah’s house in L.A. even though the duo denies it. First piece of evidence in Todd’s case -- there are three toothbrushes in the bathroom! Nanny Faye tries to talk Todd off the ledge as she doesn’t think Savannah is doing anything wrong. After a ton of convincing, Todd gets Faye on board to spy on the couple -- he needs an answer! Nanny Faye is ready with latex gloves, binoculars and walkie-talkies; she can never be too careful! Even though she’s helping Todd, Nanny Faye knows that Savannah wouldn’t lie to her. Faye and Todd sleuth their way around Savannah’s house but find no hard evidence that Nic is living there. Todd decides they have to wait for the night to see if Nic leaves before Savannah goes to sleep! In a not-so-subtle recon mission, Savannah busts Todd lurking around the perimeter of her house. She is NOT happy. At a peace offering lunch, Nic admits that he did ask Savannah to move in together, but she said no! It turns out both Savannah and Nic respect Todd’s values and beliefs. In a rare turn of events, Todd admits that he was a little off-base. Candles get Lit Chase is ready to take the next step with his candle business and decides to have Elliot as his right hand man. Chase wants to get his vision for the candles into local stores around L.A. Chase calls their first meeting in a communal work space, a concept that Elliot can’t seem to understand. Elliot thinks he’s already ahead of the game and presents Chase with their first sale -- a cactus

Savannah finds herself stuck in a lie between her two loves - Nic and shopping! Chase decides to hop on the relationship bandwagon himself. The only problem is, he has no prospects – well except for Elliot. Nic is in town, which means plenty of quality time – and shopping - with Savannah! Savannah can’t seem to stop spending money, she calls it research – after all her job is in fashion! Nic is more of a saver and doesn’t know how it’s even possible to spend that much money. Savannah is even balling out on kitchen supplies; the limit of her shopping does not exist! Savannah promises Nic (and Chase) she’ll cut back on the shopping and return some of the junk she bought. Her new vow lasts a day before she’s back on the shopping grind. In an attempt to fool Nic, she hides her new swag around the house. Nic finds shoes in the washing machine and addresses the problem head on – shoes belong in the closet! Savannah is embarrassed to admit that this is her flaw, but hey, it’s better that Nic sees it before they get married! The two love birds sit down and plan out a (hefty) budget. Savannah and Nic seem to have this compromise thing down pat! The Love Connection Seeing Savannah and Nic around the house makes Chase realize he’s ready for love – and not just from Elliot! The boys have tried to meet girls in the club, but they haven’t found their soulmates. Savannah tells Chase to read a self-help book, maybe that’ll give him the answer. Elliot throws out the idea of an arranged marriage, but that doesn’t seem right. He tops himself by suggesting they use a matchmaker to help them find dates. Chase and Elliot meet with the matchmaker, and she does give them good advice. If Chase wants a girl like his mom, and his mom doesn’t go to the club, maybe he shouldn’t search for a girl there! The big caveat with the matchmaker is that they’ll have to shell out $6,000. Even Savannah (the queen of shopping) thinks this is a steep price. Why

Chase must give his biggest acting performance yet and Savannah tackles unfinished business.

Todd and Elliott think Savannah is in a cult; Chase tries to navigate the Los Angeles dating scene.

Todd and Julie crash Savannah's NYC business trip. Chase and Elliott decide to become lifeguards. Chase and Elliott are spending some hard-earned relaxation time on the beach. With Savannah headed out of town, Elliott plans to throw a party. The friends briefly negotiate pricing and envy the seemingly perfect lifeguard lifestyle: an easy job with ample authority, plenty of tanning, and lots of women. Savannah meets Todd and Julie in New York for some family time. The loving daughter wants to show her parents around the city, but she also has work to attend to: approving packaging, assembling style guides. Todd and Julie decide to sit in … much to Savannah’s chagrin. Todd’s input proves to be a bit much.

Savannah lays down the ground rules for Chase. Now that they have to support themselves, he has to pay 50/50 for house expenses! Chase enlists the help of his bff Elliot to make some cash, while Savannah tries to decompress from her work stresses. Pony Up Chase tries to butter up Savannah by making her breakfast, but his omelet skills just aren’t up to par. Savannah tells him they have to split living costs, $2000 a month! Chase asks Elliot to help him come up with a plan of attack. Elliot’s first suggestion of bathing the elderly gets a hard pass from Chase, and his second idea to create a mood board, also won’t cut it. The two amigos run into an Instagram model in the park who tells them they can rent out spaces for money. Chase decides to list Savannah’s house -- he can get paid to have models around! Chase takes pictures of Elliot in the house to up the chance of them booking a client. Knowing Savannah will never allow it, Chase brings in the big guns (Todd) to keep her distracted. Stress Effect Savannah’s new job is coming in hot! The amount of e-mails she’s receiving is really starting to stress her out and she’s nervous! Chase stops Savannah from stress eating every bag of chips in the house and calls Todd to come help her out. Chase knows Todd will be able to keep Savannah occupied while also calming her down. Todd’s first stop is taking Savannah to get micro needling done -- apparently needles to the face is quite soothing. After the procedure, Savannah gets ANOTHER e-mail asking her to come into the office for a meeting. There’s only one big problem -- her face is bright red from the treatment, and she can’t put on makeup! Savannah buys a new outfit, puts her big girl pants on and decides to go into the office as she is. Busted! Chase’s plan to rent out the house goes surprisingly well -- he has a client! An Instagram model and her posse rearrange Savannah’s furniture (and pictures of Todd) in order to get the rig

Todd visits and finds that Elliott is Chase’s manager and Savannah is in a revealing photo shoot.

Faye, Chase and Savannah take a road trip to LA; Todd and Julie adjust to the kids being gone.

Chase and Savannah Chrisley embark on a cross-country move to prove they're independent grown-ups.

Worried that Elliot is becoming a third wheel, Chase and Emmy team up to find him a girlfriend. Savannah is forced to deal with her shopping addiction at the insistence of Nanny and Chadd.

Chase hustles to make money; Savannah tries to create an actual product for her beauty brand.