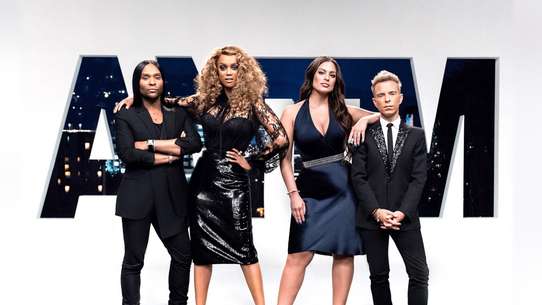 The BEST episodes of America's Next Top Model

Created by world-renowned supermodel Tyra Banks, who executive produces the series with Ken Mok, AMERICA'S NEXT TOP MODEL chronicles the transformation of everyday young women into potentially fierce supermodels. Fourteen participants will live together and vie for the incredible grand prize: an opportunity to be managed by Ford Models, a fashion spread in Elle magazine, and a $100,000 contract with CoverGirl. Cameras catch each moment as participants face weekly tests that determine who makes the cut. With mentoring by supermodel Tyra Banks and exposure to high-profile fashion industry gurus, the finalists compete in a highly accelerated modeling boot camp, a crash course that could lead to supermodel fame. Participants are asked to demonstrate both inner and outer beauty as they master complicated catwalks, intense physical fitness, fashion photo shoots and publicity skills, all under 24-hour-a-day surveillance of the AMERICA'S NEXT TOP MODEL cameras.

There are only two girls left and the pressure takes a toll. During the taping of a Cover Girl commercial, one model overanalyzes her shoot and the other model's nerves begin to get the best of her. Later, the girls get a surprise that brings them both to tears and participate in a final runway show, where disaster strikes for one of the models. Jay Manuel joins the final judges' panel, where America's Next Top Model is chosen.

This episode starts with Dominique's alarm clock going off sporadically throughout the night, irritating her roommates, mostly Claire. Tension mounts when Lauren, Claire, and Whitney accuse Dominique of being a negative person, and gang up on her bringing her to tears. But her mom convinces her that she is better than them and Dominique believes her and tries to ignore them. Tyra teaches the girls how to pose at the end of the runway and how to pose while looking pained. She then declares a pose-off, in which Anya impresses Tyra the most. The teach was actually a secret challenge, and Anya wins a chance to shoot timeless nude photographs taken by Nigel Barker. Whitney is commended for her photo, while Fatima is finally given approval for her range of poses. Katarzyna produces her best photograph to date while sporting a wig, which inspires Tyra to give her a haircut.

A photo shoot challenge leads two models to realize they need to put their personal relationship aside; the models discover common ancestry links during a futuristic sci-fi photo shoot.

#4 - The Girl Who Drives Everyone Crazy

One girl becomes obsessed with moisture, while another proves she a good liar. All the girls get a real eye openner when they arrive at their photoshoot.

It’s that point in the season between the beginning and the end: we aren’t going abroad yet or doing go-sees, but the numbers are whittling down. In the first scene, several contestants express their feelings about the competition. Kayla expresses hope that she will win. Ann says she feels more confident now that she has received so much praise. Chelsey says she really wants to win and start her modeling career.

On the finale for Cycle 3, the final three do a photoshoot that will be the ad for Covergirl Cosmetics if they win. Wearing sparkling tops and posing on a zenlike pond, Eva, Yaya, and Amanda make it a hard decision for the judges. The final two take to a unique runway show. When the judge's deliberation is over, the winner is announced.

The three remaining models struggle through a talk show correspondent challenge and receive an impromptu visit by Tyra that turns into a photo shoot. During another photo shoot, which includes a male model, they're all struggle to remain composed with so much at stake and Ivan Bart, Senior Vice President and Managing Director of IMG Models, joins the judges' panel to help choose the final two models.

#8 - The Girl Who Gets Rushed To The Emergency Room

That evening after everyone had finished their shoots for the day Tyra took them out to dinner. The next morning Adrianne woke up and was so sick. She felt hot, shaky, and was throwing up. While at the emergency room, doctors found she had food poisoning. The judges were impressed when Adrianne walked into judging that night wrapped in a blanket looking pale.

The girls head to a theme park where they must pose while riding a rollercoaster. The winner of the challenge is photographed for a feature on Tyra.com by Tyra herself. This week's photo shoot takes the girls underwater as they are photographed by top beauty photographer Matthew Rolston, who is also this week's guest judge.

The remaining six contestants have arrived in Sao Paulo, Brazil, where they will be challenged to a scavenger hunt throughout the city, testing their navigational skills. The photo shoot finds the ladies posing as cultural icons.

The four remaining girls bare it all at a risque photoshoot. Two of the girls fail to provail, while 2 end up on top. Then the girls get tested on there social skills. Some show too much, and some, no where near enough.

The remaining three girls are put to the test when they have to shoot a commercial and a photo shoot for CoverGirl LashBlast Mascara. It is revealed that the winner of the cycle will have her ad on a billboard in Times Square. During the commercial, all of the girls struggle with their lines, but still manage to look like real CoverGirls. During judging, the judges commented that Whitney's commercial was average but deemed her photo stellar, while they were not impressed by Fatima's robotic performance in her commercial. Anya's commercial is described as a "trainwreck", but that is overlooked by her personality on film and her stellar look in the commercial. However, her beauty shot, as portrayed by Paulina, came off as her looking "stupid". Anya was called first for her personality in her commercial, leaving Fatima and Whitney in the bottom two, both for the fourth time. Tyra is still not clear who Whitney actually is and whether she is not as beautiful as she seems to be and act. They also criticize Fatima for being stubborn and uninspiring in photo shoots. Whitney moves on and Fatima is eliminated. Nigel shoots the final two's Seventeen magazine cover for the July edition, where they both do a good job. The two finalists must then compete in a Italian fashion runway show. Anya and Whitney compete against each other in Versace gowns, with their outfits handpicked by the designer herself, Donatella Versace. During the show, Whitney and Anya both have their up's and downs for their runway walks. During the final deliberation, Whitney was told she did a very good job except that she forgot to pose long enough at the end of the runway. Anya was told she didn't walk as strongly compared to Whitney's confident strut, but she still looked stunning. The judges then examine both Anya and Whitney's body of work. The judges felt that Anya's photos were more "edgy" and "high fashion", while Whitney's were more "warm and approachable".

#13 - The Girl With the Bloodcurdling Scream

An eliminated model returns to the competition; the models must keep their composure during a challenge at a former slaughterhouse with a dark history; a fashion shoot with a focus on HIV and AIDS awareness.

The three finalists are ultimately put to the test in their final photo shoot and commercial for CoverGirl. Things do not go so well when one model struggles to look youthful in her pictures and another struggles to say her lines naturally for the commercial. After the CoverGirl shooting is done, one model is eliminated and the final two face off in the final runway challenge, after which the winner of cycle 8 is crowned.

The final four models learn hip-hop hula moves to better channel Pele, the Hawaiian goddess of fire and volcanoes, for the photo shoot. And then the bad news: the ladies learn that two of them will be eliminated.

The chosen final 13 become Superheros for their first photo-shoot, and two girls get 'acquainted' in the 'Top Model' limo...

Never before seen footage of the 5'7" and under models of cycle 13 of America's Next Top Model.

It all boils down to the moment when Tyra reveals who will become America's Next Top Model. The final two girls must pull out all the stops to impress the judges and nail their final CoverGirl commercial in Hawaii.

Tyra's mother photographs the final four models with their moms; model Chrissy Teigen shares tips on how to succeed in the modeling industry.

The All-Stars are given the most difficult challenge yet, as they are asked to write and sing a song about their lives, with a surprising twist.

The models get tested at a commercial shoot to do ridiculous requests with a fake director played by comedian Reggie Watts. At a "flawsome" photo shoot, which highlights flaws to show they are beautiful, one of the models can't focus because of a fight between the girls and the guys in the house.

During a timed challenge, the models race to locations in Seoul; a models winds up isolated after getting caught in a lie; a confrontation occurs between a model and Yu Tsai.

Past participants join three of this season's models in a fashion show, a model gets sick and enters the hospital, and the girls are put to the test on a runway suspended over water.

The girls head for Wilhelmina where they are told they have to go on go-sees. While there, the girls are surprised with a trip to Paris. When the girls arrive in Paris, Robin proves she's full of hot air.

#25 - The Girl Who Sticks Her Foot In Her Mouth

The models hit the foreign streets with their portfolios to meet local designers, but one model has a breakdown when she gets lost in the city. Later, at the photo shoot with Nigel Barker, the girls face off against an angry bull while striking dramatic poses, and one model makes a comment to Nigel that she later regrets.