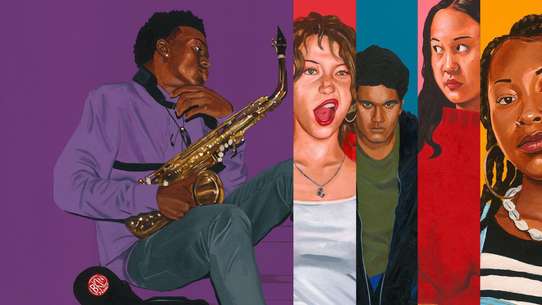 The BEST episodes of Grand Army

Every episode of Grand Army ever, ranked from best to worst by thousands of votes from fans of the show. The best episodes of Grand Army!

Five students at the largest public high school in Brooklyn take on a chaotic world as they fight to succeed, survive, break free and seize the future.

Dom, Joey and Sid find some release. After helping to lead the Black Student Union sit--in. Jayson stuns the crowd at his Lincoln Center performance.

Sid struggles with his secret. Nudged by her girls, Dom finally acts on her crush on John. A night of partying takes a devastating turn.

Joey copes with a difficult setback in her case. Choking under pressure, Dom breaks trust with a teacher - and John. The real Sid stands up.

Traumatized, Joey spirals. Sid opens up in his harvard essay. A health crisis puts more pressure on Dom to financially support her family.

Sid and Victor's science experiments have revealing results. Dom's nonstop hustle takes a toll. Jayson gets into a jazz competition, with a catch.

Joey stages a protest at school. Owen and Jayson face a harsh penalty for their lock down prank. A hookup leaves Leila feeling awkward.

Exposed and suspicious after his essay leaks, Sid looks for his betrayer. Dom lets her vulnerability show - and shine - at her internship interview.

A bombing blocks away sends Grand Army School into lockdown, building pressure that spills over at the "party of the century" that night.