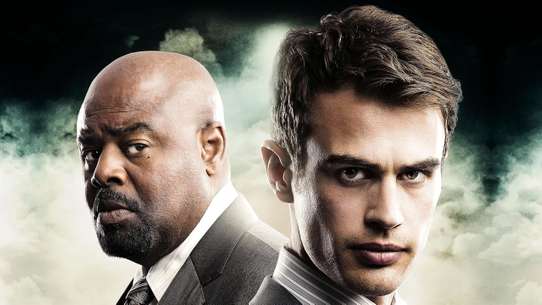 As he’s interviewed for a story about his career, Walter William Clark, Jr. flashes back on his hard-fought journey from street kid to the most powerful man in law enforcement. After only three years as a beat cop, Clark’s heroics on the job make him bold enough to ask for and receive the unheard – of promotion to Homicide Detective, angering the members of his new department who are eager to see him fail. Though laser-focused on moving up the ladder, Clark’s soft spot is serving as the sole caregiver and supporter of his sister, Agnes, a teenager demonstrating increasingly dangerous behavior. Keenly observant and politically savvy, the Golden Boy bases his career decisions solely on his need to succeed as quickly as possible, and he’ll find that his epic journey will be filled with consequences.

When Clark is relegated to desk duty, he delves into Owen’s cold case in which the murder investigation of a construction worker was compromised by the events of 9/11. Meanwhile, Deputy Mayor Holbrook pulls a gun on Clark and Margot, Agnes drives away with her father, and Owen gets his long deserved promotion.

When a high-end call girl is found dead, Clark learns that his archenemy, Deputy Mayor Holbrook, was her last client. Meanwhile, Diaco struggles with the decision to put his father in a nursing home.

While trying to track down the person responsible for killing a priest, clues lead them to Natasha, a criminal informant from a previous case, who looks good for the crime. Meanwhile, Agnes sets out to find her mother after she goes missing.

Owen takes the lead on a murder investigation involving the brother of his former criminal informant who was killed a few years before. Meanwhile, Clark struggles with whether or not to let his recently sober mother back into his and Agnes' life.

When a police officer who worked with Owen and Arroyo is killed while moonlighting for a rap mogul, Clark is called to investigate. Meanwhile, Clark threatens to expose Arroyo and McKenzie's relationship.

McKenzie seeks justice for her family when bullets found at the scene of a subway shooting match the same gun that killed her brother several years earlier. Meanwhile, Owen has reservations about retiring in two years.

After learning that they are both up for a promotion, Arroyo and Owen try to be the first to make a key arrest.

When the family of a star basketball player who was found murdered ignites a high-profile investigation, the case unearths Clark’s feelings about his family struggles. Meanwhile, McKenzie threatens to end her partnership with Arroyo after she finds out he lied to her.

Clark and the unit hunt for the murderer of an aspiring young model found floating in the bay. Meanwhile, Clark becomes a suspect when someone from inside the investigation leaks information about the latest case to Margot Dixon, a reporter Clark has been secretly seeing.

Clark investigates an incident in the projects that left a gangbanger dead and a teenager injured. Meanwhile, Arroyo threatens to go public with the wire tape exposing Clark giving a criminal informant confiscated money.

To avoid being arrested, a petty thief leads Clark to a murdered, drug addicted young woman with a missing daughter. Meanwhile, Clark and Arroyo continue to butt heads.

Clark and Owen investigate the murder of a wealthy philanthropist who is also the daughter-in-law of a shipping mogul. Meanwhile, Clark’s mother asks for help with a loan shark who is harassing her.

As Walter Clark Jr. is interviewed about his career, he reflects on his journey from homicide detective to the NYPD's youngest police commissioner.