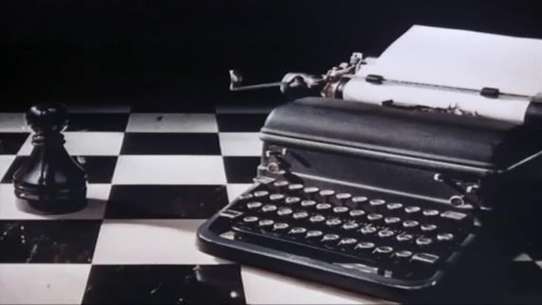 The BEST episodes of Ellery Queen

The son of a police detective solves baffling crimes.

#1 - The Adventure of the Disappearing Dagger

In the series' finale, Ellery probes the murder of a retired detective who was killed while investigating a five year old unsolved murder case.

#2 - The Adventure of the Eccentric Engineer

Heeeeeeeeeeere's Ed. Ed McMahon, that is, who plays a once brilliant but now seemingly senile inventor who is murdered in his electric train workshop. This one's a toughie because it appears as though no one could have entered or left the workshop during the time in which the murder must have taken place.

#3 - The Adventure of the Chinese Dog

On a fishing trip to the town of Wrightsville, Ellery and Inspector Queen are dragged into the case of the murder of a wealthy man who was whacked over the head with an ornamental dog figurine meant as a wedding gift for his daughter and worth nearly half a million dollars. It seems as though two rival candidates for sheriff want the Inspector to solve the town's first murder in decades so that they can grab the credit.

Radio star Vera Bethune is poisoned during the taping of her show. She survives and asks Ellery from her hospital bed to look into things. Unfortunately for both Vera and Ellery, she is shot to death while in the hospital. Ellery and the Inspector are both guilt stricken over failing to protect Ms. Bethune and are determined to find her killer from among the usual numerous suspects. But radio mystery star Simon Brimmer is determined to beat both Queens to the solution in order to retain a sponsor to his radio program. A golden girl might have a hard time with this one.

#5 - The Adventure of the Hardhearted Huckster

Frank Flannigan probably wishes he'd taken a vacation as he's made to look foolish on the infant medium known as television. The plot concerns the murder of a nasty advertising executive for the Quick Silver Tobacco company which was thinking about sponsoring a radio show starring Flannigan.

#6 - The Adventure of Colonel Nivin's Memoirs

A WW II spy, Colonel Alec Nivin, is on a book tour in New York concerning his memoirs in which he accuses a variety of people of war crimes and treasonous acts. Ellery's galpal, Jenny O'Brien, finds the erstwhile spy dead in his hotel room having been stabbed with an antique dagger. Everybody except Jenny is a suspect in this one.

#7 - The Adventure of Veronica's Veils

Burlesque producer Sam Packer is found dead of an apparent heart attack but he leaves behind a video to be shown at his funeral in which he states that no matter what it looks like, he will be murdered. Packer, in the video, asks radio mystery star Simon Brimmer to solve his murder. Packer's widow, knowing that Simon can't figure out his butt from third base, goes to Ellery and asks for his help. Brimmer once again tries to best Ellery and once again is 100% wrong.

#8 - The Adventure of the Black Falcon

Simon Brimmer arrives at a restaurant where he is to give a live-remote broadcast of his highly rated mystery radio program. Ellery and the Inspector are invited to attend. As you would figure, a murder is committed on the premises. One of the owners is poisoned by a bottle of wine. Can Simon beat Ellery to the solution of the case? Of course not.

#9 - The Adventure of the Comic Book Crusader

Ellery himself is a leading suspect in the murder of a comic book publisher with whom he'd clashed over how he was portrayed in the publisher's comics. It seems as though the man left a dying clue which apparently points to him. Ellery is forced to investigate in order to clear his name. Ole Frank Flannigan is on the scene too trying to steal some of the glory.

#10 - The Adventure of the Pharaoh's Curse

Norris Wentworth buys and brings an Egyptian sarcophagus to display at the world famous Tremane Museum. Wouldn't you know it, there's curse on the darn thing. The six previous owners have all kicked the bucket under mysterious circumstances. Needless to say, Wentworth becomes victim number seven but is he really the victim of a mummy's curse or is there some other motive in this wild, wild case?

#11 - The Adventure of the Judas Tree

The Queens investigate when a wealthy industrialist and war profiteer is stabbed to death with a Chinese ceremonial dagger and then dragged out of his house and hung from a tree with a crown of thorns placed on his head. Just like one Judas Iscariot. As usual, plenty of suspects abound and when it's discovered that the victim was dying of acute lymphoma the plot only thickens.

#12 - The Adventure of the Blunt Instrument

An awards dinner sponsored by the Crime Writers of America is being held at the residence of writer Edgar Manning who is the recipient of the Blunt Instrument Award. Ellery is not present at the dinner due to the fact that he's home sick with a head cold. Nasty, egotistical Manning calls up Ellery on the telephone in order to gloat about his win and is murdered while speaking with our hero on the phone. It might take a quantum leap for our hero to solve this one.

A wealthy heiress dies. She jumped off the balcony of her elegant home (or did she?). Was it suicide... or was it murder? The twist: she was reading one of Ellery's own murder mysteries at the time and she died exactly the same way as the victim in the book.

#14 - The Adventure of Auld Lang Syne

The time: 10:00 pm, New Year's Eve, 1947. The place: The ballroom of the Hotel Astor. The victim: Mr. Marcus Halliday. And the suspects (all the usual ones): the son (and his gold-digging girlfriend), the untrusted nephew, the long-time secretary (and her brand new fiance), and the new business partner (of course, stealing from the company behind the victim's back). The soon-to-be victim has just announced that he plans to disinherit all of the above before the night is out - only to be found minutes later, slumped over in a nearby phone booth. Can Ellery figure out the clues as they play out? Of course, he can. But can you?

#15 - The Adventure of the Sinister Scenario

Ellery and the Inspector travel to Hollywood in order to watch the filming of an adaptation of one of Ellery's novels into a movie. At the studio, they meet the actors who will be portraying them. Gilbert Mallory, the egotistical no-talent assclown slated to play Ellery, is found murdered and once again there's little rest for our weary heroes.

#16 - The Adventure of the Tyrant of Tin Pan Alley

The radio payola scandals of the 1940's and 50's are recalled in this episode. Simon Brimmer once again tries to best Ellery and once again falls short. The plot concerns the murder of popular songwriter Alvin Winer during the musical interlude on a radio show when he goes to the station's record library to find a record. Ellery once again must clear a friend who had just accused Winer of stealing his song.

#17 - The Adventure of Caesar's Last Sleep

Inspector Queen is in charge of protecting a mob witness but the witness is murdered before he can testify. Wouldn't you know it, the evidence points to none other than Sgt. Velie. The Inspector must also deal with rivals in the department who feel he's gotten long in the tooth and relies too much on Ellery. Will Ellery be able to figure out the correct solution? Not in this episode, he doesn't.

#18 - The Adventure of the Two-Faced Woman

Simon Brimmer once again fingers the wrong culprit in this tale about the murder of a socialite who was apparently leading a double life. The case has its underpinnings in events that happened in 1922 France. It's a hard road to the solution and Ellery takes the correct one as usual.

News mogul Henry Manners is murdered in an express elevator to the 12th floor of his building with nobody inside the elevator except the victim. The suspects include Manners' sister who had previously run the paper while her brother was absent in WW II, the right-wing columnist who was always getting the paper into legal hot water, the Editor being forced into retirement, and (yes, you knew this was coming) the paper's lawyer. Ole Frank Flannigan is on the scene too making the usual nuisance of himself and trying to beat Ellery to the solution. They'll have to take things one day at a time in this case.

#20 - The Adventure of the Mad Tea Party

Ellery and his agent, Howard Biggers, travel to the estate of the wealthy and eccentric Spencer Lockridge. It seems as though Biggers wants to turn one of Ellery's books into a play and is trying to get Lockridge to provide the financial backing. All goes for naught when Lockridge disappears while wearing a Mad Hatter's costume from the Alice in Wonderland theme party he was throwing. Whodunit? Could it have been someone from New York or maybe even Dallas?

#21 - The Adventure of the Sunday Punch

A boxer is killed while training for a championship bout and the finger points towards his sparring partner, Joe Adams. Joe's girlfriend, Corrinne Ogden, seeks out Ellery for help in clearing her boyfriend's name. Ellery accepts the challenge of proving Joe's innocence but it seems that the dead boxer had nearly as many enemies as Bugs Moran. Making things even more complicated is the fact that good old Frank Flannigan is also on the scene trying to beat Ellery to the solution.

#22 - The Adventure of the Wary Witness

Ellery's old college chum, Linville Hagen, is accused of murdering mobster Nick Danello and Ellery must find a missing witness who can prove his innocence. This missing witness was a woman wearing a green dress. This description, of course, could fit any woman in New York. Ole Frank Flannigan comes along for the ride too and this time he's not quite so antagonistic towards Ellery.