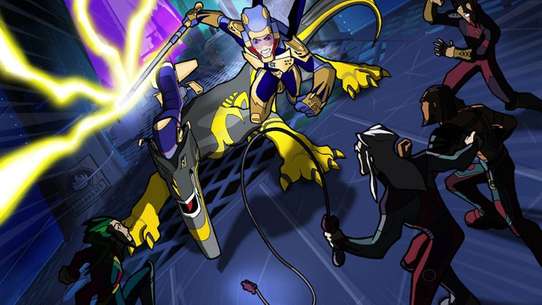 The BEST episodes of Dragon Booster

A teenager named Artha Penn teams up with a dragon named Beau and Artha was the chosen hero called the Dragon Booster.

When Artha is simultaneously required to participate in a street race, speak to the Down City Council, and Dragon City Security, Lance and Parmon volunteer to help him out by posing as the Dragon Booster, while Kitt is abducted by Moordryd's crew as a trap for the Dragon Booster.

Artha, exhausted from both street racing and his training as the Dragon Booster, accepts a sponsor to help him win an upcoming race, but the sponsor is actually Word Paynn, and the new gear he receives puts Beau firmly under Word Paynn's control.

In the final elimination race, Armeggadon tries to destroy Artha and Beau. Moordryd and Artha find out each others secret identities and join forces along with drakkus and Mortis to defeat Armeggadon in the Battle for the Ages.

Mortis detects a powerful energy surge beneath Dragon City, and Artha insists on investigating it despite being warned that it is too powerful even for the hero of legend.

Only one more Academy event remains: the Dragon City Academy Dragball Elimination Challenge, but Artha gets badly hurt fighting with the Shadow Booster. Will he take part or will he quit. Find out in the awe inspiring conclusion of Dragon Booster. The Episodes will now continue in: Dragon Booster Academy.

Artha falls into a trap set by Word Paynn and finds himself deep below Dragon City where he meets the short, reclusive leader of the Dragon Keepers crew. But he is also near the lair of an energy-draining dragon called the Muhorta, which Word plans to use to capture the Dragon Booster and dragon of legend.

Moordryd challenges a prideful Dragon Booster for ownership of the legendary dragon Beau, secretly planning to use the Furox artifact to control Beau and deliver the dragon of legend to his father.

A bank hiest implicates the Dragon Fist crew as responsible, and Moordryd challenges Phistus, the crew's leader, for control of the Down City Council, using a type of dragon developed by his father -- an invisible "wraith" dragon -- to defeat Phistus in the process.

Moordryd and Cain kidnap Lance to lure the Dragon Booster into an ancient cave known as the "Shadow Track"; all four of them become trapped inside, and subjected to their own fears.

Artha misplaces his golden amulet; Lance is tasked with recovering it while Artha tries to stop a plan by Word to breed an army of pure black dragons.

The group go to an ancient Green draconium Stronghold where the rest disappear and Parm is tested to see if he is worthy of a great power.

During a marathon race, Artha and his friends fall into a trap by Moordryd and land in the ancient Track of Doom, realm of the ancient, warlike Dragon Prophets; they must convince the dragons that they have the strength to prevent a new war between dragons and humans.

Artha misjudges Kawake, retired champion of the sport of drag-ball, after which Word Paynn tricks Kawake into mining for black draconium directly below the city's support columns.

The gold dragon chose Artha as its rider, but his friends are attacked by members the Dragon Eyes crew. Meanwhile, Artha is taken to an underground temple and given an ancient gauntlet that transforms him into the hero of legend, the Dragon Booster.

The dragon racer Pyrrah, normally one of the cleanest racers on the street, falls under the power of black mind-control gear developed by Word Paynn, and abducts Artha's younger brother in order to lure Artha into a trap.

Word Paynn challenges the Down City crews to recover an ancient artifact called the Furox, and Kitt Won, angry at not being thanked for helping Artha win a street race, is used to retrieve it.

Artha is given rare deflection gear to help him win an upcoming race, but Moordryd plans to steal it, Parmon swaps it out for homemade gear of his own, and Lance replaces it with an outright fake.

Cain and a bunch of the Dragon Eyes bail on Moordryd and start their own crew. What will happen to Moordryd now?

Word sets a trap to turn Artha and his crew into zombies; but the plan backfires on him.

Moordryd finds a black draconium bone mark called the Vysox and Decepshun absorbs it permanently, growing more powerful. Moordryd also finds a map leading to the Bone Marks of the League of Eight. Will Artha and Beau be able to stop them before the most powerful dragons of the Dragon Human War are released?

Artha's father, Connor Penn, has successfully bred a gold dragon, a breed considered extinct and spoken of only in ancient legends. The gold dragon Beaucephalis must choose a rider, but Word Paynn sends his son's crew to attack Connor's home and steal the dragon.

Connor's vendetta against Word threatens Artha's chances of winning the sole spot at the prestigious Academy.

Artha begins to doubt himself as a leader, even as Word Paynn is capturing dragons of every element to synthesize an artificial legendary dragon of his own.

Propheci returns to Dragon City looking for revenge and has captured Stewardd to be his slaved rider.

Moordryd wins a race by cheating, and acquires its prize -- an ancient horn whose call summons a legendary grey dragon whom his father plans to use for inciting a new war.