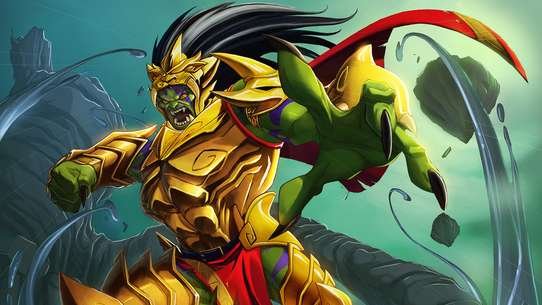 The BEST episodes of Chaotic

Every episode of Chaotic ever, ranked from best to worst by thousands of votes from fans of the show. The best episodes of Chaotic!

Chaotic tells the tale of a teenage boy named Tom and his friend Kaz. They both play the Chaotic Trading Card/Online Game. Kaz always tries to tell Tom about a secret code to play for real which Tom refuses to believe. While playing online Tom receives the special password. When he enters the password into his game scanner he is transported to a place called Chaotic that is able to take him to another world where the characters, locations and items in the card game come to life.

Tom and Kaz go on a topsy-turvy adventure when they look for Sarah and Peyton in Kirvak Mound (a series of cavern within Skeleton Springs). They soon discover that the effects of Kirvak Mound has deaged Sarah to a little girl and aged Peyton to an old man. They now have to evade prehistoric creatures to find their way back. When they look for Sarah, they find other portals leading to various points in history which would lead to various futures. It is later discovered by Rhaden that the portals in Kirvak Mound are actually possible futures of what will happen to Perim

When CodeMaster Hotekk's defeated Creatures join forces, it looks like Tom won't win his latest CodeMaster Match. But a shocking series of amazing events allows Tom and his friends to transport to a strange, primitive location that ultimately unlocks a secret that could change the course of Chaotic history.

Maxxor is confronted with the most agonizing decision of his life when Batog, an unstoppable creature out for vengeance, invades the OverWorld and presents an impossible demand: unless he battles Tangath Toborn, Perim will be destroyed. With Tangath still trapped in the ice at Glacier Plains, Maxxor must choose between his friend's life or his world's survival!

Tom's match against Crellan continues. He manages to defeat Cromax several times, only for him to keep coming back. After Tom finds the reason for this problem in the form of Ariak, the battle comes down to Maxxor vs Cromax. At that point, Klay and Krystella's little trick becomes Tom's trump card.

After a seventh, hard-won battle in the Hotekk Drome, Tom gets the call he's been waiting for: it's CodeMaster Hotekk, challenging him to a CodeMaster Match.

Troubled that the leader of the Ancient OverWorld is an ancestor of Chaor, Tom goes to see Najarin to learn more about the history of Perim. Puzzled by Najarin's strange behavior, Tom returns to Ancient Kiru City to discover it has been attacked by Kaal, a diabolical UnderWorlder who holds the pre-historic Perimites in his fiery clutches.

Tom rescues a player in the wilds of Perim and battles him to gain some tips, finding that the player is actually a CodeMaster.

Peyton wants to trade Mipedian creatures for Tom's scan but Tom declines as he distrusts them after what happened with Reggie and Mudeenu. He says Overworlders are better so Peyton takes him to the Mipedian desert. Tom's opinion changes when he and Peyton are attacked by an evil scorpioid Overworlder named Slruhk.

Tom finally has a new scan of Maxxor, but when he transforms into the awesome OverWorld leader during a Drome match, Tom makes a startling discovery – the once brave warrior is now a quivering coward. Seeking to unravel the mystery of Maxxor's illness, Tom must 'port to Lake Ken-i-po to consult with Najarin – if he can survive the Mugic trap inside the old wizard's castle.

Peyton becomes embroiled in international intrigue when he's kidnapped by a mysterious agent who informs him that his Chaotic expertise is the only thing that can persuade a notorious art forger to work for the forces of good.

When Kaz and Peyton are at the Lava Pond to obtain a scan of Zapetur, they are attacked by the M'arrillian Milla'iin, who is doing mysterious work with a hypnotized Khybon. Tom, Kaz and Peyton battle for the attention of a beautiful newbie named Shinwan who exhibits her skill in the Battledome by defeating Klay in her first ever drome match.

Tom camps out at Lake Ken-I-Po to obtain a scan of Najarin, and decides to track the creature, leading him to a pack of UnderWorld raiders.

Tom's first match in Chaotic is off to a shaky start. No one told him that, when you play in the Chaotic BattleDromes, you become the Creatures! Soon, Tom discovers there are even greater surprises in Perim, the world outside Chaotic. As he reels from the reality of his "split personality" created by Chaotic technology, he struggles to survive his shocking "ScanQuest" in Perim while he races to recover his discarded scanner back on Earth.

After seven victories in the Crellan Drome, Tom is challenged to another match by CodeMaster Crellan. In preparation for his match, he scans Mugic that he is tricked by Klay and Krystella into believing it will double his power, but it really switches their stats. Can Tom overcome this bump in the road and defeat CodeMaster Crellan?

Both Tom and Kaz have six wins in the Imthor Drome so Tom surprises Kaz with a Drome challenge with the winner going on to face CodeMaster Imthor. However, when Kaz accuses Tom of cheating and Tom admits to it, CodeMaster Imthor bans Tom from Chaotic Battles while it is investigated.

Chaotic – a game of stealthy strategy, incredible Creatures and miraculous "Mugic" – is sweeping the globe. Players trade unique, coded Chaotic cards online and in person. When Tom's best friend – rabid Chaotic fan Kaz -- insists Chaotic is a real place where players can transport to and do battle, Tom writes it off as a fantasy gone too far. But when Tom receives a mysterious password via his Chaotic Code Scanner, he learns the amazing truth and embarks on the adventure of a lifetime!

An unusual UnderWorld Creature named Phelphor is found frozen inside Ice Pillar by UnderWorlders. In the castle, Chaor, Agitos, and Takinom are amazed by Phelphor's tale of a lost tribe called M’arrillians and their discovery of the Cothica, Perim's greatest treasure, which they hold behind the Doors of the Deep Mines. Chaor states they will discuss opening the Doors to retrieve the Cothica.

Chaor and Lord Van Bloot's armies fight, with Chaor going after Phelphor. Phelphor mind controls the guards into opening the Doors of the Deep Mines first, letting out a flood of murky brown water that washes away everything in its path. Tom, Kaz, Peyton and Sarah scan the door as it opens but are forced to port to keep from being washed away.

Tom promises to save the creatures of Prexxor Chasm from the disease ravaging them. Tom, Kaz, Peyton, and Sarah stop by Lake Morn to see its caretaker Garv, who may be able to help if he gets a sample of the disease.

H'earring leads Kaz to where Milla'iin was last sighted but ends up taken over by his mind control. Meanwhile, Tom is constantly bugged by Evan to battle Tom's Maxxor. Tom is informed by Sarah and Peyton he is an UnderWorld Player and Tom finds Milla'iin on his team.

After writing a school essay about the how Chaotic is a real place, Kaz is sent to a psychologist by his worried mother. Kaz better prove he’s trie telling the truth about Chaotic -- before his mother took Kaz's scanner.

The Codemasters initiate an emergency order to recall all Chaotic Players and shut down the Transport Systems as Perim is too dangerous with the M'arrillians about to conquer it. While Tangath Toborn leads a group to Glacier Plains to attack the M'arrillian base there trying to melt the glacier and flood the Overworld, Phelphor's army surrounds Kiru City.

The three go to Kiru City, where Najarin tells them he suspects Tartarek is a traitor to the alliance. Kaz, still in Chaotic, battles Tartawrecker to try to find proof. In M'arr, Chaor rescues Maxxor, they set aside their differences to capture Aa'une and succeed in taking him to Lake Blakeer.

With his powers enhanced from Lake Blakeer, Aa'une unleashes a devastating mindwave that races across the Overworld and reaches Kiru City, where the Tribal Allies watch in horror.