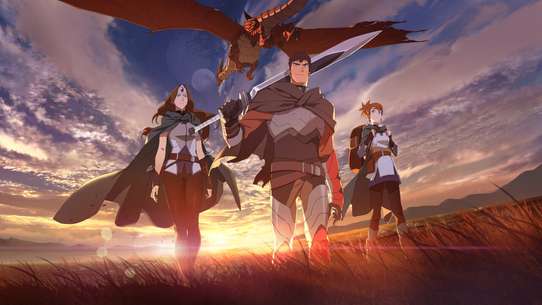 After encounters with a dragon and a princess on her own mission, a Dragon Knight becomes embroiled in events larger than he could have ever imagined.

Does creation require destruction - and painful sacrifices? Filomena and Davion square off againist the Invoker. The truth remains the final weapon.

Darkness reveals itself — and demands sacrifices. Davion lays it all on the line, Bram rises to the occasion, and Mirana fights for the power within.

A leader rises: Davion confronts a fake. Lina confesses. Fymryn grapples with guilt, a demon and a promise. A power behind the scenes materializes.

Undeterred, Filomena hunts for hope as a changed Davion reaches out to Mirana. But now a brutal battle promises to shatter everything for the heroes.

Another day dawns - and a world begins. In the hinterlands, a threat spreads, spurring Mirana and Luna to investigate. The Oracle holds the key.

Old compatriots — and enemies — reemerge. Mirana and Fymryn try to right wrongs, but a goddess has other plans, and cruel oblivion beckons.

A new moon rises. Mirana and her warriors enter Foulfell, as insidious realm where fresh hells - and regrets - await. Can Terrorblade be vanquished?

#8 - Desolate and Empty the Sea

The ties that bind: Mirana makes a deal for an army. Bram's match reveals a new side. Davion heads to the Helio Imperium for the Eye of the Worldwyrm.

Mirana and Marci lend a hand to Davion, who remembers little. The Black Market calls; Davion spits out a telltale ring — and unleashes a beast within.

In a quest to find Slyrak, Mirana taps a familiar Dragon Knight. Filomenta faces her struggling goddess - and father - as the moon threatens all life.

Drysi strikes a terrifying bargain. Luna appeals to Mirana, as does an unexpected foe. The tables turn for Fymryn, and Davion takes on a trying test.

A grieving father invokes a daughter's memory. Up to her old tricks, Fymryn rushes into a dragon's nest, leaving Davion to risk it all.

The gang copes with a bumpy landing while the Order goes to war. Slyrak rampages, and Davion must reckon with the powerful spirits of ancient dragons.

There's no rest for the righteous: Dragon Knight Davion makes an ominous discovery and meets a princess with a plan. A fiery fight burns its hero.

A swarm like no other attacks the hold as a squire steps up and a patriarch plays on deep fears. Desperate for help, Mirana finds a refuge — or is it?

Mirana encounters a surprising opponent while Filomena embarks on a desperate attempt to get answers via Mene`s memories. A sleeping giant awakens.

Fear summons a goddess; Davion looks to a brooding brother for answers — or a fight. Fymryn's rescuer faces a powerful luminary, ready to declare war.

In a hard homecoming, Mirana returns to an uncle`s maneuvers and a father`s wisdom. Filomena uncovers the awful facts. Davion rekindles a partnership.

With faith and trust in short supply, chaos descends on siblings. Davion's group shelters with a unique dragon as a princess returns to her origins.

Fymryn and Luna appeal to their goddesses. The Invoker delivers tough truths to Davion and Mirana; later, a bargain is struck.

A goddess full of regret, an elf discovered, and a princess on a precipice: Mirana's beginnings come to light as the hunt for an assassin heats up.

After striking a deal with a demon, the Invoker faces Selemene. Mirana and Luna marshal the troops. Davion makes a discovery with deadly implications.

Has Davion's song faded? Lina battles Slyrak. A poetry-spinning dragon ushers in the sunlight, and then a shocking power play shakes the Imperium.

Dream on: visions drive a haunted Dragon Knight and a gifted lotus thief. Fymryn sets out to find her sorcerer as a treacherous path humbles Mirana.