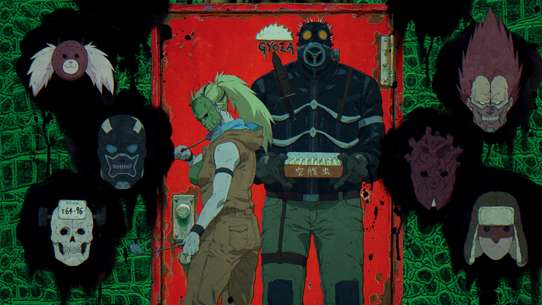 The BEST episodes of Dorohedoro

Every episode of Dorohedoro ever, ranked from best to worst by thousands of votes from fans of the show. The best episodes of Dorohedoro!

In a city so dismal it's known only as "the Hole," a clan of Sorcerers has been plucking people off the streets to use as guinea pigs for atrocious "experiments" in the black arts. In a dark alley, Nikaidou found Caiman, a man with a reptile head and a bad case of amnesia. To undo the spell, they're hunting and killing the Sorcerers in the Hole, hoping that eventually they'll kill the right one. But when En, the head Sorcerer, gets word of a lizard-man slaughtering his people, he sends a crew of "cleaners" into the Hole, igniting a war between two worlds.

Plotting to avenge Matsumura, Fujita joins the Hole Peace Hospital’s baseball team: their rival team has his friend's killer Caiman on the roster.

#2 - The Mushrooms Are Ready / The First Smoke / Manhole Elegy

Caiman sneaks into the festival grounds in pursuit of Risu. Meanwhile, En tells Fujita the story of how Shin and Noi became partners.

Nikaido dons a powerful mask to defeat her enemy, only to find the attack was a trap by En. With Tanba's help, Caiman visits one of the Cross-Eyes.

Caiman tries to convince Nikaido to return to the Hole with him, but her contract with En binds her. After the fight, En launches a search for her.

As a member of the family, Nikaido learns why En needs a sorcerer who can manipulate time. Caiman disguises himself as Tanba's wife to rescue her.

In the sorcerers' world, Caiman and Nikaido locate a man with cross eyes, but the trail goes cold when Shin and Noi show up on a mission.

#9 - Night of the Dead / Duel! In Front of Central Department Store

Caiman and Nikaido take part in the annual Night of the Living Dead. But before they can finish their mission, Shin and Noi show up to finish them.

Caiman and Nikaido hunt for the sorcerer who cursed him with a lizard's head, while Fujita returns to the Hole to avenge Matsumura's death.

"Cleaners" Shin and Noi get to work in the Hole. Meanwhile, Caiman and Nikaido search for a sorcerer who uses acupuncture to change faces.