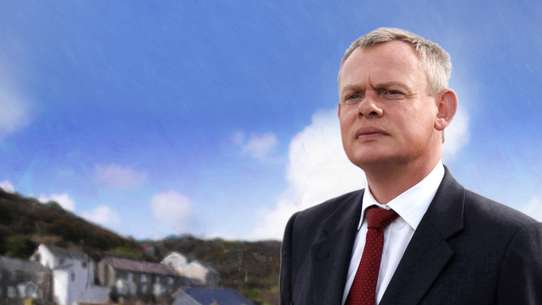 The BEST episodes of Doc Martin

Every episode of Doc Martin ever, ranked from best to worst by thousands of votes from fans of the show. The best episodes of Doc Martin!

Make an appointment with the brilliant but socially awkward and neurotic Doc Martin. When Martin develops an aversion to blood, he abandons his career as a celebrated London surgeon and becomes the only doctor in a sleepy small town where his tactless manner soon has the whole town in an uproar.

Martin and Louisa are about to get married but will it ever happen. Martin is feeling irritated by PC Penhale, who wrongly believes that he is going to be the best man and Louisa is also late for the service. The vicar has serious doubts as to whether she will turn up, leaving Martin on edge. After she finally arrives the couple are married. Things after the wedding don't go as Martin hoped and Ruth has a difficult time looking after James.

Louisa is leaving for Spain, Bert and Jennifer's engagement party goes off with a bang, and Al is hailed as a hero for saving Caroline's life.

The village are throwing the Ellinghams a farewell party - Ruth is helping Mrs Tishell deal with the news and encourages her to attend, but it seems that Martin and Louisa aren't going to make it because a farmer has spotted their lost dog!

When Martin is talked into taking baby James to playgroup, he is forced to sing along with the other mums. As the parents pair up, one of them says she is worried about her daughter, to which Martin replies that the girl is probably just backward. Al helps Ruth move into a cottage in the village where she meets her new neighbour, a grumpy old man called Moysey. When Moysey goes for a repeat prescription for his asthma, Martin notices that his breathing has got worse - but he takes exception to being poked and prodded. Al admits he would like a girlfriend and asks Morwenna if she has any single friends. Morwenna asks her mate Janice, who is not impressed by the idea. So a desperate Al decides to sign up with Cornish Couples, a dating website.

The news of Martin's Imperial College job offer is flying through the village, but the Ellinghams are yet to make a decision - meanwhile, Caitlin blames Bert for the pub flood.

Dr Martin Ellingham and Pauline are surprised by the number of patients coming to see him on the last day before his Surgery closes and he moves to London.

#7 - The Practice Around the Corner

Mrs Tishell returns to the village. Martin has to work out what is wrong with beach comber Lorna. Al and Morwenna have an internet dating disaster, and romance is blossoming for Bert and Jennifer.

#8 - The Holly Bears a Prickle

Martin and Louisa go on a date, but his usual bluntness ruins a romantic moment, and Louisa ends the struggling relationship. However, a friend of Louisa's visiting from the City, Holly, injures her back on the beach, and is forced to remain in Portween. Martin has to treat her at Louisa's house, while at the same time trying to overcome his own distraction at Louisa's dismissal of him. Episode is named "Breaking Up Is Hard To Do" in the US DVD release.

The curmudgeonly GP struggles to come to terms with his new role as a father, having planned to resume his career as a consultant in London before the arrival of his and Louisa's as-yet unnamed son. To make matters worse, he begins to have serious doubts about the competency of his replacement Dr Di Dibbs when she misdiagnoses a patient as well as herself. Martin is then dealt a devastating personal blow after hearing his aunt Joan has died. (This Episode Is Rated TV-PG-V)

The surgery is chaotic with both Martin and Louisa now practising from it. Bert’s new business venture with Al isn’t off to a good start and Penhale suspects some ghostly activity.

Mrs Tishell decides she can no longer hide her love for Martin and, fuelled by a cocktail of drugs, takes drastic action. While James Henry is in her care, she boards a bus out of Portwenn and leaves a message for Dr Ellingham to `meet them at the castle', forcing Martin, Louisa, Ruth and PC Penhale to mount a desperate search for the pair.

It's Martin's wedding day and he manages to offend the vicar who is due to conduct the ceremony by suggesting he has a drink problem. When they struggle over a bottle of whisky, the vicar falls over, fracturing his pelvis and Martin has to find a replacement. Pauline suggests the former vicar of Delabole, who strikes a deal. He will conduct the wedding ceremony if Martin will examine his sick pig. Bert and Al are putting the finishing touches to the wedding banquet when disaster strikes. Last in the series. Episode is named "In Sickness And In Health" in the US DVD release.

Dr Martin Ellingham is in London to meet with Robert Dashwood, who is leading the selection process for the prestigious London surgeon’s job that Martin has applied for. Robert can tell that Martin is excited to be back in the world of surgery, and is pleased that Martin has finally conquered his debilitating blood phobia. Robert is confident that Martin will get the job.

The Doc’s blood phobia is getting worse, as is his consequent insomnia, which is also beginning to disturb his wife Louisa in the marital bed. Maybe it’s time he saw that psychologist his Aunty Ruth recommended, particularly when there’s an unfortunate and very public incident involving Doc Martin, dopey police officer Penhale and a staple-gun. Penhale (John Marquez) causes widespread panic in Portwenn after jumping to conclusions about an asbestos scare.

Martin rubs up against the new herbalist and Penhale, Louisa and James are all interested in Janice's new pedicure fish. Ruth is back from Mexico with more than maracas.

Martin and Louisa are off to London for Martin to present his research paper - Janice is looking after the children, but things don't go smoothly when Penhale tries to help. Martin also has a few hiccups, including an unexpected proposition or two...

Anthony and Terri Oakwood move in next door to Louisa with their son, Sam, who is given extreme freedom by his parents to express himself. The new arrivals interrupt a planned dinner between Louisa and Martin, and Martin leaves abruptly. Episode is named "Love Thy Neighbor" in the US DVD release.

Martin prepares to face his hearing, but despite having closed the practice, he finds all his patients are trying to make appointments. An American tourist who visited Portwenn previously returns to the town, hoping to research her family tree. However, she also has a medical issue, and comes to the troubled doctor seeking his advice. Louisa goes to see Chris to find out how serious the situation is, while the townsfolk take steps to show Martin how much he is appreciated. Sigourney Weaver reprises her guest role from the previous series. Last in the series.

Dr Martin Ellingham struggles to deal with Louisa’s news. But Louisa is adamant she does not want Martin involved.

During an examination, Mrs Tishell is smitten by Martin holding her hands and staring into her eyes, and falls head-over-heels in love with him again. Two military policemen call at the police station looking for Mike Pruddy. Al pretends not to know Mike, then goes to warn him the army are looking for him. Louisa has shocking news for Martin.

The GP returns to his former post at the surgery after the departure of Dr Dibbs, agreeing to stay until a replacement is found. He persuades a reluctant Louisa to move into his house so he can help raise their son, and suggests they could all move to London together in the future. Martin then delivers the eulogy at his aunt Joan's funeral and speaks to her sister Ruth, who proves to be just as cantankerous as he is.

Martin rushes to Ruth's for a medical emergency, and preparations for Morwenna and Al's wedding do not go to plan. Elsewhere, Martin takes his final GMC assessment under the watchful eye of eminent surgeon Bernard Newton, who monitors Martin's skills in assisted surgery. Last in the series.

The GP is left holding the baby after upsetting the new childminder, but luckily Mike agrees to look after James at short notice. However, Louisa is not happy with the arrangement and an argument erupts between the newlyweds just as their guests arrive for dinner - and that's only the first of the evening's problems.

A stranger stops dead in his tracks when he sees Ruth in the village, and later he spies on her when she is having a coffee with Caroline. Ruth is not sure why, but she starts feeling uneasy. One of Louisa's pupils blames an upset stomach on a meal she ate at Bert's restaurant and writes about it in the school magazine. Bert and Al are furious, and they go to see Louisa wanting something to be done.

Louisa worries Dr Timoney's suggestion that she and Martin aren't meant to be together might have prompted him to leave Portwenn for good. Calling on Ruth, Morwenna and Janice for help, she tries to track the down the missing GP, with no luck. However, what Dr Ellingham's friends and family fail to realise is that he is actually trapped up at the Winton farm, where desperate wife Annie is trying to coerce him into performing a life-saving operation on her terminally ill husband Jim. Meanwhile, Ruth and Bert seek out Al to offer him a proposition regarding the whisky and the B&B.