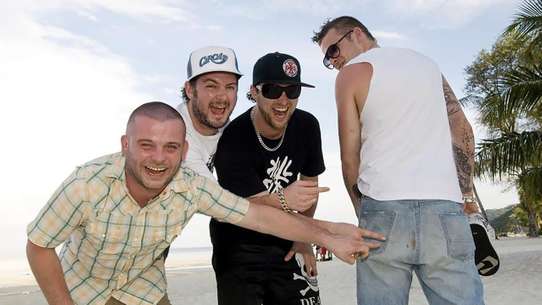 The BEST episodes of Dirty Sanchez

This is the story of three mates from the Welsh valleys and one warped Southener. They met through a mutual love of skateboarding and are bound by a complete disregard for their own personal safety. Their juvenile behaviour leads them into ridiculous circumstances as they constantly strive to achieve their next hit of twisted humour. This is Dirty Sanchez.

This weeks show gives Pancho a slightly easier ride as he dislocated his finger on the last shoot and could only use one hand. So instead of messing with him, they take a philosophical turn to describe the various types of pain they've encountered over the years and the newly discovered cold pain. The boyos go through a week of martial arts training and at the end perform a show for a drunken crowd at the end. All in all they did well for once.

This episode sees th Sanchez boys taking on the sin of Greed in the Dominican Republic.

This week the boyos are taking on the Royal Marines, as well as tearing hooks out of their ears any way they can. This episode involves indurance, stamina and pritchard vs. claustrophobia. Allthough they do prove something ''if you're thinking that you can make it in the marines, think again'' Finally they do an assualt course to finish the week and pancho wins. At the end of the show, they have the 'Sanchez Olympics' with the metre of mustard,the nuts nappy pin,and my personal favourite the piss bong.

""Greece, the home of democracy, the olympics and fetta chesse"" The boys try it alone tonight leaving Johnny B back in Germany. While in Greece they try their version of the olympics and compete in the sh*tput, Pancho faces his fear of heights again, and Dainton and Pritch play a test of strength with fishing rods and each others ears.

In this episode the boyos experiment with hot coals and waxing...nice. Later, after using a jogging machine, they collect all their sweat in a jar and hold an endurance contest to see who has to drink 'The Essence of Sanchez''. Joycie says he won't lose, but he does with hilarious consequences. Finally Pritchard does something odd with a bathtub-hose pipe-and himself plus two ''hefty pints'' the results are unforgettable to say the least.

""Italy, the home of pasta, passion and revenge."" The tension levels are through the roof after 5 relentless weeks of sleepless nights and painful pranks. The boys are left without transport after the busdriver quits, and Pritch and Panch are left without hair courtesy of Dainton.

The Welsh nutters are taking on the sin of Anger in Russia...

Tonight, the psychologist looks into Pritchard's pain barrier, Dainton's disorder, why Dan does this, and why Pancho puts up with it all.

this week the sanchez boyos try there hand at the building trade and cement pancho's feet into to buckets...surely his day cant get worse..can it? later pancho passes out (as usual) and pritchard and dainton put a bycicle d-lock around his neck and joycie swallows the key. pritchard skives off this week after armwrestling his boss for the rest of the day off and describes how he is still ''a gamblin' man) so he and dainton put there hands in vices and toss a coin if its heads pritchards gets tightened and tails for dainton.it came up heads every time.

This week, the boyos are gonna be cowpoke. Pritchard finds out what happens when you fall asleep in the desert (it involves his head and cacti). Joycie pleasures a horse, Dainton gets disturbed by a cow's tongue and Pancho....can't really do anything. In the end they shift some cattle and party as only Welsh guys can.

""Spain, the last stop, the home of flamenco, Brits abroad and bullfighting."" Panch takes the orange challenge, Pritch cracks open a maraca with his skull and Joycie takes vomit to a new extreme (definately not for the faint hearted).

""Czech Republic...the home of guns, beer and men behaving badly"" Pritch and guns, first he headbutts fired clay pigeons and then straps on a bullet-proof vest and gets shot. Pancho puts on a wedding dress and he and Pritch get married by Dan, who, unbeknownest to the others, is a certified marraige celebrant,

This episode sees th Sanchez boys taking on the sin of Envy on Thailand's Phi-Phi island.

The first episode sees the Dirty Sanchez crew taking on sloth right here in the UK.

"Germany..the home of liederhosen, frankfurters, and the love of control" This episode should be called the Daint episode. He pepper sprays Pritch, shaves off some of Pancho's hair. He finally loses a challenge with Pritch and scariest of all, gets suspended in the air off four body piercings. In all this, Pancho almost goes unnoticed, even though he momentarily overcame his fear of heights long enough to skydive.

This is a review of Season two, strung together with an interview with the job-centre person who arranged all these different jobs for the guys.

""In 2005, three Welsh dropouts and one warped Southener and me, Johnny B, embarked on a tour around Europe. Six countries, six live shows, four idiots, this is the story of what happened."" Welcome to the European Invasion, first stop Sweden. Pritch becomes a human crash-test dummy, the boys test their abilities to stand extreme changes in temperatures and the Dan and Pritch try the world's weirdest sword fight.

Tonight, we discover Pritchard's desire to be a stuntman; Dan gets suited and booted; Pancho finds his true vocation; and Dainton fails to impress the boss.

Tonight, they head for the slopes and face their worst fears. Spiders, snakes, pirhanas and pain.

Tonight, Dainton faces fatherhood; Pancho does his best to impress the ladies; Pritchard reveals his romantic side; and Dan sees if he can pull 'The One'

Tonight, Pritchard and Dainton continue their brainless battle, which has been raging for years; Dan Joyce strives to acheieve the ultimate shock tactic; and Pancho, the patron saint of public houses, has just one goal ... to stay awake

The boys try firefighting this week, chop-chop. Dan regrets not been given a leadership role, and Pritch has to deal with his claustrophobia.

This episode sees th Sanchez boys taking on the sin of Pride in Japan.