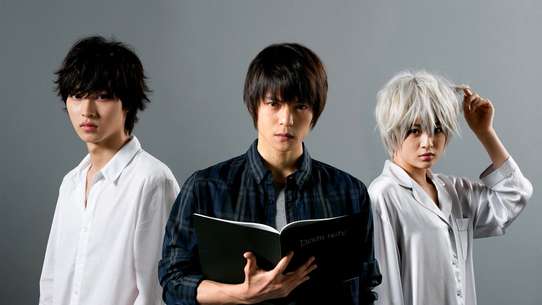 Death Note (デスノート) is a Japanese television drama series based on the manga series of the same name by Tsugumi Ohba and Takeshi Obata. Light Yagami is a genius high school student who discovers the "Death Note", a notebook that kills anyone whose name is written in it, as long as the writer has seen that person's face. After experimenting with the notebook, Light meets the Shinigami Ryuk, the notebook's original owner, who dropped the notebook to the human world out of boredom.

After a fierce back and forth, L is unable to find hard proof that Light is Kira... so he decides to go out and challenge him directly. Meanwhile, Misa (Hinako Sano), who has used the "shinigami eyes" she got from Rem to find out that Kira is Light, makes a move that no one could have predicted!

In order to save Sayu (Reiko Fujiwara), Soichiro (Yutaka Matsushige) and Light (Masataka Kubota) take the Death Note to the place indicated by Himura (Megumi Seki). Additionally, on the instruction of Near (Mio Yuki), Mogi (Jiro Sato) and the rest of the police prepare to storm the place.

Despite Soichiro (Yutaka Matsushige) putting his life on the line, L (Kento Yamazaki) is still not fully convinced of Light's (Masataka Kubota) innocence. In order to get L to accept it, Light joins the Kira Countermeasures Office's investigation. On hearing from Mogi (Jiro Sato) that Kira might be involved with a corporation called the Yotsuba Japan Group, Light swears to L that he will do everything in his power to arrest Kira and to prove his innocence.

Misa (Hinako Sano) is placed in holding by L (Kento Yamazaki) on suspicion of being the "Second Kira". As Misa finds herself cracking under L's interrogation-like questioning, she begins to beg, "Kill me..."

Light (Masataka Kubota) managed to write L's (Kento Yamazaki) name in the Death Note, but L rigged up something to keep from dying. Light finally admits that he's Kira, and L encourages him to turn himself in. Just then, Soichiro (Yutaka Matsushige) and the others come running in, but suddenly, something causes L to die. Having finally beaten L, Light decides to take back his Death Note.

Soichiro (Yutaka Masushige) has followed in the footsteps of L (Kento Yamazaki) in risking his life to stop Kira/Light. Light, who has made the decision to do whatever it takes to create his ideal, crime-free world, decides to mobilize the police force to get rid of Mello (Mio Yuki). But Mello has also erected a scrupulous set of traps, and intends to risk everything to prove that Light is Kira!

On learning that her savior Kira is really Light (Masataka Kubota), Misa (Hinako Sano) begins a reckless rampage to show her love for him. She tells Light that she acquired "shinigami eyes" to help Kira, and that she wants to use them to kill L. While struggling over whether to drag Misa into such a dangerous gamble, Light embarks on a plan to "show" L (Kento Yamazaki) to Misa…

Light (Masataka Kubota) has failed to kill FBI investigator Raye (SHOGEN) with the busjacking incident, and now L (Kento Yamazaki) is telling him that he thinks he might be Kira. Realizing that all of his plans have only served to increase suspicion targeted at him, Light is stunned into silence. On top of that, Ryuk has learned that Light's father Soichiro (Yutaka Matsushige) is the head of the Kira Countermeasures Office, and tells Light that he'll have to write his father's name in the Death Note if he wants to survive.

Ryuk warns Light (Masataka Kubota) that he's being tailed by an FBI investigator (SHOGEN). Light wonders how much L (Kento Yamazaki) already knows about Kira's true identity...The nervous Light begins a series of tests to figure out how to use the Death Note to get rid of the FBI investigator. Meanwhile, Soichiro (Yutaka Matsushige) is astounded to learn that L consideres his children prime suspects.

Light Yagami (Masataka Kubota) is an ordinary university student. One fateful day he receives a death note which changes his life. The death note slowly begins to awaken his warped sense of justice and genius. He becomes a murderer called Kira and punishes criminals.L (Kento Yamazaki) is a well known private detective. L appears in front of Light Yagami. L defines Kira as evil and decides to catch Kira. Then N (Mio Yuki), who has a beautiful appearance but dangerous existence, appears.

Higuchi Kyosuke (Shuji Kashiwabara) dies immediately after his arrest as the Third Kira. A rule in Higuchi's black Death Note, which reads "If the person using the Note fails to consecutively write names of people to be killed within 13 days of each other, then the user will die" forces L (Kento Yamazaki) to admit that Light (Masataka Kubota) must be innocent. He then asks that Light continue investigating the Kira with him as a friend.