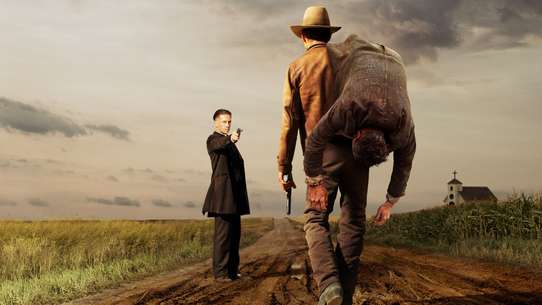 The BEST episodes of Damnation

Every episode of Damnation ever, ranked from best to worst by thousands of votes from fans of the show. The best episodes of Damnation!

Seth Davenport appears to be a small town Iowa preacher, but he harbors ambitions of starting a full-blown insurrection against the status quo. But he is unaware that an industrialist tycoon has hired a deadly professional strikebreaker named Creeley Turner to stop that insurrection by any means necessary. And unknown to those around them, these two men share a secret bloody past.

Negotiations commence between the farmers and the bank. But things turn bloody when Creeley divides the farmers.

Creeley meets his master on an exclusive hunting retreat, but finds there is more than one game at play; Seth infiltrates a nearby factory.

#3 - Dark Was the Night, Cold Was the Ground

Seth and the farmers take on the Black Legion with help from unlikely allies.

Seth and Lew are presented with an unexpected opportunity when banker Calvin Rumple is run out of town.

The premiere of the drama about a man masquerading as a preacher in the 1930s-era American heartland who leads an insurrection against the status quo. He soon butts heads with a professional strikebreaker hired by a tycoon to stop the uprising. Unbeknownst to those around them, the two men share a secret past.

When Bessie discovers the grand industrial plans for Holden, Seth and Amelia must decide whether to protect her from the Black Legion.

When a traveling carnival comes to Holden, a collection of new faces put Seth and Creeley on their toes, but it's a friend from the past that truly shakes things up.

Seth and the farmers ward off the Black Legion vigilante group; Creeley tries to learn more about his brother's new life.

Seth and Creeley must confront the truth about their past and figure out a way to survive the rapidly arriving future.

When the local farms face foreclosure, Seth and Amelia try to win them back; Creeley and Bessie run afoul of the Black Legion.